America has always had a distinctly Cancerian approach to football, they simply ignore any sport that happens outside their own borders.

Much like US foreign policy, letting the world go it’s own way until they feel their own family interests are threatened and then snap, those crab claws can really pinch. The rest of the world has known FIFA was corrupt for years but has just moaned occasionally and let them get on with it. But as soon as the US application to hold the World Cup in 2022 was turned down in favour of Qatar, the whole weight of the American judicial system comes crashing down on Sepp Blatter’s neck.

But now the process has started it has quickly acquired a life of its own. Within a few days all kinds of allegations are coming out. South Africa allegedly bribed a FIFA officials to get the tournament in 2010. We’ve had claims that Sepp’s mob gave the Irish FA 5 million Euros to stop complaining about Thierry Henry’s handball in 2009 that meant the boys in green missed out on the finals.

Even more bizarrely, there is the suggestion that Germany only got the 2006 tournament because their government bought vote of Saudi Arabia with arms sales.

It seems that if you want to get the World Cup in your country you have to think big. As is only natural in all football matters, England are useless, way behind their opponents. Our own pathetic attempts to grease the right palms in the quest for 2018 was to dangle invites to Prince William’s wedding and offer mulberry handbags to the wives of FIFA executive members. In football bribery terms that’s the equivalent of meekly surrendering and going out on penalties in the last 16.

The 2018 England delegation quite clearly hadn’t done their homework. Perhaps the should have studied the charts of the organisations and people involved.

The FIFA chart has the Sun conjunct Mars on the 9th house cusp in Gemini. This is absolutely what would be expected of a global ( 9th house ) sporting ( Mars ) organisation. But its also very interesting to see the main thrust of this chart through its very own T Square.

We have the grand scale noble social ideals of the Moon in Leo in the 11th house of associations but this is in opposition to Saturn in the 5th, suggesting some kind of dark shady arrangements with young footballing countries. This opposition focuses by T Square onto a twin apex Mercury, the trickster and Venus the planet of money in Taurus, the sign of money, in the 8th house, the place of other people’s money.

This T Square would be about as impressed by handbags as Oscar Wilde’s Lady Bracknell.

But another important point to note about this chart is the extremely elevated position of Neptune. Neptune is an highly spiritual and idealistic planet, but its role in the charts of business organisations or political bodies tends to be largely illusory and deceptive suggesting that things are definitely not what they seem. Neptune can often just be simply a con man.

Before I go on to look at the charts of individuals, I have to state that I am not suggesting that any of the following people have anything to do with bribery and corruption. After all, its a well known fact that astrology is mere hocus locus and any similarities between the charts of these moments in time is completely coincidental. But if the FBI do need any more evidence, then they might care to look at this lot. 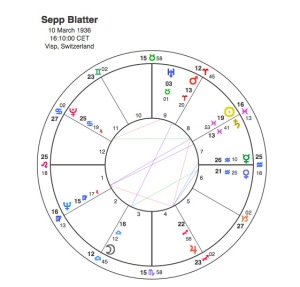 Unfortunately I don’t have birth times for the rest of the charts in this article so we cannot know whether any of these people, countries or institutions have an 8th house emphasis or not. But we also don’t need to.

Qatar became independent in 1971, the chart for the country has a T Square based on an opposition between Saturn and Neptune – now where have we seen that before – which focuses onto an apex Sun. I repeat any connection between the charts of Blatter and Qatar is entirely coincidental, even if they both have their Suns completely enslaved by those two criminals Saturn and Neptune.

And any connection between any of this and the chart for Blatter’s second in command Jerome Valcke is just chance. Even though Valcke has the Sun in a T Square including Saturn and the Moon in Taurus, the sign of money opposite a Mercury, Venus, Neptune trickster conjunction in Scorpio, the sign of other people’s money.

A Grand Trine on the cusp of material houses including both the Sun and Moon along with Saturn and Neptune may or may not indicate someone who has accumulated a vast fortune purely by taking backhanders.

Jack Warner has said that he will not remain quiet on the subject of FIFA’s fraudulent dealings which is exactly what would be expected of someone with a Grand Trine in Air signs. If he has to go down he will take plenty of others with him, which should add to the entertainment value.

Of course one guy already doing this, wearing a wire to catch his buddies in return for a few years off the expected sentence is Chuck Blazer. 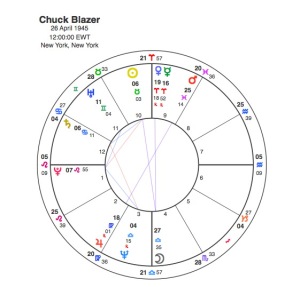 Blazer has the Sun in the sign of money in square to Pluto ( nasty shock ). He also has Saturn square Neptune.

Another FIFA Vice President widely regarded as Sepp Blatter’s heir apparent that was arrested in Zurich was Jeffrey Webb.

Webb appears to have a T square based on the Moon in the sign of money in opposition to deceptive Neptune and focusing on Venus, the planet of money. 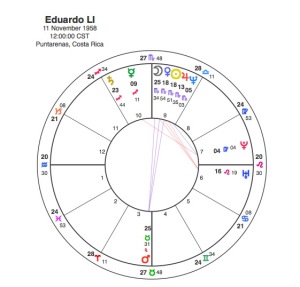 Another one Eduardo Li appears to have a stellium of 5 planets including the Sun and Moon and the planet of money in the sign of other people’s money. Most of them are opposed to Mars in the sign of money.

Jose Maria Marin has both the lights in the sign of money and Saturn is inconjunct Neptune. 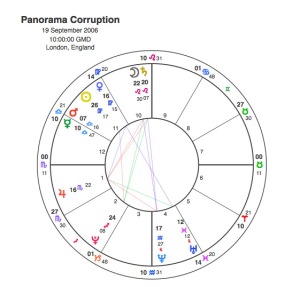 Here we have the Moon at the top of the chart conjunct Saturn opposite Neptune.

It would be interesting to widen the scope of the enquiry to include allegations of corruption from some of the multinational corporations that sponsor football. One of Capricorn Research’s favourite conspiracy theories was Nike’s funding of the Brazilian football team to the point where they could arrange friendly matches with other countries and allegedly even demand which players were to be picked for them.

These theories reached a head when the great Brazilian superstar Ronaldo who had suffered a serious knee injury was allegedly put under so much pressure to play in the 1998 World Cup Final that he had a pre match fit and was a shadow of his normal self whilst Brazil were thrashed by Zinedine Zidane’s France.

Needless to say the chart for the game had a square aspect between Saturn and Neptune.

Some readers might say that corruption has always been rife in football with players and referees taking bribes to throw matches and Malaysian betting cartels taking advantage of odd results. So why all the fuss now ? Is it because the FBI has finally hit on the whole thing or is it just simply because Saturn is now square Neptune.

Capricorn Research has found the whole thing so entertaining that I’ve almost forgotten that the football season has actually finished. This aspect will continue throughout the close season with Saturn opposite FIFA’s Sun but will carry on through next season as well. So anyone who gets bored by Jose Mourinho’s Chelsea parking the bus again next year can turn to the front pages to follow the trail of lorry loads of FIFA’s fivers instead.