Andy Warhol was an American artist who was called the Pope of pop art. His work was very popular and controversial and explores the relationship between artistic expression and celebrity culture. He once said “I love Los Angeles. I love Hollywood. They’re so beautiful. Everything’s plastic, but I love plastic. I want to be plastic.”

His view of the importance of the ordinary can be summed up by his observation about Coke. ” What’s great about this country is that America started the tradition where the richest consumers buy essentially the same things as the poorest. You can be watching TV and see Coca-Cola, and you know that the President drinks Coca-Cola, Liz Taylor drinks Coca-Cola, and just think, you can drink Coca-Cola, too. A Coke is a Coke and no amount of money can get you a better Coke than the one the bum on the corner is drinking. All the Cokes are the same and all the Cokes are good. Liz Taylor knows it, the President knows it, the bum knows it, and you know it.”

A common view was that “Warhol had captured something irresistible about the zeitgeist of American culture.” He would often refuse to explain his work, suggesting that all one needs to know is “already there ‘on the surface.'” His superficiality and commerciality has been called “the most brilliant mirror of our times,”.

In many ways his view of the world could be summed up by his much quoted expression –  “In the future, everyone will be world-famous for 15 minutes”.

All this leads to the question ‘ What is Fame anyway ? ‘ and perhaps also ‘ If everyone should get 15 minutes, why did Andy Warhol have so much of it  ? ‘. The first part is complex and well beyond the scope of this article, the answer to the second is simple. 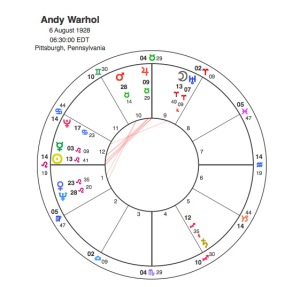 There is one sign that is indisputably born to lead and to live life on centre stage and that is Leo. The Sun is dignified and completely comfortable in its own sign and much of the evidence for this comes from the simple fact that it goes through Leo at the peak of summer, when the weather is warmest and everyone is on holiday, enjoying life. Each year we all get a month off from our tedious travails and concerns to indulge the Universe’s permission to just be, to sunbathe all day and party all night.

On some level a person born with the Sun in Leo feels as if they have been given a whole life on holiday. The course of their actual life may throw up all kinds of problems and obstacles restricting their actual pursuit of this dream but there is something about the Leo personality that believes it to be their birthright. It is the sign of Kings and there is a view that they should be given recognition of their noble status without recourse to any particular effort on their part.

To say that Andy Warhol was a typical Leo would be a massive understatement. Warhol had the Sun, Mercury, Venus, Neptune and the Ascendant in Leo. Moreover his Sun was exactly conjunct the Ascendant, a position that whatever sign its in, always results in a powerful and effortless expression of the personality.

The Ascendant is all about image and presentation, the Sun is essence. With the Sun bang on the Ascendant, nothing is held back, what you see is what you get.

Leos are often referred to as being artistic, but this is tied up with the idea of divine birthright, so anything that they create would naturally have to be considered as art. In Warhol’s case the planet most associated with artistic expression, Venus is also in Leo demanding expression in the 1st house but it is also conjunct Neptune. Neptune is the planet of spiritual inspiration, it lifts creativity to another level and literally brings illumination to artistic endeavour.

Any artist would die for Venus conjunct Neptune in Leo in the 1st house, hoping that they get it next time round. The only downside to Neptune in this context is that it can equally be said to be delusional and that it’s apparent assistance from the beyond the veil is a simple hallucination. But alongside all that 1st house Leo, such misgivings would be dismissed as irrelevant.

On top of all of this, Warhol’s Sun and Ascendant is square to Jupiter at the very top of the chart conjunct the Midheaven. This is an aspect that would drive someone to great success, to literally reach the top of their chosen profession. It is also an indicator of great egotism and pride, of a tendency to overdo everything with an unshakeable belief in one’s own omnipotence.

The only chart with similar tendencies that springs to mind is that of French emperor Napoleon Bonaparte.

Napoleon also has the Sun in Leo in square to Jupiter between the 1st and 10th houses, although they are the other way round. Napoleon’s messianic complex and desire for world domination probably come from the fact that his Sun is at the apex of a powerful T square and its aided by a strongly ambitious Capricorn Moon.

The fact that Andy Warhol does not seem to display such a level of egotism or even claim any particularly special abilities of his own, given this kind of chart, is quite something in itself. Perhaps the power of the effortless Leo ability to attract acclaim and recognition was such a naturally expected gift that he never felt the need to make special claims of his own status.

Warhol’s Moon is also in a Fire sign, Aries in conjunction with Uranus, a placing which makes him defy convention in a strongly assertive fashion. This is an original, eccentric and anarchistic combination which creates things exceptionally quickly as if speed of action was as important as actual quality.

Aries is the first sign of the Zodiac which starts at the Spring Equinox. It is a sign that is bursting with the energy of new life in the Spring and it has to get out there quickly to express all this. With the Moon conjunct Uranus in Aries, it doesn’t really matter what is actually done, all that is needed is action and movement and the more controversial the better.

This Moon / Uranus conjunction is in square to Pluto so the impact of Warhol’s behaviour and creations would be explosive and incendiary. Warhol’s place in art history was to blow away the very conceptions of what art is, a true revolutionary.

In many ways Warhol would not really be bothered by the responses to his work, just as long as intense reactions were provoked and anyway he would have been straight on to the next piece.

Warhol’s output in so many creative areas was phenomenal. His art encompassed many forms of media, including hand drawing, painting, printmaking, photography, silk screening, sculpture, film, and music. He was a pioneer in computer-generated art.

He was a highly prolific filmmaker. Between 1963 and 1968, he made more than 60 films, one of his most famous films, Sleep, monitors poet John Giorno sleeping for six hours. The 35-minute film Blow Job is one continuous shot of the face of DeVeren Bookwalter supposedly receiving oral sex.  Another, Empire consists of eight hours of footage of the Empire State Building in New York City at dusk. The film Eat consists of a man eating a mushroom for 45 minutes.

His work displayed a casual approach to image making, in which chance plays a role and mistakes and imperfections are tolerated. His view was –  “When you do something exactly wrong, you always turn up something.”

Andy Warhol was also notable as a gay man who lived openly as such in times when it was not nearly as easy as it is now. When interviewed in 1980, he indicated that he was still a virgin although this assertion would seem to be contradicted by an incident recounted by one biographer, his hospital treatment for condylomata, a sexually transmitted disease. Warhol’s homosexuality certainly influenced his work and shaped his relationship to the art world and many of his creations draw from gay underground culture and openly explore the complexity of sexuality and desire.

In many ways a chart like Warhol’s is so out there, that it doesn’t really need transits to stimulate important events in his life. It is interesting, however to look at the two Pluto transits to his Sun / Ascendant / Jupiter grouping as they bookend his experience.

Pluto was conjunct his Sun and Ascendant in 1947 – 49, when after graduating from high school, his intentions were to study art education in the hope of becoming an art teacher, but his plans changed and he enrolled to study commercial art. In 1949, he moved to New York City and began a career in magazine illustration and advertising.

Pluto’s second transit opposite Jupiter and square to his Sun and Ascendant began in 1987. Warhol died in February 1987. According to news reports, he had been making good recovery from a routine gallbladder surgery before dying in his sleep from a sudden post-operative cardiac arrhythmia. Prior to his diagnosis and operation, Warhol delayed having his recurring gallbladder problems checked, as he was afraid to enter hospitals and see doctors. His family sued the hospital for inadequate care, saying that the arrhythmia was caused by improper care and water intoxication. The malpractice case was quickly settled out of court.

His death was sudden, unexpected and controversial, very much like his life.

“In the future, everyone will be world-famous for 15 minutes”, unless of course you have a stellium in Leo including the Sun exactly on the Ascendant and in square to Jupiter at the Midheaven. Pluto would make an exception in that case and give you 40 years.