This is because astrology works in a specific way for individuals. It’s not possible to do it on mass.

At the end of June, Mars moves into Aries and stays in the sign until December. This does not mean that everyone with the Sun in that sign would be super assertive and feisty for the whole period.

This would only apply for a much shorter period when it is within a degree or so of their Sun.

Even then the actual effect of this would entirely depend on the natal house position and aspects of that Sun.

But this would be impossible for a newspaper to cover. To do it any kind of justice would mean that the whole paper would consist entirely of astrology.

All serious astrologers know this. The only reason for anyone to write a newspaper column is for reasons of finance or exposure.

Even on the odd occasion in history when the resident astrologer is asked to comment on a specific individual chart, they almost invariably get it wrong, because they are under pressure from the editor to write it in a certain way.

There have probably been more magazine astrology articles written about the marriage of Princess Diana than anyone else in history.

Yet at the time they were all profoundly wrong.

Most of them went overboard about the fact that he was a Scorpio and she was a Cancer, so they were a perfect match.

Most people got to hear that Charles and Diana’s marriage was in trouble in 1992 when the story of his affair with Camilla broke.

Any self respecting astrologer should have known this a decade earlier.

Because the Royal Wedding occurred within 48 hours of an eclipse.

Not only that but it was in the royal sign of Leo.

No one in their right mind would have elected to get married on such a date. The marriage was doomed to fail.

I was living in Brixton that summer just a mile away from the epicentre of the riots that were happening at the time.

I can clearly remember the morning of the wedding. Although the eclipse didn’t happen until two days later, the skies became so dark and thunderous it seemed that the cosmic powers were not impressed.

Yet all the media Astros were wetting themselves about such a joyous occasion.

But even if they didn’t get this one right, they should have done a year later.

William was born on an eclipse in Cancer in the 7th house. This is as clear an indication as possible that his parents’ marriage would not last.

Yet all the media Astros of the time were saying the Sun / Moon conjunction in Cancer meant that William was born into a truly loving and secure family, rather than a bunch of dysfunctional nut jobs and parents who barely tolerated each other while they got on with screwing other people.

But it was ever thus with royal astrologers.

Imagine how it must have been for those Astros belonging to the court of Henry V111 having to find him new wives all the time.

If you say anything horrible about the chart of a royal baby, it’s treason.

This didn’t stop me calling the royal family out over the years but then I don’t have a column in Cosmopolitan to protect.

I have to admit that I’m no monarchist. Some people have called me an astrological Marxist.

This is not true. I have no sympathy for any view of the world that excludes astrology.

If pushed to declare my own political / religious position I would say I’m a Taoist sympathiser.

I feel that we should have all grown up to the point where we don’t need those old power structures but the simple fact is, we haven’t.

My fascination with the Windsors is purely astrological.

An interesting fact about people in power is while they think it gives them more freedom, the exact opposite is actually the case.

Their astrological themes become stronger because so many other people’s lives are caught up with them.

Transits affect them more dramatically than ordinary people and they become caricatures of the themes in their own charts.

Don’t believe it ? Well just watch what Neptune does to Donald Trump over the next two years.

Both have Sagittarius rising – 1 in 12

Both have Mars conjunct a malefic planet – 1 in 6

So all in all the odds against this happening by chance are about 2.5 million to 1.

I have covered Diana’s chart in depth in Charles and Diana – Match Made In Heaven and Princess Diana’s Death – Why ?

Pluto made its only transit of her life to that Mars ( a square ) in August 1997 when she died.

There was also an eclipse that occurred 2 days after her death. 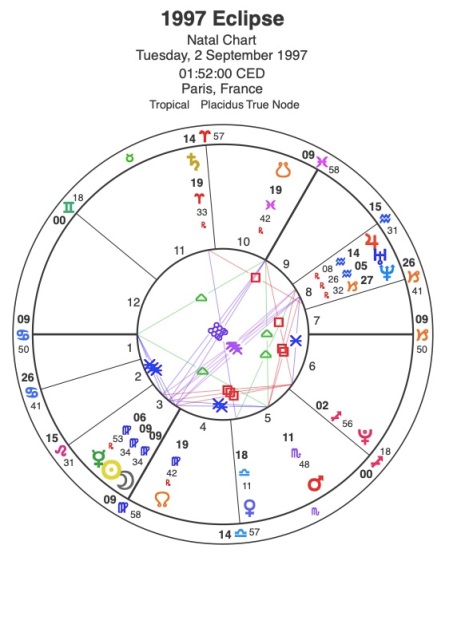 Its interesting to note that the eclipse in Paris occurred with 9.50 Cancer on the Ascendant, exactly the position of Diana’s natal Sun.

The major events in Diana’s life all occurred within 48 hours of eclipses.

William has a Mars / Saturn conjunction. His progressed Mars came to exact conjunction with Saturn in 1997 when Diana died.

The solar eclipse of July this year will occur exactly on William’s Sun.

Eclipses have a 19 year term, at the end of this they return to the same degree. This is called the Saros cycle which sounds like the time we should all go on a nice holiday in the Greek Islands.

Since William was born on an eclipse you would expect him to be powerfully affected by this coming one.

I’m not sure about that. My feeling is that eclipses act as a trigger for the energy of underlying slower planets transits at the time.

Donald Trump was powerfully impacted by the recent lunar eclipse. He was born on a lunar eclipse and this one fell close to his natal degrees.

But my view of this was that the eclipse was unleashing and focusing the Neptune transit that is affecting Trump over the next couple of years.

William has no significant transits going on at the moment.

He also had none during his first Saros cycle Return in 2001 and as far as I can make out, nothing of particular significance happened to him at the time.

So can an eclipse work on its own ?

Does it have a singular significant energy or is it a lightning rod for other transits ?

Well we will see. Keep an eye on Prince William over the next couple of weeks.

Perhaps it will all come through his relationship with Kate, because believe it or not the Duchess of Cambridge was also born on an eclipse. 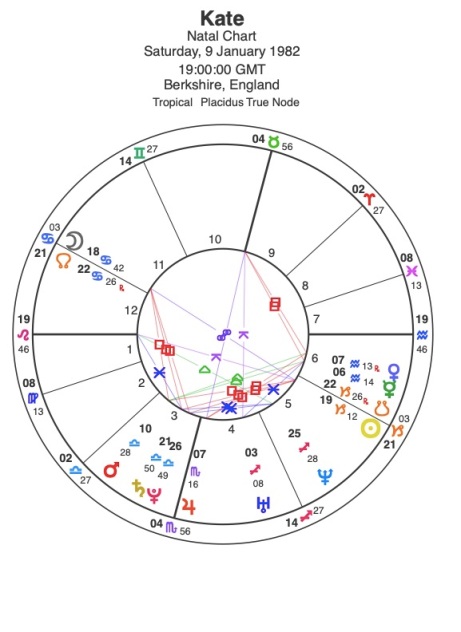 Kate has a very difficult chart. Her eclipse Sun / Moon creates a T Square with an apex Saturn / Pluto conjunction.

Both Saturn and Pluto were conjunct her Sun over the last year or two. I suspected something awful was going to happen.

I believe William had an affair with a neighbour and friend of Kate while she was pregnant. This came to light during Kate’s Pluto transit but it did not fit with the media’s version of how things should be so therefore wasn’t reported.

For this affair to come out on top of Prince Andrew’s alleged pedophilia would be too much for the royal establishment to handle, particularly given that the Queen and Philip can’t have much longer to go.

For more info on this see – Don’t Kiss Me Kate

Kate had her own Saros eclipse return in January this year along with the Saturn / Pluto conjunction square to her apex Saturn.

Nothing obvious happened for Kate then, unless you count her media deification in opposition to the demonic portrayal of her sister in law Meghan.

My own feeling is that the big fallout between William and his brother was because Harry found out about the affair.

Eclipses are supposed to be all about hidden things being forced to the surface.

So what will happen on the solstice ?

If it comes out that William’s been a naughty boy then you read it here first.

If it doesn’t, we have to assume that the Murdoch media and their so called astrologers are stronger than the Saros cycle.