About a month ago there were a number of articles in the press reporting research that had been done which showed that the season during which an individual was born appeared to influence adult temperament.

Of course it goes without saying that these findings could not have anything to do with the fact that the winter months include Capricorn, the most melancholic and depressive of all the Zodiac signs.

It takes one to know one of course and having the Sun, Moon and Ascendant in the sign allows this writer to agree that Capricorns are far less likely to be irritable largely because we don’t have what most other people call temperaments anyway.

Any sane or even simply unbiased person would automatically recognise that this research gives some support to an astrological effect.

But the publication of this data was followed by all the newspapers being inundated with articles stating confidently that these findings could not possibly have anything whatsoever to do with astrology, mainly because they were done by people wearing white coats rather than tall pointed purple hats.

The Daily Telegraph were as dismissive as any of them but thought they would add a few examples of their own.

” The Duchess of Cambridge was born in winter, on January 9, which according to the study, means she is less likely to be irritable while Roy Keane, the famously hot-headed former Manchester United footballer, was born in August, when the scientists say people are more likely to have mood swings. ”

Of course the Duchess is a typical Capricorn and this writer is convinced that this fact has contributed to the establishment’s acceptance of her as a future Queen. The experience of her mother in law Diana, an equally typical Cancer with her famous Moon ruled temperament must have meant that Prince William would only have been allowed to date Capricorns anyway.

But naturally the press would have said that William would have been encouraged to go out with someone born in the winter rather than the summer.

As for Roy Keane, we can confidently replace summer birthdate with Sun in Leo opposite Mars to explain swings of mood and boot.

The Telegraph article continued in the same helpful vein with..

” Mary Berry, the ever-cheerful presenter of the Great British Bake Off, was born in the Spring, when, according to the study, people are more likely to be excessively positive. ”

They obviously forgot to point out that Mary Berry is an Aries whose utterly bizarre reinvention in her mid 70s as a TV superstar came with Pluto and Uranus aspecting her Sun in 2010 – 11 at the start of Bake Off.

The research was done by Dr Xenia Gonda and her findings for a group of 366 students produced ” p ” figures of between 0.0345 and 0.0003. Given that the magic figure is 0.01 and anything below this means that the findings are  statistically significant, Dr Gonda must have been quite proud of her discoveries.

Capricorn Research has consistently turned out projects that score way beyond these kind of figures and has published many articles under the heading ” Does this Prove Astrology “. I’m sorely tempted to dismiss the Hungarians as mere amateurs but recognise that this comes largely from jealousy of the fact that they are obviously getting paid handsomely for their work.

I have also sent my findings to the Daily Telegraph and many other newspapers but for some reason or other they do not find their way into print.

Perhaps if I disguise my results as some kind of seasonal affective disorder rather than proof of an astrological effect, I might get more of a chance to appear on the TV.

Well Capricorns are nothing if not pragmatists so here goes.

In a study of 994 cases that comprise of a group of 288 Sex Symbols and 706 Playboy Centerfold models, Capricorn Research has found that these sexy ladies ( there are a few men in there as well – not the Playboy ones obviously ) are far more likely to be born in the Autumn than any other season.

This emphasis on Autumn is probably down to the fact that Autumn born children start school older than their classmates and this obviously gives them the confidence in their own sexiness which would inevitably lead to them taking their kit off in mens magazines 15 years later.

Impressed ? Well probably not that much, its an ok p figure but some way short of the 0.01 ideal.

But of course thats because we are restricted by foolish non existent notions of a general seasonal affect rather than a proper astrological study of the matter. Its also because we are thinking that the much sought after quality of sexiness is a question of the Sun’s position during the year.

Anyone flicking through an astrology textbook for the first time would confidently see the error of this approach. Sex is a matter for Venus and Mars so we should look there.

So what would be the results if we look at the Venus and Mars distribution through the seasonal signs.

If we take Spring to be Pisces, Aries and Taurus the Venus distribution is

If we look more closely at it and break it down into signs rather than seasons, by far the strongest placing is Venus in Scorpio with 122. This is 147 % of the expected figure and the distribution produces a p figure of 0.0000194.

But both Summer and Autumn score highly here. The sign breakdown is very revealing. The highest scoring signs are Mars in Leo and Virgo each with 108 closely followed by Libra with 106.

Its also very interesting that the highest scoring aspects for this sample are the Venus / Jupiter conjunction with 152 % of the expected figure and the Mars sextile Jupiter with 158 %.

Also scoring quite highly is the glamorous Venus / Neptune conjunction with 134 %.

So where are we with all of this ? There does seem to be a tendency for attractive and sexy women to be born more frequently in the Autumn than in the other seasons.

Its true that the Virgo placings of Venus and Mars would surprise a few people but this sign are known for being perfectionists, so these planets there would could result in their owners being amongst the most photogenic.

So what would the Daily Telegraph make of this article ? If I dropped the astrological references they would probably publish it, perhaps with the helpful example of Brigitte Bardot who was born in the Autumn. 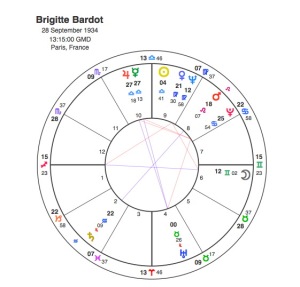 As it turns out, Bardot has the Sun in Libra, Venus in Virgo and Mars in Libra. She also has Venus conjunct Neptune and if your generous with orbs Mars sextile Jupiter.

But they won’t mention that.