Venus in Astrology is the symbol of attraction, it rules both the ability to attract things and people but also how attractive the person is to others.  Mars is the symbol of action, ruling the drive and assertiveness of the person and their competitive nature. The sign placing of both planets would be a significant factor in the charts of public figures.

The Capricorn Astrology Research Project using a sample of 20,641 Public Figures has shown the sign distribution of Venus and Mars to be as follows 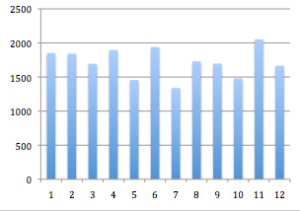 or the chance of this distribution ocurring by chance is

Venus appearing frequently in Aquarius would fit well with astrological thinking. This placing confers an openminded friendliness together with the capacity to attract people from all sorts of different backgrounds and also a person who feels comfortable with modern media.

Venus  lowest score is in Libra.  Libra is, more than any other, the sign of marriage and one to one relationships and Venus here would indicate someone who would naturally channel their capacity for attraction towards a single mate. Venus in Aquarius would feel less comfortable in one to one relationships and would need the freedom to relate to many people in a less personal way. Public figures are more likely to focus their attraction on a wider audience hence the extremely high score for Venus in Aquarius.

Mars in Leo gives strong vitality and stamina.  People with this position are natural leaders and they have a strong need to create something of great significance in their lives.  Power would be an important motivator and they have a natural authority and the ability to go where they want to in life.  They have an innate ability to lead and inspire their followers to support their goals.

Mars scores low in Aries, which is interesting in that it is a strong assertive placing but there is always the suggestion of a tendency to burnout, to be constantly changing direction and to lack the staying power that success in many fields require.  Mars also scores low in Pisces and is generally seen as a weaker placing as it tends to disperse personal drive and energy whilst also finding it difficult to concentrate on the same goals consistently.

Venus and Mars in Astrology are opposite principles, that of attraction and assertion.  Aquarius and Leo are opposite signs so there’s a symbolic neatness there.  Its also interesting that while the Venus in Aquarius / Mars in Leo scores are clearly the highest, the reverse polarity of Venus in Leo and Mars in Aquarius is amongst the lowest.

Venus in Aquarius and Mars in Leo gives the capacity to attract people and support from many different sources together with the tremendous drive to achieve something of lasting substance in life. Of all the 24 possible placings of Venus and Mars, these are the two that most astrologers would expect to score highest in research into public figures and the fact that they are so clearly the leading signs with such a strong Chi Square rating is further proof of a link between the planets and human behaviour.