Most of the people I was close to were angered by the result. Maybe that is because I was living in a suburb of Newcastle, a city with strong Labor traditions, or maybe it was because my friends are just normal, intelligent people.

During the post-mortem the general consensus was that it was all Queensland’s fault and that Australia would be better off letting that state float off into the Pacific.

As an outsider, I found all this rather intriguing and was keen to learn more.

The government is formed of a coalition between the Liberal and National parties.

Readers unfamiliar with Australian politics would need to know that Liberal does not mean liberal, unless it’s in the context of being “ more liberal than Genghis Khan “.

As for the charmingly named National party – perhaps “ more Nationalist than Adolf Hitler “.

The current House of Representatives has 61 Liberal and 67 Labor but the balance of power is firmly held by the Nationals with 15 seats.

In The UK we do have an equivalent to the National party, it’s called the UK Independence Party ( UKIP ).

Due to issues around Brexit in recent years UKIP has gained a considerable following and has even gained the most votes in some elections.

Fortunately the British electoral system has meant that this has not been translated into actual seats largely because their appeal is not concentrated into any particular geographical area, unlike Queensland.

But UKIP have had a big impact on the government, pushing the Tories to become a No Deal Brexit party that is more right wing than any since the 2nd World War.

There is one man who personifies UKIP and was their leader for their peak years.

Nigel Farage is a a Sun Aries with the extra emphasis that Mars and Jupiter bring to the sign.

” With the Sun, Mars and Jupiter in Aries, simple answers are Farage’s political stock in trade.

Aries is the first sign and the one that sees things in clear black and white terms. There is a world and they have to get themselves out there as quickly and assertively as possible. It doesn’t really matter what they do or say, the important thing is that they do and say it.

The Sun conjunct Mars in Aries is more than capable of reducing the complexities of political debate to an overarching significance of the single issue. ”

For most Brexit voters, it was about independence from Brussels, about the freedom to run things their own way without being told what to do by a load of foreigners.

These people profess to love their country but what this actually means is that they hate sharing it with anyone else.

The same kind of thinking can be found in supporters of the Australian National Party, but perhaps because of the different geographical and cultural make up of Australia to the UK, these Mars / Aries qualities are likely to be infused with some Cancerian values.

Cancer is a sign that is most comfortable staying at home. It is sensitive and fiercely protective of its past traditions. It has a very tight sense of boundaries. More than any other sign it is likely to view others as either us or them.

It is the very essence of small town.

These qualities are even more prevalent for someone with the Moon in Cancer.

So if you had a Queensland politician with an Aries stellium and the Moon in Cancer you would be expecting a character wearing a cork hat called Bruce who, in the immortal words of Monty Python, is also in charge of the sheep dip.

The Bruce’s Philosopher’s Sketch had 7 rules, 4 of which were ” No Pooftahs ”

But apart from the name, Barnaby Joyce is Nationalist Queensland incarnate.

He has the Sun and Ascendant in Aries together with the authoritarian Saturn rising, a placement shared by fellow xenophobe Pauline Hanson and Margaret Thatcher.

Joyce also has the Moon in Cancer.

For added simplistic worldview effect, his Aries planets are in the Arien 1st house and his Cancer stuff is in the Cancerian 4th.

It’s also useful to note that the rising sign denotes ones appearance.

The colour for Aries is red and Joyce is often called beetroot because of his reddish colouring.

Readers who might be tempted to scoff at this might care to note that Aries ruler Mars is also red and the sign ruled by the Sun, Leo, is yellow. Donald Trump has Mars rising in Leo – hence orange.

Like Farage, Joyce has the Sun in aspect to Mars. However Barnaby has it as an opposition.

Owing to the orbit of Mars relative to the Earth, the Sun / Mars opposition is quite an unusual aspect, but it certainly is a very aggressive and combative one particularly when it is as tight as Joyce’s.

This opposition focuses by T Square onto a planet in Cancer in the 4th house.

Ordinarily this would paint the picture of an archetypal bogan figure who is prone to getting into fights around the sheep dip.

However, the apex planet is Jupiter, so the net effect is that Barnaby Joyce gets propelled by the support of other such figures to become leader of the National Party and the 2nd most powerful man in Australia.

He was born on a sheep farm and spent his twenties doing odd jobs on farms before founding his own Queensland accountancy firm in 1999 with Jupiter transiting conjunct his Sun.

He was elected to the Senate in 2004, his first major post came at the beginning of 2010 as Tony Abbott’s Shadow Finance Minister. This coincided with his first major Uranus transit, the conjunction to his Ascendant.

Barnaby Joyce has always been confrontational and abrasive often saying dumb things just to be different.

He was elected to the House of Representatives in 2013 as Uranus was square to his Moon.

However the main event and the peak period of Joyce’s life came when Uranus entered his T Square in 2016 and he was Leader of the National Party and Deputy Prime Minister.

But it wasn’t just that.

Joyce has the Sun in Aries in the 1st house so Uranus brought a sudden and unexpected promotion in his career.

His Sun is also opposite Mars in Libra in the 7th house so there would be an equally sudden and even more unexpected upheaval in his marriage.

Because when you get such a promotion, you get a bigger staff and if you have an Aries Sun opposite a 7th house Libra Mars its very tempting to stay after work to discuss the Ugandan situation with one of them.

Particularly if they have a Mars / Venus conjunction right on your Sun. 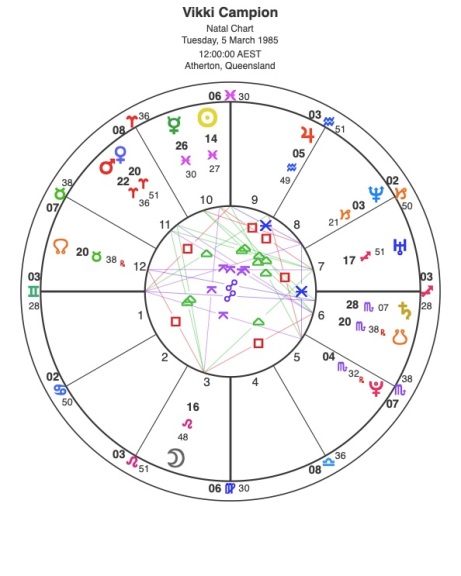 Barnaby Joyce’s new squeeze, Vikki Campion is a Sun Pisces / Moon Leo but with a powerful Mars / Venus conjunction in Aries, she would know how to spot an opening for amorous advancement and have the skills to exploit it.

Also she would be receiving similar Uranian transits to old beetroot face in 2016 – 17 as their relationship took off.

The only problem with Uranus transits is that they can prove to be disruptive too and the bigwigs in the socially conservative Liberal / National coalition were outraged by Joyce’s abandonment of his wife Natalie and four daughters for the Venus / Mars charms of Vikki and when the couple announced a baby was on the way, Barnaby had no choice but to resign during Uranus final hit on his Sun / Mars in February 2018.

Who would have thought that a Catholic who espoused family values and is opposed to abortion and same sex marriages, would so flippantly ditch the old woman for a younger model just as soon as he had clambered high enough up the greasy pole for the magnetism of power to sufficiently offset most of his undesirable personal traits ?

But that’s the thing with these Nationalist types. Just as they love their country, they love the idea of marriage. In fact they love it so much they want to have as much of it as they can. They just don’t like other people having it.

So exit humiliated Ram with tail between legs to the sound of catcalls and derision from both sides of the House.

Does this mean all the drama is over for Barnaby Joyce ?

Unlikely because there is one problem with sacrificing your career to get a bit of red faced nooky with the bleached blonde in the office.

Said blonde might be using you as a stepping stone up the greasy pole herself.

Vikki may have had two children with Barnaby now but ”  I adore my kids, but I also want to challenge myself with more than wiping babies’ faces. And I haven’t worn high heels in two years! ” she said recently as Saturn squared the old man’s Sun and Jupiter was titillating her Mars / Venus.

And next up it’s Pluto, creating a Grand Cross to Barnaby Joyce’s T Square.

So the next couple of years could well see the old ram on ewe duties, changing nappies while her indoors goes back to work and looks for another bloke’s pole to climb onto.