A wonderful thing about astrology is that it’s about symbolic connection. It is not bound by time. It is not a linear, A, B, C kind of science. It is about linkage – a human being, an event or even an idea is linked to the moment of its birth. Astrology helps us to understand the nature of that moment by looking at the patterns created by the planets at the time.

If a similar pattern occurs we can find shared characteristics, even if the people or events themselves are separated by more than a century.

On New Year’s Day our family like many others were eagerly awaiting the new version of Sherlock, but to fill in time we took in an episode of House on Netflix. My son said ‘ you do realise that this is entirely based on Sherlock Holmes ‘ and proceeded to detail the connections.

The names are the obvious thing, not only of Gregory House and Sherlock Holmes but also of their sidekicks, Doctors Watson and Wilson. The characters as well, both House and Holmes are experts with a reputation for genius who take on cases that others would not. They both have remarkable powers of observation and deduction, a tendency to come to rapid conclusions after the briefest examination of the circumstances.

Their eminently superior mental abilities seem to go along with an inability to relate to other people, who they dismiss as inferior beings often with a sarcastic dismissal. There is the suggestion that they are actually sociopaths, or at least entertaining a place somewhere on the autistic spectrum.

Both House and Holmes are regular drug users with the suggestion of addiction.

Even small details are a giveaway. House lives at number 221, flat B and there is an episode where he is shot by a man named Moriarty.

Capricorn Research may well be the last person on the planet to realise these connections, but in my defence most members of my sign are notoriously slow on the uptake, but once they do take hold of something they never let it go. So I decided to look at the astrology of all this.

As ever when one actor is so strongly associated with a particular part, it is likely that their chart will say as much about the character of the role as it will about the person themselves.

People often question this, but again it comes back to astrology being essentially symbolic. Hugh Laurie may be an entirely different character to Gregory House but to the vast majority of TV viewers he symbolises the eminent but irascible physician. His chart simply reflects that.

We don’t have a birth time for Laurie / House but a noon chart says enough. 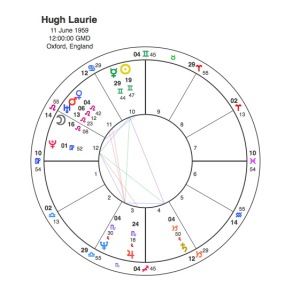 If genius means the ability to hold vast amounts of information and to make deductions from it, then we are probably looking at the Sun and Mercury in Gemini. If we are looking for a character that would insist on being recognise as a genius, then a stellium in Leo including the Moon would be very fitting.

Note that this stellium includes the conjunction of the Moon with Mars and Uranus, which is not only a very dominating and assertive one, but also one which insists on always taking the challenging and unconventional route, deliberately doing things differently to everyone else in order to feel personally stronger and in control.

House’s constant rudeness and sarcasm often gets him into trouble as you would expect of someone with such a strong Mercury opposite Saturn, but he also seems have remarkable regenerative faculties that help get him out of these situations and enable him to continue in the same vein. This must be the Easy Opposition that these two make with Pluto.

But is there any connection between this chart of House / Laurie and that of Sherlock Holmes ?

Many readers would be now thinking that Benedict Cumberbatch is a Sun Cancer, so where is the connection. Like House he does have the Sun in aspect ( square ) to the Moon in a Fire sign ( Aries ) in aspect to Uranus ( opposition ).

Like House, Cumberbatch also has Mercury in sextile to Pluto and in aspect with Saturn ( a conjunction ).

However Gregory House is unlikely to have been modelled on Cumberbatch’s version of Holmes simply because the American TV series predates it by several years.

The three most famous actors to have played the role, each of their portrayals being as popular at the time as that of our current hero Benedict, are Basil Rathbone, Peter Cushing and Christopher Lee.

All three of these stars share the same Sun in Gemini.

Since so many actors have played Holmes, the problem here is in trying to find the seed chart for the detective. We could look at the chart of the first person to play him on stage in Hungary, Karoly Baumann, but this is hardly likely to reveal the person globally linked to the role.

Really the only way we can be sure is to go back to the invention of the character.

Like House, Arthur Conan Doyle had the Sun in Gemini.

Mars is in the same sign as House’s Moon and Doyle’s Sun.

Mercury is obviously the most important planet when dealing with both House and Holmes. It is the Sun ruler of both charts and also Ascendant ruler of Doyle’s ( shame we don’t know Hugh Laurie’s birth time ).

Mercury is again in hard aspect to Saturn, opposition for House, square for Doyle.

Mercury is also in aspect to Pluto, sextile for House, conjunction for Doyle.

There are many interesting synastrial aspects between the two, the most significant being the extremely close conjunction between House’s Sun and Conan Doyle’s Mars and Ascendant. In fact the noon chart shows House’s Sun at the exact same minute as Doyle’s Ascendant.

A year or so ago I wrote an article – Sherlock Holmes and the Strange Case of the Pluto Transits .

As well as detailing the extraordinary connections between the charts of Conan Doyle and the many actors that have played Holmes, it was an examination of the impact of Pluto’s impact on the development of the role.

The first Holmes story, A Study in Scarlet was published in 1886, when Pluto was conjunct Conan Doyle’s Sun.

The first film with Rathbone playing Holmes in the Hound of the Baskervilles came out in 1939 with Pluto opposite Conan Doyle’s Moon.

Peter Cushing’s first Holmes was also with the Hound in 1959, when Pluto was not only square to his own Sun but widely square to Doyle’s as well.

More recently Jeremy Brett played Holmes for 10 years on TV, beginning in 1984 when Pluto was square Doyle’s Moon and ending in 1994 when it was opposite his Sun.

When I first became aware of Gregory House, I like many Brits of a certain vintage was rather surprised by this new twist in the career of Hugh Laurie.

We had all seen him before constantly assuming the quizzical but vacant expressions of upper class dimwits like Bertie Wooster to Stephen Fry’s erudite and highly intelligent servant Jeeves and Prince George to Rowan Atkinson’s scheming Blackadder.

Laurie was a funny straight man but there was no indication that he could hold his own in such a dominant part like Gregory House. So what had happened to him ? The turning point of his life, that’s what.

And of course, Pluto was opposite Arthur Conan Doyle’s Ascendant.

So don’t let anyone tell you a House is not a Holmes.