Elia Dalla Costa was an Italian Cardinal of the Roman Catholic Church. He strongly opposed both Mussolini and communism. During World War II, he became known as “the Cardinal of Charity” for helping save thousands of Italians from execution under the Fascist regime.

Religion is an interesting area for astrology. It is generally said to be ruled by a mixture of planets.

Jupiter is the planet of expanding consciousness, of higher thought, philosophy, understanding. It is principally about exploring the mind and lifting its focus onto higher things.

Neptune is the contemplative, spiritual side of religion. It rules meditation and the search for the non material, to go beyond the realms of our ordinary senses.

But in the sense that religion is also often an authority, a important part of the machinery of state, setting controls and modes of behaviour for its followers, Saturn would also be a feature.

The 9th house is usually the one referred to unless we are talking about monastic seclusion which traditionally would have been found in the 12th house.

Its also possible to consider the 8th house as part of the pattern because personal transformation is an important part of the religious life.

Elia Dalla Costa had all of these boxes ticked. 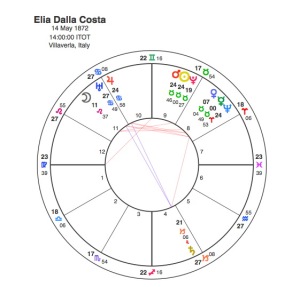 As a Taurus with the Moon in Leo, he would have been a man of strong conviction. His Sun was conjunct Mars and Pluto in the 9th house, showing a deep passion for his life’s work.

But the thing in his chart that really pointed to his vocation was his T Square.

Dalla Costa has Jupiter in the 10th house of career, suggesting that he would reach the very top of his chosen profession. Jupiter was conjunct Uranus indicating someone prepared to take a political stand and as the conjunction was in Cancer, this would suggest a caring attitude to his own flock.

Jupiter and Uranus are opposite Saturn in the 4th suggesting that he would have to make some considerable personal sacrifice to help his own countrymen.

This opposition focuses by T Square onto an apex Neptune in Aries in the 8th house. And its this apex Neptune that shows the depth of his spiritual calling.

This website is a testimony to the power of the Pluto transit. Whenever someone has Pluto conjunct their Sun, the strength of the planets transits intensify.

Pluto only made one transit to this T Square during Dalla Costas lifetime, the conjunction with Jupiter / Uranus in 1933 when he was made a Cardinal.

But of course for those of a religious persuasion death is not an end. The soul continues on its path. In many religions this path includes reincarnation when the soul finds another body and therefore another birth chart.

The Roman Catholic church would have none of this sort of thing. The next step is towards heaven.

Beatification is a recognition accorded by the Catholic Church of a dead person’s entrance into Heaven and therefore their capacity to intercede on behalf of individuals who pray in his or her name. A person who is beatified is given the title “Blessed”.

On 22 December 1981, exactly twently years after his death, Elia Dalla Costa’s process for beatification was opened. In terms of the progression of his soul, this would be a step that has as much importance as attaining the office of Cardinal during his lifetime.

There are some that would say that an astrological chart only has relevance for the life that began at the moment of birth. At death it stops working, it is no longer relevant.

But there are many instances of the symbolism in a chart continuing to impact on the person’s legacy. Transits to the natal chart continue to affect how someone’s life is perceived after their death.

A good example of this is Jimmy Savile, a man whose true crimes and nature only became apparent once Saturn came to conjunct his Sun after he had died. For more information about this read “ Can a planet affect you after your dead “

For Dalla Costa, Pluto only made one contact with his T Square during his life, but it made another 20 years after his death. In December 1981, Pluto was opposite Neptune, square to Jupiter / Uranus and Saturn, creating a Grand Cross.

Beatification is the third of the four steps in the canonisation process. So will Elia Dalla Costa take the next step and become a Saint ?

We might find out soon. Between 2018 and 2023, Pluto makes another contact with the T Square, conjunct Saturn, square Neptune and opposite Jupiter and Uranus.