One bonus that comes from writing scathing astrology articles about celebrities rather than politicians is that you really don’t care what happens to them.

If it’s Donald Trump or Boris Johnson you want to see them drown in their Neptune transits but with Joe Bloggs or Will Smith you just couldn’t give a damn.

The only interesting thing is how on earth such nobodies made it to celebrity superstardom in the first place. And when you see they charts, it all becomes clear. 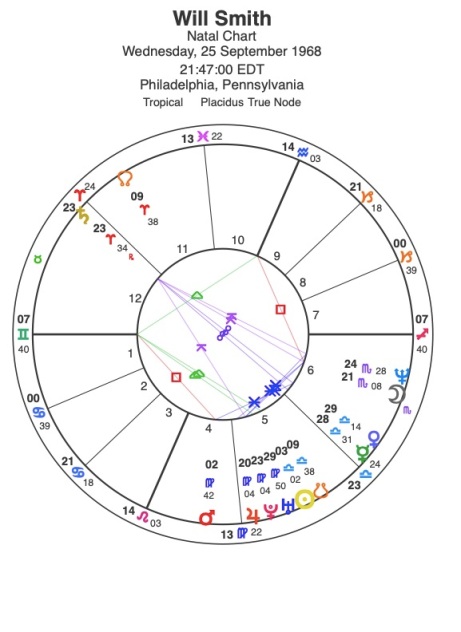 Will Smith has a very particular kind of chart. Everything bar Saturn is contained within a range of 82 degrees and the main focus is on the 5th house of creativity and drama.

A quadruple conjunction of the Sun, Uranus, Pluto and Jupiter is the kind of thing that would propel someone to sudden unexpected fame and fortune.

When you get something like this in a natal chart, the periods when the same planets reproduce an important angular relationship by transit, is when this will actually happen.

Smith had a career as a rap artist / musician but his life radically changed at the end of 1989 when he was handed a script for what turned out to be The Fresh Prince Of Bel Air.

Uranus and Jupiter were square to Smith’s Sun and Pluto was conjunct his Moon. This is the only time in his life when all three would be making major aspects to his lights.

The one challenging aspect in Will Smith’s chart is the opposition between a Mercury Venus conjunction and Saturn. This opposition is being exacerbated by Saturn’s current square to Venus.

So it’s interesting that this has coincided with revelations about his married life. 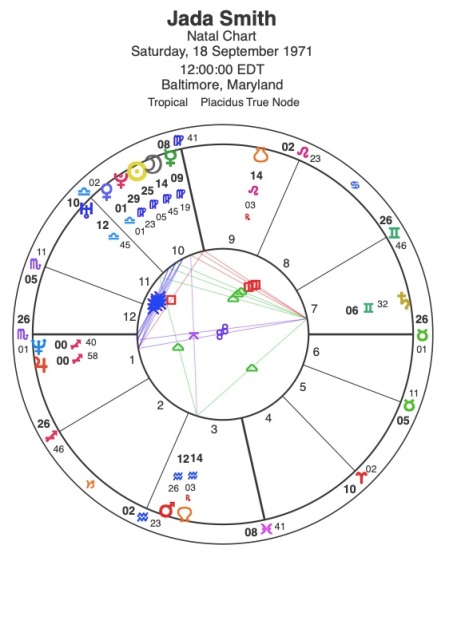 Although born 3 years earlier than Will, Jada Pinkett Smith has a 6 six planet stellium that covers the same degree areas as his.

There are so many contacts that it would take too long to list them all. Perhaps the most stunning is that Jada’s Venus is conjunct Will’s Sun.

But this kind of synastry is unusual in the respect that most couples have charts that are quite different to each other. They have varied connecting aspects, not all conjunctions.

The idea behind this is that opposites attract and we attract someone different to ourselves to give us new qualities to grow with and learn from and become something new, the whole being greater than the parts.

Will and Jada have very similar charts. They would naturally be great friends not least because they would agree on most stuff. But might this also mean they would have to look elsewhere for some things because the magnetism of opposites would be missing ?

‘ ” Will and I have decided to throw away the concept of marriage ” Pinkett Smith shared. ” It’s a life partnership in the sense that we created a foundation together that we know is for this lifetime.”  He agreed saying : ” There’s nothing that could happen that we won’t be together and love each other. ”

So what would a wedding chart look like for this kind of marriage ? 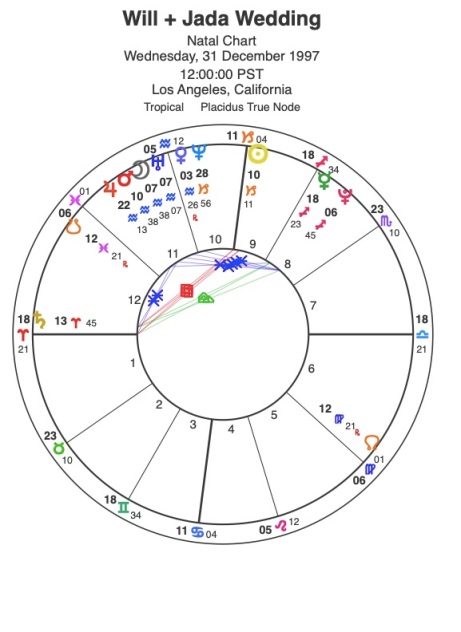 I don’t have a time for their wedding but the chart instantly reveals itself. The Aquarius stellium clearly shows that it is basically about friendship, and coming together because of shared ideals, but since this grouping contains the Moon, Venus and Mars with Uranus that both of them would have freedom to look elsewhere for the actual love action.

This also seems to suggest that the openness is largely Jada’s idea because she has Mars in Aquarius, conjunct the wedding Mars, whereas Will has it in the more restrained Virgo.

And it appears that Jada has been true to form but although she is happy to date someone young enough to be her son, she doesn’t like to move outside her own zodiacal comfort zone.

And don’t let the name fool you – he’s still born in September. 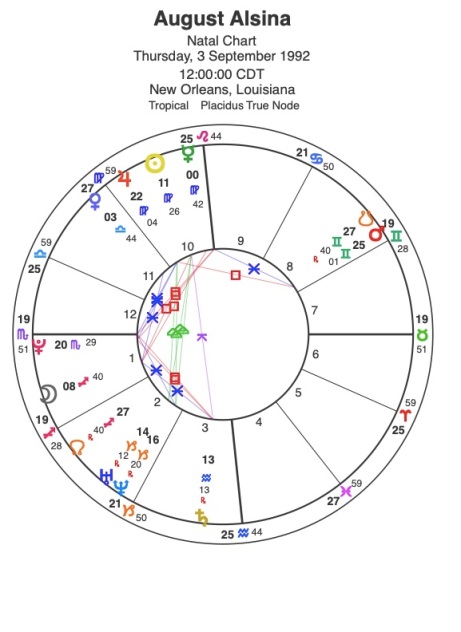 Jada seems to be very sure about what she wants. She likes men with their Jupiter conjunct her Sun ( who wouldn’t ) and with something right on her Venus. In August’s case it is his own Venus.

Because of Jada’s synastry with her husband, August is going to have much the same contacts with Will’s chart.

August’s Jupiter and Venus are in the same place as Will’s so you can be sure that the Fresh Prince has given his backing to this affair.

But of course all these people have an eye on their celebrity status and how any story might affect their followers. They are even worse than politicians and their poll numbers.

Both Will and Jada might emphatically deny August’s assertions, but we can look at the charts and know that they are lying.

And given that Jupiter will next year be heading into Aquarius, hitting all those wedding chart placements, Jada will probably be on the prowl again.

She is obviously up for younger flesh and given that she is inching her way back through the Zodiac, any 16 year old Leos with Jupiter in Virgo who might be up for a bit of granny action in exchange for 15 minutes of fame should get a cab round to Bel Air.