There was a playground rhyme doing the rounds when Capricorn Research was at school which had probably been started during the war. It began ” Hitler has only got one ball “. The second line for some obscure reason was ” The other is in the Albert Hall “. The rest of it went on to deal with other members of the German High Command making uncomplimentary references to their sexual prowess and preferences and also some fairly obscene observations about their relationships with their mothers.

Whilst a birthchart can give away all kinds of information about ones sexual preferences it can’t really show whether someone was testicularly challenged. Of course if Hitler did only have one, it would certainly put a lot of emphasis and pressure on that one.

Adolf Hitler did however, only have one major interplanetary aspect, the square between his Mars / Venus conjunction in Taurus and Saturn in the 10th house. His chart, therefore, should be read in such a way that puts very great emphasis on this one aspect.

Hitler’s chart has been much discussed over the years. Few astrologers have been able to read it in such a way as to do justice to probably the most evil and dangerous individual of the 20th century. In fact in the years running up to the war, many astrologers offered the opinion that Hitler couldn’t be the ogre that people were suggesting because his chart didn’t show it.

Capricorn Research believes this error came about for 3 different reasons one of which was underestimating the importance of the Mars / Saturn square.

Another reason was that Pluto had been discovered only recently and the profound significance of its transits that regular readers of these pages take for granted was understandably unknown in the 1930s.

The last reason is speculative but does make a lot of sense. Hitler’s birthtime is given as 6.30 pm which provides an Ascendant of 27 degrees Libra. Over 30 years of practice has taught Capricorn Research to have a suspicion of stated birthtimes, particularly if they are rounded to an hour or half an hour.  In fact if Adolf Hitler had been born a mere 20 minutes later he would have had Scorpio rising and this would have told a very different tale to Libra.

The Ascendant governs how we are in the world. It is like a window or filter through which we express ourselves. It shows how we perceive others but also how they see us. The intensely passionate fighter that is Scorpio rising fits Hitler far better than the sometimes indecisive, harmonious and peace loving Libra.

The other thing that the Ascendant rules is the physical appearance. The classic Scorpio rising appearance would be short and thick set with dark hair and features generally. Libra rising generally produces fair skin and hair colouring and an average build and height. No doubt with his notion of Arian purity, Adolf Hitler would have very much preferred to have Libra rising.

In fact the Sun in physically strong Taurus with Libra rising looks suspiciously like an advert for the kind of vigorous blonde haired master race that Hitler was trying to promote. The Sun in exact opposition to a Scorpio Ascendant is a different image altogether.

Perhaps this is the point. There have been many references to the Nazi’s use of occultist and astrological symbolism and Hitler had his own astrologers so he was fully aware of the importance of the subject. It really wouldn’t take much to bring his birthtime forward a little to ensure that Libra rising was attributed to him. Maybe this was a deliberately created illusion to fit the desired appearance.

Capricorn Research does not generally go in for rectification of people’s birthtimes but there are exceptions to every rule and Hitler does make a very good case for the beginning of Scorpio rising. 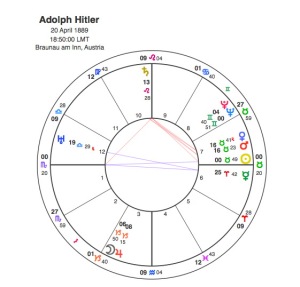 Just a 20 minute adjustment makes the difference between a strong but relatively peaceful demeanour to a classic chart of a political dictator.  It’s not just the change of rising sign, there is also the exact opposition between the Sun and the Ascendant. When a planet is in conjunction with the Ascendant, the energy of that planet has to be expressed strongly, when a planet is opposite the Ascendant the tension from the opposite pulls of both Ascendant and planet is equally powerfully expressed in the life.

Taurus and Scorpio are Fixed signs, probably the two most stubborn and determined of all of them. Oppositions between them can be fiercely fought battles within the psyche of the person and there can be a level of brutality that is disturbing to say the least. The fact that this opposition is so close involving the Sun and the Ascendant makes this a tremendously powerful feature.

Another factor from the time change is that Saturn comes closer to the Midheaven. Saturn is the principle of authority and restraint of convention, suppression and limitation. The Midheaven is the peak of the career. When we also take into account that the Moon is in the politically conservative sign of Capricorn in close conjunction with the powerful and expansive Jupiter the picture of the notorious Nazi dictator becomes clear. This combination of Taurus, Capricorn and Scorpio with Saturn dominating the chart produces a ruthless right wing fanatic determined to control everyone and everything.

There have been many theories put forward by psychologists to explain Hitler’s ruthless crusade. Many of these theories have claimed that a powerful but frustrated sexual energy was the key. It seems that his chart is reinforcing this view.

Mars is the planet of sexual energy and it is closely conjunct its polar opposite Venus in Taurus in the 7th house. On its own this would give a powerful earthy appetite but would not be threatening the whole of Europe. It is however, square to Saturn. Saturn square Mars is like trying to drive a car very fast with the handbrake on. It has a powerfully frustrating effect.

Even so, this is a relatively common aspect shared by many people who manage to handle it without herding others into concentration camps. The trouble is in Hitler’s chart it is the only major interplanetary aspect ( Mercury’s wide opposition to Uranus doesn’t count for so much ) and Saturn is in such an important and dominating position.

All these factors together explain why Adolf Hitler was the man he was and if astrologers of the day had understood the impact of the newcomer Pluto they would have been the first people to run for the air raid shelters.

The turning point and trigger of all this violence came when Pluto changed signs from Cancer to Leo. From the Autumn of 1937 to the Summer of 1942, Pluto made just about the most powerful transit that its possible to make to a chart, the apex of a T Square to an exact opposition between Hitler’s Sun and Ascendant, squaring both of them simultaneously.

The 2nd World War began on 1st September 1939 when Britain and France declared war on Germany. On this date Saturn was at 0 degrees Taurus, exactly conjunct Hitler’s Sun and opposite his Ascendant triggering the enormous power of the Pluto transit. The two most destructive of all the planetary energies came together with explosive effect.

By the end of 1937 war had been inevitable. Hitler had already reoccupied the demilitarised zone in the Rhineland in March 1936, in violation of the Versailles Treaty and had also sent troops to Spain to support General Franco.

Hitler signed the Axis pact with Italy and abandoned his plan of an Anglo-German alliance in 1937. In November of that year he restated his intention of acquiring Lebensraum for the German people and from early 1938 onwards, Hitler was carrying out a foreign policy ultimately aimed at war.

In March 1938, he annexed Austria and then the Sudetenland region of Czechoslovakia.

In September of that year British Prime Minister Neville Chamberlain attended the Munich Agreement, which handed over the Sudetenland districts to Germany. Chamberlain was satisfied with the Munich conference, calling the outcome “peace for our time”, while Hitler was angered about the missed opportunity for war that year. The war came after Hitler’s invasion of Poland in August 1939.

For the first two years of the war the German advance was seemingly unstoppable. Hitler had conquered most of Western Europe and it was only the English Channel that held the advance in check. By the end of Pluto’s transit however, the tide had turned against Hitler.

In June 1941, Hitler made the catastrophic error of opening a war on two fronts by contravening the non-aggression pact of 1939 and attacking the Soviet Union. The invasion conquered a huge area, including the Baltic republics, Belarus, and West Ukraine. But Hitler overreached himself and ordered his troops to halt its advance to Moscow in order to attack Leningrad and Kiev. This decision ultimately caused the failure of the Moscow offensive, which ended disastrously in December.

In late 1942, German forces were defeated in the second battle of El Alamein, thwarting Hitler’s plans to seize the Suez Canal and the Middle East.  In February 1943, Hitler’s repeated refusal to allow their withdrawal at the Battle of Stalingrad led to the total destruction of the 6th Army. The war continued for another two years but Hitler’s troops were basically in retreat from here onwards.

Hitler’s peak therefore coincided with Pluto’s transit to the Sun and Ascendant. If the chart with Libra rising was used the transit would be the same but it would be less intense and spread over a longer period from 1934 just after Hitler came to power until the summer of 1940.

At the end of April 1945, Hitler committed suicide and Germany surrendered, Pluto was conjunct Hitler’s Saturn / Midheaven conjunction at the time indicating the end of his dictatorial ( Saturn ) career ( Midheaven ).

So was Adolf Hitler testicularly challenged ?  We shall never know but with Mars in square to such a powerful Saturn it’s possible. Whatever his personal issues, Pluto’s transit to his Sun and Ascendant made the whole world suffer for them.

19 thoughts on “Adolf Hitler – Only Got One Aspect”