The TV show ” Sex and the City ” is apparently like marmite, either you love it or hate it. Whether that depends on you being a woman or a man, Capricorn Research couldn’t possibly comment. It certainly was a peak in the careers of Sarah Jessica Parker and the other stars of the show, but for the woman who wrote it, Candace Bushell it was a real watershed. 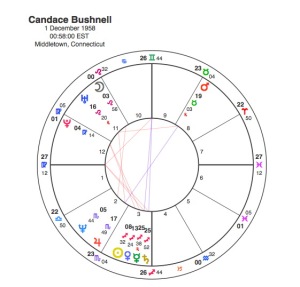 Candace Bushnell was a freelance writer and as such was perfectly represented by having 4 planets in Sagittarius ( freedom ) in the 3rd house ( written communication ).

As Bushnell is so strongly associated with Sex and the City her chart reflects the book and particularly the TV series. It is essentially about confident outgoing women in their 20s and 30s which is reflected in the Moon in Leo. There are 4 characters all living freely and enjoying their independence and each of them is represented by the 4 planets in Sagittarius in Bushnell’s chart.

The Sarah Jessica Parker figure Carrie is the Sun as she is the main star, Kim Catrall’s Samantha is Venus as she is obviously the most sexy one, Cynthia Nixon’s Miranda is the changeable Mercury and Kristin Davis’ Charlotte is the more conventional Saturn.

A T square in any chart will reveal the main themes and Bushnell has one based on Mars in Taurus in the 8th which we can assume stands for sex in opposition to Jupiter which means lots of it. This opposition focuses onto an apex Uranus in the 11th which shows both the close friendships of the characters but also their independence.

For Candace Bushnell herself, Mars and Uranus are in aspect to Jupiter in the 2nd house which brings her a great deal of money for writing about sex and friendships.

Its obvious that Sex in the City was the watershed of Bushnell’s life which is confirmed by the fact that Pluto was conjunct her Sun in 1998 when the TV series began.