As a young child, Capricorn Research had an obsession with the number 4. If I happened to brush against a wall or something similar I had to go back and do it four times, twice on each side.

Capricorns do have a carefully cultivated image, however and I managed to disguise much of this behaviour. But even into my teens it still impacted, particularly around eating biscuits.

If owing to inattention I swallow 5 in any one sitting, I had no choice but to proceed to chomp my way through 16, because 4 times 4 is… And its also quite weird how much inattention I had in those days.

As with any compulsive behaviour the individual feels an acute need to drop it, but anyone who has tried to give up smoking will know that just makes it worse. They continue with the fags but just feel worse about it.

Really we can only give up things if we know the reasons for it in the first place and my discovery of astrology ticked two boxes here.

I learnt that Capricorns are designed to repeat the same patterns ad nauseum, and they are also strongly linked with the Earth number 4.

Nowadays I believe I’ve cracked it, but regular readers of these articles could easily claim that I’ve just picked up a displacement behaviour.

It is a kind of OCD, obsessive chartdrawing disorder.

There are big unanswered questions like what causes black holes and why do Ant and Dec always stand on the same side ?

Most people would be content to allow such questions to float through their mind occasionally but to accept them as ultimately unexplainable. I have to go away and draw charts until I have come up with a satisfactory answer. 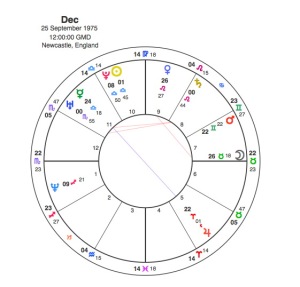 Apparently noone has ever seen Ant or Dec on their own, they come as a pair and a quick look at the synastry shows why.

And for such TV naturals an awful lot of it is tied up with Venus.

They both have Venus / Jupiter aspects, Ant the opposition and Dec the trine.

They also have Venus / Mars aspects, Ant the square and Dec the sextile.

But the truly staggering thing is they both have their Moons conjunct in Venus ruled Taurus.

And when Pluto was conjunct these Moons in 1994, they got their first big breakthrough together presenting in children’s television.

They certainly have mind blowing synastry, but why the left / right order of things ?

Some suggest its alphabetical or that the tallest one stands on the left, but there must be more to it than that. 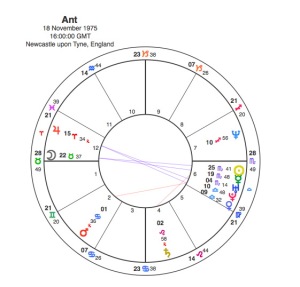 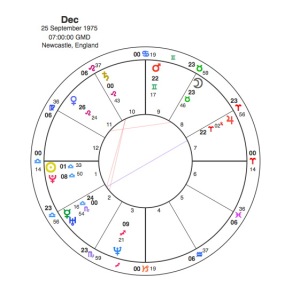 This means that when they stand next to each other in their usual positions, their Suns can hold hands.

It also brings their Moons even closer.

This is all quite amusing and seems to say something but also its a bit forced. It makes me feel like Einstein reluctantly having to add the cosmological constant Lamda into his equations in order for them to fit in with the understanding of the Universe at the time.

Maybe it works, but its a bit inelegant and if Einstein knew anything, he understood that the Universe was always elegant. For more info see Albert Einstein – Everyone’s Favourite Relative

I ask the reader to excuse this outrageous piece of cosmological name dropping because my experience in these kind of situations is just like Uncle Albert. If you sit and wait with a problem for long enough the Universe will provide the solution.

And it just did today with the announcement of the death of much loved comedian, Ronnie Corbett.

Anyone with astrological OCD will always respond to the death of someone famous not by expressing their condolences to family and friends but by getting the ephemeris out.

This is the key to the Ant and Dec conundrum.

Corbett was always on the left for the Two Ronnies, a fact that instantly kicks into touch the theories about tall people and alphabets.

Its a Taurus / Scorpio thing. Like Ant, Ronnie Corbett had the Moon in Taurus opposite an important personal planet in Scorpio, Ronnie Barker had nothing in either sign.

Eric Morecambe ( always on the left ) had the Sun in Taurus opposite Saturn in Scorpio, Ernie Wise had Mars in Scorpio but nothing in Taurus so he had to be on the right.

Peter Cook ( another left side comedian ), just like Corbett had the Moon at 8 Taurus opposite Venus in Scorpio. Dudley Moore’s Moon was at 8  Scorpio so he had to sit opposite Cook.

So there we have it, the answer to this most baffling of ultimate questions.

And the Capricorn motto, ” everything comes to he who waits “. No doubt if I hang around long enough, the Universe will provide the answer to black holes as well and it wouldn’t surprise me if this had something to do with Taurus and Scorpio too.

After all nature does abhor a vacuum, even more than a packet of Hob Nobs with only 3 left.