Joanne Rowling is a British novelist, best known as the author of the Harry Potter fantasy series. The Potter books have gained worldwide attention, won multiple awards, and sold more than 400 million copies. They have become the best-selling book series ever and been the basis for a series of films which has become the highest-grossing film series in history. Everyone knows these facts and there can be very few people alive today who have not seen at least one of the films. But how many people know that JK Rowling was in fact an astrologer ?

On the TV series “Antiques Roadshow” in July 2010 a woman submitted a horoscope in a plastic folder containing 12 typed pages with a hand-drawn coloured image on the front. The natal analysis had been prepared by Rowling who had become friends with the lady. The pair of mothers-to-be had attended childbirth (antenatal) ‘classes’ together. The horoscope was prepared for her son Jack David Buchanan who was born at the same time as Rowling’s daughter Jessica.

This chart was written during the time that Rowling was writing the Harry Potter stories and there can be little doubt that her extensive knowledge of the subject was used in her writing of many of her characters. This will be the subject of a future article but it proves that J K Rowling is the most famous astrologer alive today.

The one thing that many of her fans do know is that she shares a birthday and therefore the same Sun sign, Leo, as the hero of her work, Harry Potter. Rowling’s birthtime is not known but many astrologers have agreed that a time of around 4 am works well. 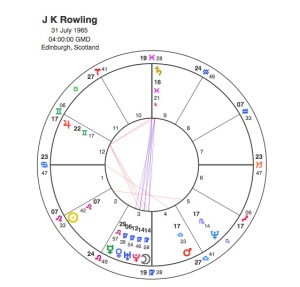 J. K. Rowling has a Leo Sun which in the rectified chart is in the 2nd house. The 2nd is the house of money and she went from being on benefits in a council flat in Edinburgh to become one of the richest women in the world within a few years. Her Sun is in square aspect to Neptune which gives a powerful imagination and is also an important planet in any kind of escapist fantasy but the most striking thing about her chart is the stellium in Virgo, made up of the Moon, Venus, Uranus and Pluto.

The mid sixties were iconic times, a period of social and cultural revolution. This is due to the conjunction of Uranus and Pluto in Virgo at the time. Many people born with this conjunction linked to other major planets in the chart have been gifted with a particular kind of intuitive skill which in some cases borders on genius. With the Moon in close conjunction with both of them Joanne Rowling had these gifts. The rectified chart places her Virgo stellium in the 3rd house of writing and communication.

The Moon in Virgo creates a perfectionist and always gives a powerful grasp of complicated detail. This would be needed to hold together the multilayered plots of the 7 Potter novels. The Moon is also opposite Saturn which points to the enormous amount of work that went into the writing but also the personal difficulties that she went through at the time. Saturn in difficult aspect to the Moon can often suggest an interruption or loss in the relationship with the mother, and Rowling’s mother suffered with MS for 10 years before she died in 1990 when Jo was 25. In fact 1990 was an important year in Rowling’s life for another reason as well, she was on a train when the idea for Harry Potter came to her.  Jupiter was in Leo and almost certainly conjunct her Sun at the time. Saturn was opposite her rectified Cancer Ascendant in December 1990 when her mother died. In many ways the two events were linked as Rowling herself has admitted that the suffering she went through after her mother’s death contributed to her ability to feel and express the darker moments experienced by Harry Potter.

The opposition between the Moon / Uranus / Pluto conjunction and Saturn projects by T Square onto an apex Jupiter in Gemini. Jupiter is the principle of expansion and an apex Jupiter will invariably catapult someone to the very top in their chosen area. Gemini is the sign of writing and communication so this T Square takes the instinctive genius of the Virgo stellium with the suffering and application of Saturn and converts it into global domination of children’ s literature through Jupiter in Gemini.

The most important transits of her life however would be when Pluto came to make its square aspects to the Virgo stellium particularly to the Moon.

The first book, Harry Potter and the Philosopher’s Stone was published in 1997 when Pluto was square her Venus. It was the years 2000 and 2001 when the Potter phenomenon went global. The fourth book, Harry Potter and the Goblet of Fire, was released simultaneously in the UK and the US in July 2000 and broke sales records in both countries. In the US, the book sold three million copies in its first 48 hours, smashing all literary sales records. Rowling was named Author of the Year in the 2000 British Book Awards. The first film, Harry Potter and the Philosopher’s Stone came out in 2001.

In 2000 – 2001 Pluto created was square to Rowlings Moon / Pluto / Uranus conjunction and also square to Saturn, undoubtedly the most powerful transit if her life.

J K Rowling was an astrologer who wrote the best selling book series of all time. The characters in these books were astrological archetypes and her choice of birthdates for them was almost certainly derived from her astrological knowledge and inserted into the stories deliberately.