Astrological resonance is an extraordinary thing. Any one placing can refer to many different things that all occur within its symbolic range.

If someone had a Moon / Saturn conjunction in Pisces at the Midheaven and I said that he was an abbott, plenty of astrologers would nod sagely.

Pisces has a strong connection with contemplative religion.

A Moon / Saturn conjunction would fit with someone who has withdrawn from the world but also done so in a conventional, serious manner.

This conjunction at the Midheaven is likely to show someone who has risen to the top of that particular order, so an abbott fits very nicely. 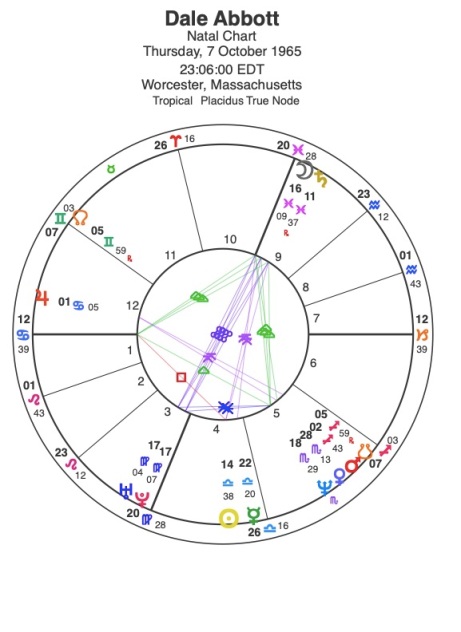 I have written hundreds of articles over the years and my method for choosing subjects is to simply allow my mind to wander until it finds an appropriate one.

This method is tried and trusted and runs along horary principles that show that the timing of thoughts has an astrological resonance of its own.

Having covered politics very strongly in recent weeks and with sport still mostly disrupted, I thought I would turn to my other favourite topic – the astrology of murder.

The idea came to my head to look at the relationship between a murderer and his victim(s).

So I turned to my research database that contains the timed charts of 545 murderers and the very first one in the file was that of Dale Abbott.

My experience when dealing with murderers and other criminals is not to be fooled by the Sun, Moon and Ascendant signs.

After all if faced with a Sun Libra, Moon Pisces, Cancer Rising, our first thoughts don’t turn in that direction.

These three may give us a good guide to basic character but as to directions that a life might take its the planetary aspects that hold the clue, particularly if they are really close ones.

So the very least we could expect would be an explosive and totally unexpected event that would occur in his life that was probably driven by deep subconscious patterns.

So who Dale Abbott murder ?

The answer is clear from the chart.

Abbott’s ruler is his Moon. It is conjunct Saturn. Saturn is the ruler of his 7th house.

He murdered his wife.

What would be the method of murder ? The Moon / Saturn conjunction is in Pisces.

Where did the murder take place ? Uranus and Pluto are in the 3rd house.

At his brother’s house.

Jennifer, with the Sun and Mercury in Pisces in square to a Jupiter / Neptune conjunction in the 9th could also be placed in a monastery.

The woman’s Sun conjunct the man’s Moon is the chief one that points to soulmate status.

This is also reinforced by the fact that Jennifer’s Moon was opposite Dale’s Sun and exactly opposite his Mercury.

However soulmate doesn’t necessarily mean the Disney happy ever after variety.

What this kind of connection did was to pull Jennifer into Dale’s themes and make her his victim.

The murder occurred in 1997 with Pluto conjunct Dale’s Mars.

When there is a natal aspect pattern involving Pluto, it will only make one major transit to the same pattern in a person’s lifetime.

This happened in 2003 when Pluto was square to the Moon and its own position. Dale Abbott was charged with murder but plead guilty to manslaughter and received an 8 – 10 year sentence on September 28th 2003.

Saturn was also conjunct his Ascendant at the time.

Maybe there is a market for a game of Astrology Cluedo where you are given a series of charts and have to guess which one committed the murder.

This one could have been Abbott Pink in his brother’s conservatory with the poison.