Astrology is like any other subject, it can be understood at many different levels. The only problem is that its critics don’t see that, they take kindergarten entry level stuff to be the sum total of its capacity.

No-one would dismiss Maths because some 5 year old struggles with the 4 times table, or German because Capricorn Research can only manage to say Danke Schone and Auf Wiedersehn.

But Astrology is roundly dismissed as nonsense because ” how can there be only 12 different types of personality or experience ? ”

Sun sign astrology is what it is – nursery school stuff. The only problem is that it is mostly followed by adults. And as teachers it is our job to move them along a bit, not keep them stuck on their times tables.

But all that seems to happen is people repeating the same old 12 sign stuff. Particularly when it comes to careers.

If you have the Sun in Aries you’re either in the military or a sportsman.

On that level of understanding this guy would have to be an undertaker. 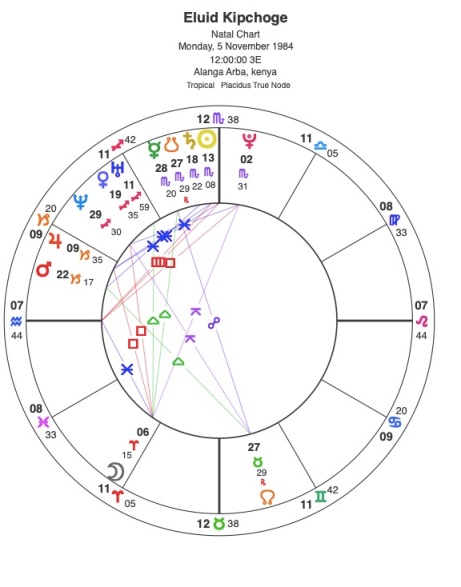 Eluid Kipchoge has just become the first human to run a marathon in under two hours. This is an absolutely phenomenal achievement even if it is being poo poohed by some people saying he had 41 pacemakers and some special shoes. That’s like criticising Neil Armstrong for using a spaceship.

Marathon running is unlike most other sports in that it is entirely about endurance.

Aries is going to be useful and having the Moon there gives an instinctive competitive nature but what you really need is someone in it for the long term.

Scorpio can dig deeper into reserves than any other sign and the Sun’s conjunction with Saturn along with Mars in Capricorn gives the staying power needed.

But the Sun conjunct Saturn ? Surely that means your special trainers would trip over one of the pacemakers and lose you the record ?

When playing the long game, the Sun / Saturn conjunction is a better bet than the Sun / Jupiter one.

In fact a matter of days after Kipchoge’s record, the Women’s marathon World record which had been held for 16 years was smashed. 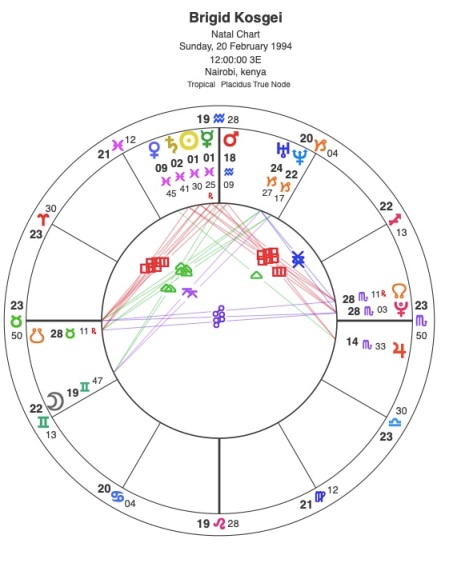 Yet another Kenyan runner, Brigid Kosgei also has a close Sun / Saturn conjunction, in Pisces.

Not only that, the previous holder of the record, England’s Paula Radcliffe also had a Sun / Saturn aspect. 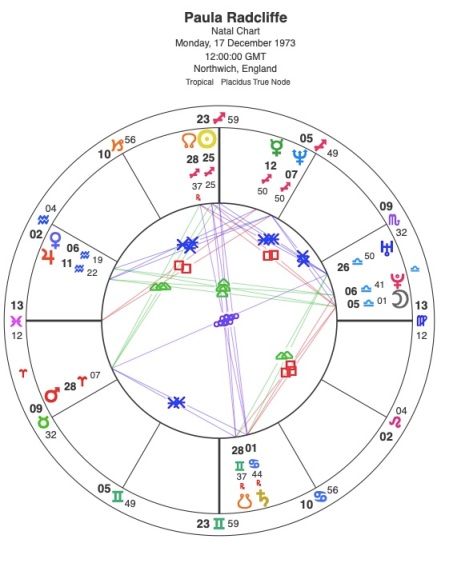 Even the Sun opposite Saturn is no impediment to marathon running, a fact proved by Radcliffe as she took the World Record when Saturn returned to its natal place.

Adding to this the fact that Mary Keitany, the World record holder for a Women Only event has the Sun in Capricorn in square to Saturn.

But from now on the name that people will remember is that of Kipchoge. To break the 2 hour mark is a phenomenal achievement.

The man himself has said that it places him in the same category as Roger Bannister who was the first to break the 4 minute mile.

Intriguingly, although the distance is much shorter than a marathon, Saturn doesn’t seem to be a problem here either. 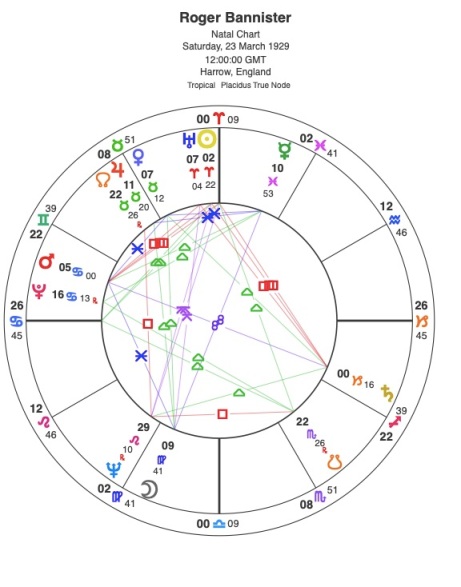 Bannister had Saturn in square to the Sun and opposite Mars. In fact this was part of a T Square to an apex Sun in Aries.

So perhaps the shorter distance requires both the explosive burst of Mars and the endurance of Saturn.

But when it comes to transits for these kind of breakthroughs, the planet that turns up is the one we would expect.

The 4 minute mile was broken when Jupiter appeared in Roger Bannister’s T Square.

So Jupiter bings home the goodies, but without Saturn prominent in their charts none of these guys would get there in the end. They wouldn’t have got there at all