Many astrological devotees have entertained themselves by trying to pick the perfect birth chart. Some may even have fantasised that this ideal might be their own in a future incarnation.

Picking the perfect chart however, is not as easy as it seems. You have to obey astronomical rules so you can’t have the Sun in Leo, Mercury in Aquarius and Venus in Taurus. We would all like to have a Grand Trine and to try and shoehorn in as many planets in dignity as possible.

Its a bit like picking a football fantasy league team for next season with a limited budget where you might be tempted to splurge most of your cash on Lionel Messi up front but also have to settle for Sunderland’s reserve left back. We go for Venus conjunct Jupiter rising, but what to do with Saturn, unaspected in the 3rd house ?

If we are going to do it properly we should only be allowed to pick a chart that can be conceivably formed within the next 50 years or so in order for it to become the basis of our next time round.

All this provides an interesting diversion but ignores the much larger questions like do any of us actually get another chance ? If so, do we all get one, or do we have to earn it ? Or do we keep on coming back ad infinitum as a kind of endless punishment ?

Some say we unconsciously choose our next incarnation anyway based on our thoughts, words and deeds in this one like some kind of celestial credit / debit column. Others believe that it is our unfulfilled urges, desires and patterns that propel us back for another time round to hopefully find release in the future.

What about those very few special beings who get to deliberately choose their own incarnation ? What would they choose and why ?  Its probably fair to say that they would use different criterion to the rest of us.

It is difficult enough to get any kind of agreement on who these beings might be but the ones most of us would acknowledge were probably born so long ago as to not have reliable birth times anyway.

There have been many articles over the years about the birth chart of Jesus Christ including one that argued that he must have had all the planets in signs of their dignity because he was the son of God. This seems a remarkably superficial way of looking at it. Its quite clear that Jesus chose an incarnation that would bring along a fair amount of suffering and difficulty, not least one that would guarantee him a prolonged and agonising death in his early thirties.

We all have our take on Jesus chart and Capricorn Research’s tuppence worth can be seen here.

There may be many beings living today who have consciously chosen their own incarnation but the one most of us would accept is the Dalai Lama.

There are similarities between the charts of these two beings, the Grand Trine in Water with one of the lights rising in Cancer but also the difficult opposition to Saturn.

Interestingly some of these similarities apply to the chart of one of the more colourful characters to have claimed status as an enlightened being in recent times, Bhagwan Shree Rajneesh. 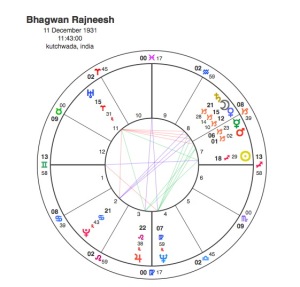 Rajneesh was an Indian mystic and controversial spiritual teacher who attracted a large following of western devotees in the 1970s and was dubbed the ” sex guru “. He emphasised the importance of meditation, awareness, love, celebration, courage, creativity and humour, qualities which he viewed as suppressed by adherence to static belief systems, religious tradition and socialisation. Rajneesh’s teachings have had a notable impact on Western spirituality, as well as New Age thought.

Rajneesh also has a Grand Trine but this one is in Fire signs and with the Sun in Sagittarius he was always prepared to be direct and forthright in his view of religion. This Grand Trine including Jupiter and Uranus might conceivably be found on the cosmic fantasy lists of astrologers as it certainly points to having a lot of fun.

The chart also contains a T Square with the Moon conjunct Saturn in Capricorn in the 8th house opposite Pluto focusing onto an apex Uranus. This points to the possibility of sudden and instant enlightenment, through atomic change and the jettisoning of old outmoded thoughts and beliefs. The whole chart is as dynamic as his unusual mediation techniques.

Rajneesh said he became spiritually enlightened on 21 March 1953, at age 21, in a mystical experience while sitting under a tree. It was claimed that he should have become enlightened in his previous life at the age of 108, but died 21 days before and so had to wait one year for each of those days.

This claim gains significant astrological support from the fact that Pluto was in his Grand Trine conjunct Jupiter in 1953, but even more significantly, Uranus the apex planet and Grand Trine member made a conjunction to Pluto and an opposition to the 8th house Moon at the exact time the event occurred.

Rajneesh’s chart does paint a clear picture of his incarnation, even down to the 90 odd Rolls Royces that he was said to own and the hostility he attracted particularly towards the end when he was deported from the USA due to crimes committed by his followers in the ashram in Oregon.

Whether or not Rajneesh could be placed in the same company as the other ‘ masters ‘ would depend on the beliefs of the person making the choice, but most people would agree that he was a one off and not a typical mystic.

Most astrologers view of the chart of a typical mystic would inevitably contain a strongly devotional Pisces / Neptune flavour and a perfect example would be Sri Chaitanya Mahaprabhu who is revered by devotees as an incarnation of Krishna.

Chaitanya was born at the time of a lunar eclipse with the Sun in Pisces and the Moon in Virgo. This is an extremely powerful astrological configuration but is all tied up with the power of humility, devotion and self surrender.

Pisces is the last sign of the Zodiac and in many ways the challenge for someone born in this sign is the most difficult of all. It is simply to let go of one’s sense of an individual self and of all the experience that has been accumulated. The separate individual wave is being asked to become once again part of the ocean, to lose itself in the greater whole.

The symbol for Pisces is that of the two fishes swimming in opposite directions, one towards the end of the cycle and the end of self, the other back towards Aquarius and the other signs. Its as if this awareness of the need to disperse the self is accompanied by an equal need to hang onto the self and everything that has been experienced before. It is these two opposite fish that cause much of the confusion for the sign.

Occasionally, there are Pisceans who are able and willing to follow the one fish into the void. Lord Chaitanya was a supreme example.

Both Pisces and Virgo are signs that will devote themselves to helping and serving others, they are the least egotistical of all the signs.

The lunar eclipse opposition forms part of a T Square with an apex conjunction of Saturn and Neptune. Saturn here represents austerity, discipline and the denial of self. Neptune, the ruler of Pisces is the sphere of the intangible, it is the desire to penetrate into the unknown, to lose oneself in a higher consciousness.

So why would the Lord Krishna choose such an incarnation ? To quote from Krishna.com ..

” Lord Chaitanya appears in the guise of a devotee, we should not foolishly think He is an ordinary human being…. Sometimes the Supreme Personality of Godhead Himself wonders how much transcendental pleasure is within Himself, and in order to taste His own potency, He sometimes takes the position of tasting Himself. Lord Chaitanya is Krishna Himself, but He appears as a devotee to taste the sweetness of the transcendental mellow in Himself which is tasted by Srimati Radharani, the greatest of all devotees ”

” Lord Chaitanya did not invent a system of religion, as people sometimes assume. Religious systems are meant to show the existence of God, who is then generally approached as the cosmic order-supplier. But Lord Sri Chaitanya Mahaprabhu’s transcendental mission is to distribute love of Godhead to everyone. Anyone who accepts God as the Supreme can take to the process of chanting Hare Krishna and become a lover of God. Therefore Lord Chaitanya is the most magnanimous. This munificent broadcasting of devotional service is possible only for Krishna Himself. Therefore Lord Chaitanya is Krishna. ”

It seems that Sri Chaitanya’s calling became most insistent during Pluto’s transit to his T Square in square to both Sun and Moon between 1505 and 1510, culminating in its conjunction with the apex Neptune in his 24th year when

” He declared that party feeling and sectarianism were the two great enemies of progress, and as long as He should continue to be an inhabitant of Nadia belonging to a certain family, His mission would not meet with complete success. He then resolved to be a citizen of the world by cutting off His connection with a particular family, caste and creed and with this resolution He embraced the position of a Sannyasi at Katoa under the guidance of Keshav Bharati of that town, on that 24th year of His age. His mother and wife wept bitterly for His separation, but our Hero though soft in heart, was a strong Person in principle He left His little world in His house for the unlimited spiritual world of Krishna with mankind in general. “

It’s a fair bet that of all the astrologers idly casting horoscopes for their next incarnation, none of them would pick an eclipsed Moon in Virgo with an apex Saturn / Neptune conjunction, but that probably says more about us than anything.

Lord Krishna chose the incarnation of Sri Chaitanya carefully to pick an individuality that was designed to lose itself in the devotional love of the whole and to show the way for others to become a lover of God. The perfect astrological expression of this would be lunar eclipse from Pisces to Virgo with a T Square apex to Saturn and Neptune.

It also perhaps helps to explain why the shaven haired, orange clad, Hare Krishna chanting devotees of today look so strange to most of us in these material times. An apex Neptune would probably be needed to understand them.

Contemplation of past or future lives is an interesting pursuit that can either help us deal with or distract us from the challenges of the present one.

When it comes to it, Capricorn Research is quite content to take what the Universe offers should there be a next time round. Just so long as the chance to study the astrological rules is presented again.