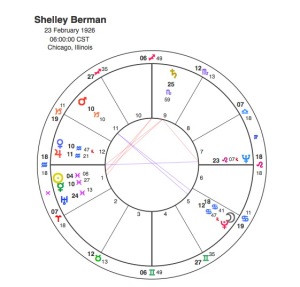 Shelley Berman was an American comedian. He had the Sun in Pisces and Aquarius rising. Capricorn research has a collection of 328 comedians​ and Aquarius and Pisces are the most frequent Sun / Ascendant combinations.

The difficult part of his chart is the role of the Moon. The Moon has a rulership over youth and childhood. It is in Cancer the sign of the family and in the 5th house of children. It is conjunct Pluto and opposite Mars which shows a sudden major upheaval which due to the difficult aspect to Mars would inevitably be extremely painful.

In the mid-1960s, Berman and wife Sarah adopted two children, son Joshua and daughter Rachel. The Bermans were planning Joshua’s bar mitzvah when he was diagnosed with a brain tumor. Joshua died in 1977, age 12.

Usually when Pluto makes an aspect to a planet in the birth chart, the energy will be seriously triggered when it makes its next major aspect to the same planet by transit. Pluto’s next aspect would be when it came to square the Moon and Mars in 1977. At the time Pluto was in the 8th house, traditionally associated with death.

The death of a child is every parent’s worst possible nightmare, the fact that it was indicated by Pluto conjunct the Moon in Cancer in the 5th house in Shelley Berman’s chart would not have helped him to deal with this tragedy but it may help other people who wonder why life can be so starkly unfair.