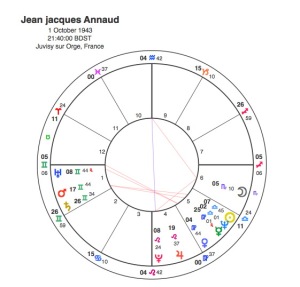 Both men have the Sun conjunct Neptune in Libra in a very similar area of the chart. Annaud has the Sun at the tail end of the 5th house and Beineix has his at the beginning of the 6th house. In some astrological house systems they would both be in the 5th house. The 5th house is traditionally the house of acting so Sun conjunct Neptune in an artistic sign like Libra in the 5th would be a natural placing for film directors. They both have the Moon in Water signs, Annaud in Scorpio, Beineix in Pisces giving great sensitivity and emotional depth to their filmmaking. They also both have the same sextile ( 60 degree ) aspect to our friend Pluto. If you thought there might be a similarity in the development of their careers, you would be right.

They both received much acclaim for their film directing debuts, Annaud won an Oscar for Best Foreign Language Film in 1976 for his first film, Black and White in Colour and Beineix won first prize at the Trouville Festival for his first film, Le Chien de M. Michel, in 1977.  Both breakthroughs were arranged by Pluto which was conjunct Annaud’s Sun in 1975 – 6 and Beineix’s in 1977 – 8.

1986 was a major year for both of them, Annaud made his best known film to date, the Name of the Rose and Beineix made the film that everyone associates him with, Betty Blue, which was Oscar nominated in 1987. Pluto was conjunct Annaud’s Moon and Beineix’s Mars for these films.

Annaud’s best known film was Seven Years in Tibet which starred Brad Pitt and was made in 1997 when Pluto was opposite his Ascendant. Since then he has continued to make films but has not reached the same size of audience again.  Beineix made another acclaimed film, Roselyne et les lions, in 1989 when Pluto was opposite his Ascendant but since then has only made 2 feature films having become disenchanted with the global film industry and concentrated on documentaries.