For the last 18 months Capricorn Research has experienced a Pluto / Moon enforced sabbatical from astrological writing. In the real world not much has changed. Donald Trump is just as much of a disaster as everyone predicted and we are still arguing about Brexit.

In the football world, however, everything moves at such a pace, that even a few weeks without an article leaves the writer with much to catch up on, hence the barrage of pieces penned since the New Year.

Today’s footie news that Mike Ashley has ended the talks for the take over of Newcastle United by Amanda Staveley  has prompted all kinds of speculation about the immediate future of the club, not least that of manager Rafa Benitez.

Benitez’ odds of being the next manager to leave his post have dropped drastically from 10 / 1 to 2 / 1 overnight, leaving Capricorn Research mortified at not having looked at the charts of all involved in time to make a quick killing at William Hills.

In fact I realised that I have never written an article about any of the players in this drama, so as a penance that has to be redeemed immediately starting with 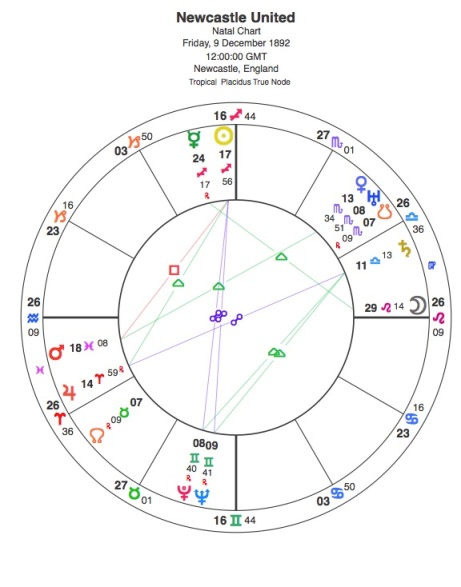 In any chart relating to football the two most important points are the Sun and Mars. In Newcastle’s chart these two are in exact square aspect at 18 degrees of Sagittarius and Pisces respectively.

A difficult Sun / Mars aspect always points to battles to be fought often between different parts of oneself as well as against rivals. So its likely that tensions will frequently emerge at Newcastle particularly when the area around 17 – 18 degrees of the Mutable signs are triggered.

There are many ways of looking at how successful a club will be at any given period in its history. Transits to the inauguration chart work well as do those in the chart of the manager.

But one frequently overlooked method is to do a simple synastry between the chart of the club and its owner. Sometimes this is very auspicious and stunningly simple as in the close conjunction between the Suns ( in mid Pisces ) of Real Madrid and owner Florentino Perez.

There are other synastries that are equally simple but as troublesome as they come. 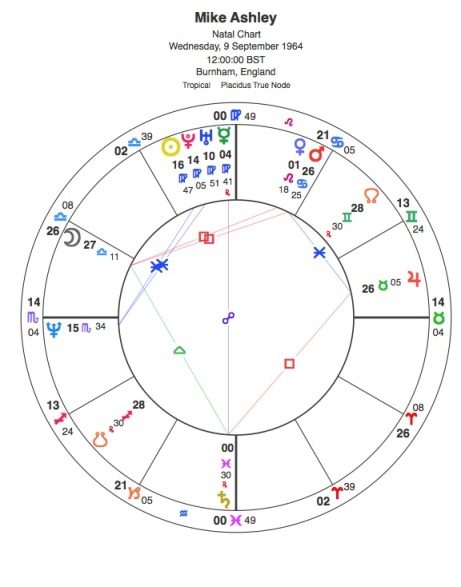 Mike Ashley’s Sun at 17 Virgo is closely square to the Newcastle Sun and opposite to its Mars.

Ashley is one of those Virgoans born in the mid 60s with the Sun together with the powerful Uranus / Pluto conjunction, bringing a maverick streak and an intensity and wilfulness not normally associated with the sign.

Its always unfortunate not to have birth times but Capricorn Research’s experience is that the noon chart often makes up for this by painting an accurate picture of the person.

Ashley both looks and acts like he has Scorpio rising with the deceptive Neptune in close conjunction.

That Saturn in Pisces at the base of the chart looks like the perfect symbol for an army of long suffering low paid workers that have held up his business empire.

The astrology of Sports Direct would no doubt make an entertaining article all of its own, but this one is about Ashley at Newcastle. 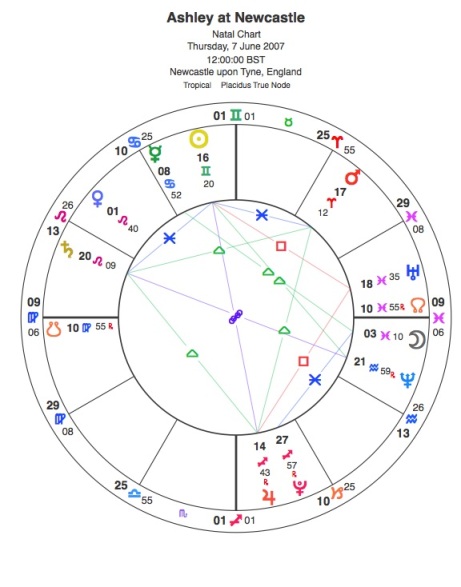 The chart for Ashley’s takeover at Newcastle contains a powerful T Square between the Sun and Jupiter with an apex Uranus. At 15 – 18 degrees of Mutable signs, it triggers the sensitive degrees in both the Ashley and Newcastle charts.

The Sun in Gemini opposite Jupiter in Sagittarius will always indicate a lot of noise being created but the T Square to Uranus points to wilfulness, disruption and chaos.

Its true that the Jupiter of this chart is conjunct the Newcastle Sun indicating a large personality and money coming in but the aspects as a whole are extremely tense.

Everything about these three charts suggests a fight without end which will bring little success to Newcastle.

The club’s fans have been generally hostile to Ashley since soon after the takeover, owing to his failure to put in the funds required and his turning the hallowed St James’ Park into a larger than life advert for Sports Direct. After years of just about surviving in the Premier League, Newcastle were inevitably relegated. 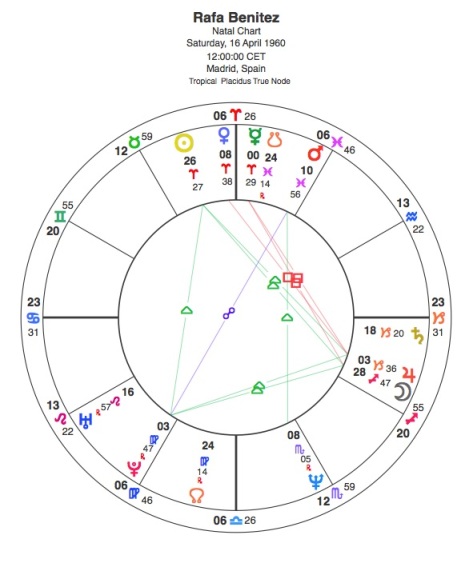 The failures of such characters as Alan Pardew, John Carver and Steve McLaren led to Rafa Benitez being installed as manager towards the end of the 2015 – 16 season, but too late to save Newcastle from going down. To everyone’s surprise Benitez stayed around to slum it in the Championship and brought them straight back up at the first attempt.

Benitez, however, believed that sufficient funds would be provided to buy the players needed to help Newcastle stay up. With Ashley trying to sell the club, the money has clearly not been forthcoming.

Ashley and Benitez were always going to end up fighting each other, a simple look at their own synastry makes that clear.

Ashley’s Sun is in opposition to Benitez Mars.

Bearing in mind the exact Sun / Mars square in the Newcastle chart, it was only a matter of time before these two men squared up to each other.

Uranus plays a dominant role in Ashley’s chart and in the chart of his Newcastle take over, it only makes sense that it would be the prime mover in any scrap.

Uranus is currently at 25 Aries and just about to hit Benitez’ Sun and Ashley’s Mars. February and March will be critical for both of them.

Neptune will also be opposite Mike Ashley’s Sun from April this year until the early part of 2020, so we could see much of his empire crumbling. No doubt there will be many people, not just Newcastle fans looking forward to it.