I can truthfully say that reading one book completely and totally changed my life. It occurred about 40 years ago whilst Pluto was square my Sun, although I didn’t know that at the time.

The book in question was Alan Oken’s As Above, So Below.

I had never thought about astrology before, never even read a horoscope column, but by the time I’d finished it, I was an addict.

Its true that most first experiences of anything are likely to be the most powerful, but I still believe that it is the best introductory text on the subject.

As Above, So Below set this particular goat on the beginning of the mountain path and I have never looked back since. Reading it was the most confirming experience, as it explained why I was like I was in a way that nothing had before.

I wasn’t that bothered that Capricorn was easily the most uncool sign of the lot, but the exceptional way that Oken painted my picture fitting it in with the yearly cycle of nature allowed me to feel that not only was I meant to be uncool, but the Universe absolutely needed me to be utterly uncool, and it would not be able to function without it.

The acknowledgement of this was the most profound turning point in my life.

Any life changing experience however is likely to require the understanding and acceptance of things that we might rather prefer not to.

Naturally I went straight out and bought the 2nd book of the Oken trilogy, The Horoscope, The Road and its Travellers. This is where I learnt to draw my own chart and then I had to face the fact that I had not only the Sun but the Moon and Ascendant in Capricorn with both lights in the 12th house.

This book, which I call HRT for short, contains more condensed astrological wonders than anything else I’ve read since and it ends with 7 example charts of famous people who travelled the road.

6 of these 7 are heroic and extremely cool in their own fields, they are representing Leo – psychologist and mystic, Carl Jung ; Gemini – Artist and Dancer, Isadora Duncan who was so cool that she even had a cool way of dying ; Aquarius – Revolutionary Activist, Angela Davis ; Aries – escapologist Harry Houdini ; Virgo – actress Greta Garbo and Pisces – sleeping mystic Edgar Cayce.

The 7th was a Capricorn. The one figure from the whole of history that my hero, Alan Oken, chose to accurately represent the Capricorn psyche was one of the most ruthless men who ever lived, Soviet dictator Joseph Stalin. 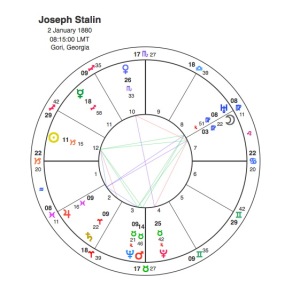 Not only that Stalin had Capricorn rising and the Sun in the 12th house. He also had Venus in Scorpio in opposition to Pluto. And the character analysis that followed made it all very clear that these astrological placings meant that not only was Joseph Stalin the biggest bastard who ever lived, he was also capable of hiding his true intentions from everyone due to his 12th house Sun and Scorpio Venus.

Operating under this kind of astrological cover enabled him to rise to the very top before anyone had actually realised it despite the fact that he was bumping off his rivals left, right and centre.

The discovery of this chart was pretty unsettling for me as I also had Venus in Scorpio in the 10th house in hard aspect to Pluto ( square ).

The group of friends that I had at the time were all equally fascinated by the Oken trilogy, but they had started to look at me in a much more guarded fashion. Perhaps they were waiting for me to march them off in chains at any moment.

On one level I was horrified at the discovery of my astrological twin, on the other I started to question why I was not an all powerful dictator who could snap his fingers and have everyone in the room instantly transported to a labour camp.

I put it down to my not having Uncle Joe’s Grand Trine in Earth and Jupiter in the 1st house.

I decided to try and focus my energies on the extremely close T Square in my chart between the Ascendant / Chiron – Jupiter / Uranus apex Neptune in the 9th house and go for astrological and spiritual evolution. I would also try and hide any Stalinist tendencies in my 12th house.

Thirty five years later, interestingly under the influence of the only other Pluto transit to my Sun of my life, I was working my way through the astrodatabank, copying and analysing every chart on there for my Capricorn Research Project.

This process took the best part of 3 years and covered over 25,000 charts. It was an incredible experience witnessing so much astrological wonder, but as I was coming near to the end of it I got a real shock.

Working through the letter S, I came to Joseph Stalin 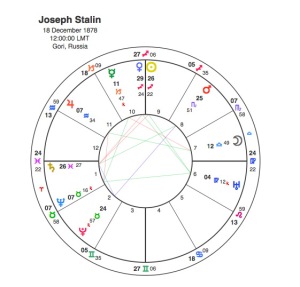 You can imagine my surprise to see the Sun in Sagittarius rather than Capricorn.

But even the year is different, and instead of Venus being in Scorpio opposite Pluto, its Mars.

Now its fair to say that there is some dispute about Stalin’s birthdate and the Astrodatabank’s Lois Rodden gives it a firm DD ( dirty data ).

According to their Stalin page.

“A year ago I saw a TV documentary in English on Stalin that briefly showed his birth register as the commentator said the date was December 6, 1878 OS. Stalin had put December 9 on his forged passport when he acted as a spy infiltrating Bolshevik circles.”

Part of the problem comes from the change of the Julian calendar to the Gregorian one.

The Gregorian calendar was introduced in 1582 and quickly adopted by most of the European powers. Russia did not make this change until 1918, so its calendar was always 12 days out of step with our own.

But even with the 12 day adjustment, either of these dates still give a Sagittarius Sun.

“Stalin later invented much about his life: his official birthday was 21 December 1879, over a year later, an invented date. He generally stuck to 6 December 1878 until an interview in 1920 with a Swedish newspaper. In 1925, he ordered his secretary Tovstukha to formalize (sic) the 1879 date. There are several explanations, including his desire to re-create himself. Most likely, he moved the date later to avoid conscription.”

This was the date that Oken picked up and added 12 days to putting the Sun at 11 degrees Capricorn. I’m not sure where he got the birth time of 8.15 am but the Astrotheme website conveniently adds this time to the Sagittarius chart.

The noon chart works pretty well as it gives Saturn conjunct the Ascendant which worked for that other dictator Margaret Thatcher. However it still gives him Pisces rising, which doesn’t really fit.

I am prepared to accept the 8.15 chart, not least because Stalin does look a bit like a Capricorn rising.

And an extremely tight Sun / Saturn square covers some of the other issues.

The Sun is still in the 12th house, a very handy placing for any politician who does not want people to see his true convictions until its too late, a placing that suited Tony Blair very well.

And when it comes to it, Stalin’s ruthless culling of opponents fits much more with Mars in Scorpio opposite Pluto than Venus in that position.

One way of helping to establish which chart works best is looking at the major transits, particularly those of Pluto. The key years in Stalin’s life would be 1922 – 25.

” Lenin appointed Stalin General Secretary in 1922. This post enabled Stalin to appoint many of his allies to government positions.

Lenin suffered strokes in May and December 1922, forcing him into semi-retirement in Gorki. Stalin visited him often, acting as his intermediary with the outside world, but the pair quarreled and their relationship deteriorated.Lenin dictated increasingly disparaging notes on Stalin in what would become his testament. He criticized Stalin’s political views, rude manners, and excessive power and ambition, and suggested that Stalin should be removed from the position of general secretary. During Lenin’s semi-retirement, Stalin forged an alliance with Kamenev and Grigory Zinoviev against Trotsky. These allies prevented Lenin’s Testament from being revealed to the Twelfth Party Congress in April 1923 (after Lenin’s death the testament was read to selected groups of deputies to the Thirteenth Party Congress in May 1924 but it was forbidden to be mentioned at the plenary assemblies or any documents of the Congress ).

Oken’s view that he had the right chart was no doubt strengthened by the fact that Pluto was at 11 Cancer opposite that chart’s Sun from 1922 – 25.

However, in a strange astrological twist, that often happens in these kind of situations, the Sagittarius chart has Pluto in square to the Moon for exactly the same period.

But perhaps the clearest transit is the one in 1953 when he died.

In 1953, Pluto was transitting through the 8th house of the Astrotheme chart, creating a tight T Square with his Mars in Scorpio opposite natal Pluto. That would surely have been enough to kill off 3 powerful dictators.

So the Sun at 26 Sagittarius, it is then, even allowing for Julian and Gregory.

Pluto conjunct my own Sun has finally ridden me of an unwanted association that began when it was in square to the same body. Triple Capricorns have to put up with a lot but being identified with Joseph Stalin for 35 years takes some beating.

This sign is nothing if not stoic, however and we always win in the long term and anyway, noone will ever find where I’ve hidden all the bodies.