Opera began in the 17th century in Italy, no doubt with a large and enthusiastic public following, but for much of its history its been considered an acquired taste and the interest in acquiring it has been limited to a certain privileged class of people. Its association with picnics at Glyndebourne appeared to place it beyond the experience of most people. But for a brief period it caught the imagination of the great unwashed as the BBC transported Luciano Pavarotti’s Nessun Dorma into their living rooms as the signature tune for their 1990 football World Cup coverage.

Whether or not it was tied up with England’s bravura performance in leaving it much later in the tournament before their customary exit on penalties, we were all mightily impressed and many a Joe Average was heard humming along outside the pubs that summer. The culmination of this unlikely marriage of football and high opera was the performance of The Three Tenors,  Plácido Domingo, José Carreras and Pavarotti on the eve of the World Cup Final.

The Three Tenors continued to perform together in vast stadiums throughout the following decade as opera once again became an entertainment for the masses. Inevitably there was some opposition from elitist quarters who felt that opera could not work in such a setting but apart from that it was as if the whole musical genre had caught fire. Which looking at the charts of Carreras, Doimngo and Pavarotti, that’s exactly what had happened. 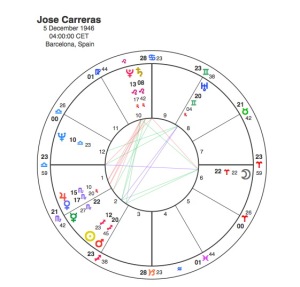 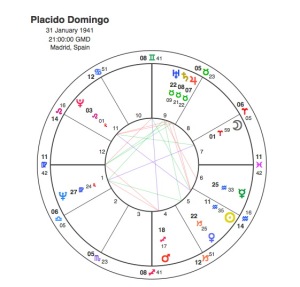 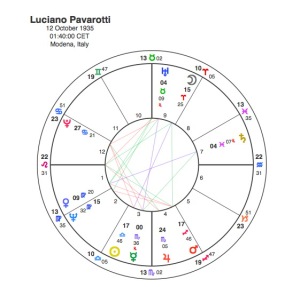 They say that opera is an art that is basically about emotion and passion and the two planets that operate in those fields are the Moon and Mars.

There are some incredible similarities in the charts of the three tenors but the most extraordinary thing is they all have the Moon in Aries and Mars in Sagittarius, both of course are Fire signs. The Mars positions are all in very close conjunction. The chances of this kind of coming together are thousands to one against.

All three have their Suns in harmonious aspect, Pavarotti in Libra, Domingo in Aquarius and Carreras in Sagittarius.

All three have the powerfully auspicious Grand Trine pattern. The Grand Trine is without doubt a gift from the Gods. It is formed of three planets in each of the signs of the same element and so all are performing in a sympathetic and harmonious manner. The effect is very auspicious and means that the individual has an ease of expression that allows their talents to unfold naturally. It also frequently brings favourable material benefits without requiring too much effort on the part of the person.

The aspect is not that common and its extraordinary that these three personalities who have probably earnt more money than anyone in the history of opera all have a Grand Trine.

So what about 1990 when this all came together ? How would the transits converge on this trio ?

Jose Carreras had Pluto conjunct his Venus / Jupiter / Mercury conjunction around his 2nd house cusp, a perfect symbol of a sudden and spectacular transformation ( Pluto ) in his artistic expression ( Venus ) through the use of his voice ( Mercury ) in front of a global audience ( Jupiter ) in a development that would bring him enormous material benefit ( 2nd house ).

Placido Domingo had experienced Pluto square his Sun the previous year and was still coasting on the dramatic boost that this transit had given to his career.

Luciano Pavarotti had Pluto conjunct his Sun between 1977 and 79 when he made his breakthroughs with televised opera appearances  and was profiled in a cover story in the Time magazine.

In 1990 Pavarotti had Neptune, the planet that perhaps most symbolises the Muse in square to both his Sun and Moon.

But perhaps the chart that most captures the flavour of the time with the corporate recognition ( Capricorn ) of the traditional ( Cancer ) musical art form ( Neptune ) is the one for the first performance on the eve of the World Cup Final. The time is uncertain but it has been cast for 10.00 pm due to a recognition that these kind of events in an Italian summer tend to be performed quite late in the evening. 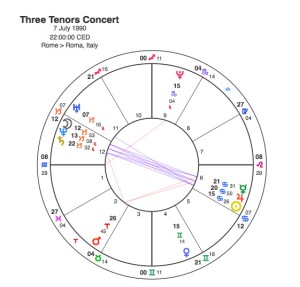 An incredible opposition between 7 planets in Cancer and Capricorn including the Sun and Moon and focusing around Neptune and Jupiter shows the concentration of energy onto expanding the opera form.

The fact that most of this opposition focuses by T square onto a powerfully assertive Mars in Aries in the 2nd house of money shows how much would be generated by this coming together of the Three Tenors.

Carreras, Domingo and Pavarotti took an art form that began in the 17th century and seemed keen to stay there and blasted it into the 21st. This was no mean feat but then they all had the Moon in Aries and Mars  within 3 degrees of each other in Sagittarius so all that rocket propulsion was bound to do something.

The fact that they all had Grand Trines meant that the launch was successful and once again opera was an art form of the masses.