The 8th house is the most difficult one to call for astrologers. It’s said to traditionally rule sex, death and other people’s resources which whilst that may be true is not a lot of help when dealing with a client who has several important planets there.

The 8th sign Scorpio often gets an undeserved bad press and people with this sign or house are often very sensitive about it.

Capricorn Research recently did an article on the Yorkshire Ripper, Peter Sutcliffe, who has an 8th house stellium, and one response received was from someone who also had one, accusing the writer of suggesting everyone with several planets here must be a serial killer.

This is obviously absurd paranoia as Mercury and Venus constant proximity to the Sun means we’re only one planet short of a stellium for a couple of hours ever day. If each serial killer disposed of a dozen targets on average, there’d be no one left alive by that logic.

But how should we treat the 8th house ? The one thing that all 8th house people seem to have is a capacity and even a need to penetrate deeper into the issues that motivate mankind. Either there is a need to react to and act from these deeper levels of the unconscious or there is the desire to explore these reactions in others.

For this reason it is often thought of as the house of depth psychology.

Whatever we say about this house it is clear that the person will not wish to lead a life on a superficial level, they have to explore the depths,

Detective work is often connected to the 8th house because it attempts to penetrate into previously unseen areas and it takes the person into contact with a shady side of life.

TV has an interesting way of identifying particular presenters with the subject matter of the programme.

Just as the charts of actors known for a particular role will often symbolise that role, the charts of presenters will identify the nature of the subject that the programme is about.

Crimewatch is a long-running and high-profile BBC TV programme, watched by between four and five million every month that reconstructs major unsolved crimes inviting viewers to be armchair detectives, in order to gain information from the public which may assist in solving the case.

The show features approximately three or four cases per show, with each case featuring reconstructions of the crime, interviews with senior detectives and relatives or friends.

Viewers are encouraged to contact Crimewatch with phonelines remaining open until midnight. About a third of its cases are solved, half of those as a direct result of viewers’ calls. Its successes have included some of Britain’s most notorious crimes, including the kidnap of Stephanie Slater and murder of Julie Dart, the M25 rapist, the road-rage killing by Kenneth Noye, and the capture of two boys for the abduction and murder of James Bulger.

It is an interesting development in crime detection as it makes a much more assertive direct appeal to the public to clear up cases that the police are in danger of drawing a blank with.

The programmes style is urgent, fast paced and quite in your in face. It seems to have an Arien character to go with the Scorpionic work being done.

Of the many people who have presented Crimewatch in the 30 years since it began, we have two with actual birthtimes.

Sue Cook was one of the pioneers who presented the show for the first 11 years. 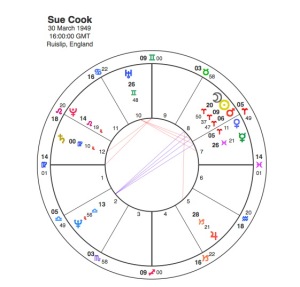 Cook studied psychology at the university which is just as you would expect for someone with the Sun, Moon and Mars in the 8th with Venus on the cusp of the house. All these planets are in Aries, with the Sun and Mars in close conjunction, and they are also opposite Neptune.

Its interesting that the 8th house rules other people’s money. The 2nd also rules money and Neptune is often connected with shady types who operate illegally, particularly when its retrograde.

So Sue Cook is shining a very incisive light ( Sun, Moon, Mars, Venus in Aries ) in her attempts to detect ( 8th house ) on the crimes of burglars ( Neptune retrograde in the 2nd ).

Cook’s Sun is in trine to Pluto and her Moon is square Jupiter.

Her chart could almost stand as the chart for the programme itself.

Pluto’s opposition by transit to the Aries group between 1974 and 81 coincided with her breakthrough.

Her broadcasting career began in 1974 as she was one of the pioneer presenters on Radio Caroline. In 1978 she moved into TV presenting Nationwide.

Pluto was opposite her Moon in 1981 when she married classical guitarist John Williams.

Pluto was square Jupiter in 1984 when she began Crimewatch.

The transiting Jupiter was also square her Sun at the time of the first episode.

Sue Cook’s co presenter was Nick Ross. Unfortunately no birth time is available so we have no way of knowing if he has an 8th house dominance but its interesting to look at the synastry between them anyway. 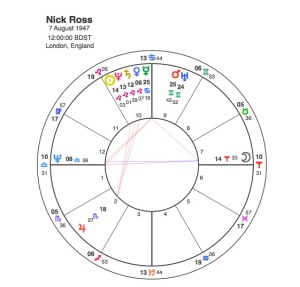 Ross also has an 8th type resonance in his chart because the Sun is closely conjunct Pluto, the ruler of the 8th sign Scorpio.

But perhaps the strongest link is that they both have the Moon in conjunction in mid Aries. They both also have this Moon in opposition to Neptune, so they both pair up to shine this light on criminals.

Its particularly poignant that the Moon rules the public at large and their instincts and feelings and of course the whole point of crime watch was to make a direct ( Aries ) appeal to the public ( Moon ) in order to catch criminals ( Neptune ).

Ross has the Sun in square to Jupiter.

Saturn was square to Ross’ Sun when Crimewatch began.

Ross’ television peak was around the end of the 80s early 90s with Pluto square his Sun when he seemed to be fronting several TV programmes each day.

Ross left Crimewatch in 2007 after 23 years when Pluto was opposite his Mars.

The other presenter who we have a birth time for is Kirsty Young who took over from Ross.

Young has very similar astrological signatures. She has the Sun in the 8th sign Scorpio with the Moon in close conjunction to Pluto and Jupiter.

The Sun and Moon are part of a pattern called the Finger of God with Saturn at 19 degrees Aries ( conjunct both Cook and Ross’s Moon ). Admittedly the Aries part is not as strong as Cook and Ross but then Young was not a pioneer for the programme.

Young’s big breakthrough was in 1992 when she presented the main evening news programme Scotland Today for Scottish Television with Pluto conjunct her Sun.

Jupiter was renewing its relationship with Young’s Moon and Pluto by square aspect in 2007 when she began on Crimewatch. 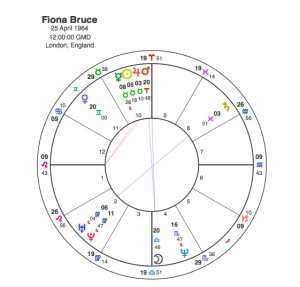 Bruce has similar themes. Although a Taurus, she has the Sun conjunct Jupiter and trine to Pluto. Her Moon is in opposition to a powerful Mars at 20 Aries, which is conjunct both Cook and Ross’s Moons.

Jupiter was conjunct her Mars and opposite the Moon when she joined Crimewatch. 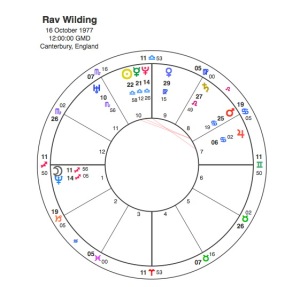 Wilding has the  8th connection through a Sun / Pluto conjunction. He also has the Moon / Neptune relationship through a conjunction.

The Moon / Mars connection is also there as Mars is in the Moon’s sign of Cancer.

Wilding’s turning point was in 2000 when he joined the Metropolitan Police. While based at Peckham he was involved in the high-profile police investigation surrounding the death of Damilola Taylor in November of that year.

If Wilding’s birth time was close to noon, Pluto was conjunct his Moon in 2000.

The transiting Jupiter was square his Moon / Neptune when he joined Crimewatch in 2004.

Again we have the 8th connection through the Sun’s square to Pluto and the Moon is at 18 Aries conjunct that of Cook and Ross.

The Moon is also opposite Mars.

He joined Crimewatch in 2012, when Pluto was conjunct his Venus and square his Mars.

Its extraordinary how often the same themes come up. These are all the presenters that dates are available for, bar one. But in many ways that one should be seen as extremely symbolic because not only did she present Crimewatch for 4 years, she also appeared on the programme as a murder victim. 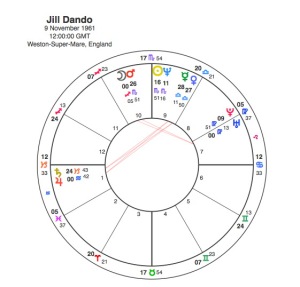 Jill Dando had the 8th connection through the Sun being in Scorpio and the Moon being square to Pluto.

She also had the Sun in conjunction with Neptune.

She also had a Moon / Mars relationship this time by conjunction.

Jill Dando took over Sue Cook’s role in 1995. If she was born at noon, Pluto was transiting conjunct her Moon at the time.

All  Dando’s planets are contained within 150 degrees so there few aspects. Capricorn Research has discovered that when this is the case, the aspects that are there become more important. The chief one is the Moon’s square to Uranus and Pluto.

In April 1999, when Pluto squared its natal position Dando was murdered by gunshot outside her home. Crimewatch reconstructed her murder in an attempt to aid the police in the search for her killer.

Barry George was convicted of Jill Dando’s killing. Owing to the immense popularity of the victim there was exceptional outrage from the public, who were impatient for a conviction. In the absence of other suspects, George attracted police attention because many elements in his background seemed to point to his guilt, although the only actual evidence was a tiny speck of material that may or may not have been gunshot residue. 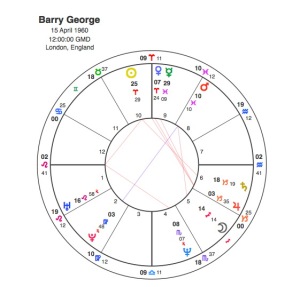 Barry George had a number of previous convictions for assault and a history of stalking. It could be true to say that his chart reflected this through the Mars / Pluto opposition which is often associated with violent behaviour.

The Sun in Aries square Saturn also suggests a dark side and possibly an aggressive nature.

But it does not really look like the chart of a murderer.

George’s Mars is square Dando’s Moon so there is a connection with the most difficult aspect in her chart but they also share a Moon sign which is certainly not the kind of thing that would cause him to kill her.

It was Pluto however that caused George to be arrested. Whenever Pluto is part of a major planetary aspect at birth, the sudden, powerful and dramatic change of fortune and life indicated is likely to occur when Pluto makes its one transit to the planet concerned. So inevitably, Pluto was square to George’s Mars in 1999, when Dando was murdered. It moved on to conjunct the Moon when he was convicted in 2001.

Barry George’s conviction was judged unsafe by the Court of Appeal and was quashed in 2007 as Jupiter came to conjunct his Moon. After a retrial, he was acquitted on 1 August 2008 with Pluto square to his Mercury.

Crimewatch has been a clear astrological expression of Sue Cook’s Moon in Aries in the 8th house opposite Neptune. It has been a direct ( Aries ) appeal to the public ( Moon ) to help in the detection ( 8th house ) of unsolved crimes ( Neptune ).

It had many successes, but in the case of Jill Dando and Barry George, the public outrage and impatience for a conviction prompted by the Aries Moon, perhaps contributed to the wrong man being convicted. As George’s Sun was conjunct this Aries Moon, perhaps he was an easy and obvious symbolic target.

Incidentally, if Crimewatch does need a consultant to help with any unsolved matters, Capricorn Research would be happy to offer a less Arien and perhaps more considered view.