The astrological relationship between murderers and their victims is often a strange one and difficult to see clearly.

With most serial murderers it’s fairly straightforward to see the astrological links to them committing their horrendous crimes. It’s a lot harder to spot the significators of their victims however.

This is probably due to the fact that many serial killers are indiscriminate in the way they go about their deeds. Many victims just happen to be in the wrong place at the wrong time.

Generally speaking the more personal the killing the more identifiable the chart of the victim. This is particularly the case if someone murders a member of their own family.

When 15 year old Gerald McCra Jr killed his father, mother and sister the astrological links of the whole family as killer and victims were extremely strong. This article explains it The McCra Family Murders.

The chart of Suzanne Azar is a case in point.

Azar has her Sun in Cancer which automatically brings the family into focus. She also has a 5 planet stellium in the 4th house based on two conjunctions. One is between Venus, Mars and Pluto, the other is between Mercury and Uranus.

Saturn is also in Capricorn, retrograde and conjunct the 8th house cusp.

In November 1988, a murder occurred in her family. Pluto at the time was square to her 4th house cusp and she was experiencing both her Saturn return and the transitting Uranus on her 8th cusp.

So was she the killer or the victim ?

Well in fact she was neither the killer or the direct victim, but its entirely likely that she was the one who suffered most in this tragedy. Its obvious looking at that 4th house that something dramatic and with Mars / Pluto, probably violent would happen in Suzanne’s life that would utterly change her whole family dynamic.

Suzanne Azar was the mother of four month old Geneva who was killed by her father shaking her and throwing her against a wall causing fatal head injury.

She also has a square aspect between Mars in Aries in the 7th and Neptune in the 4th exact to the minute.

So its not difficult to see that she could be on the receiving end of an unexplained act of violence from her father.

Probably the most difficult aspect in her chart is the exact Venus opposition Saturn and Uranus in the 4th house of family.

The other thing to point out is that Geneva’s Moon is in the 8th house of death in very close trine to her Saturn and Uranus.

So Saturn and Uranus are powerfully linked to the 4th and 8th houses of both mother and daughter.

David Azar, Geneva’s father and killer does not really have the kind of chart that screams out child murderer. 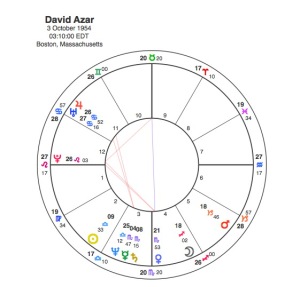 The Sun is in Libra unaspected apart from a wide square to Mars. His Moon is in Sagittarius in the 4th house.

The only seriously difficult aspect is Pluto exactly conjunct the Ascendant square to Venus in Scorpio right on the 4th house cusp, but this was enough.

At the time of Geneva’s death, the transitting Neptune was square to David’s Sun.

When discussing the charts of victims of crime, the whole area is fraught with difficulties. Such a discussion can attract criticism from people who believe astrologers are saying that the victim is somehow responsible for attracting the crime in the first place.

This is never the case but it does seem that a victim’s chart can act as a trigger for the killer.

In the case of the Azars it could be said that the chief astrological trigger was the mother, Suzanne. Her chart and particularly at her transits to the 8th house cusp at the time, indicated serious 4th house family suffering.

In a way David’s transits were more tied up with the development of his court case and the various appeals that proceeded from it.

David was convicted of 2nd degree murder and sentenced to life imprisonment in July 1989. Neptune was again square the Sun but this time it was joined at the same degree by Saturn.

He appealed but the conviction was affirmed in 1992 when Pluto was conjunct his Venus square Pluto and his Ascendant.

After 12 years in prison, Azar successfully challenged the verdict, claiming the judge issued erroneous instructions to the jury that led to an unfair conviction. The appeals court ordered a retrial, but Azar pleaded guilty to manslaughter, a lesser offense than the original charge of second-degree murder, and the judge sentenced Azar to time already served. He was released in May 2002.

And appropriately Pluto was conjunct David Azar’s Sagittarius Moon in 2002.

David Azar obviously was guilty of the most horrendous crime imaginable but could we really say that he would have murdered his baby daughter if he had been married to someone else ?

Questions like this are hypothetical and irrelevant anyway. Suzanne had to marry David, they both had their Moons conjunct in Sagittarius and Suzanne’s was in her 7th house of marriage.

When tragedies like this occur we all naturally want to ask why. Our own desperation to find answers is probably motivated by a suspicion that its a harsh cruel world where anything can happen.

Astrology can help us come to terms with even the most horrible events.

It doesn’t necessarily answer the question – why. It simply says – because.