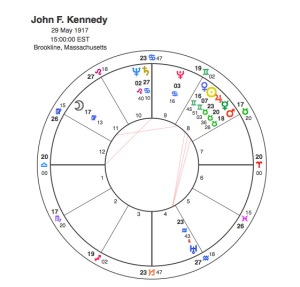 John F. Kennedy was a US President who was assassinated while still in office.  Kennedy has five planets in the 8th house which is traditionally associated with death. These five include the Sun and Jupiter which suggests somebody who died whilst at the peak of his career. Mercury, Mars and Jupiter close to the 8th house cusp are square to Uranus indicating an unusual and sudden occurrence that would be related to the death.  JFK’s Sun was also in  square to his Moon in Virgo in the 11th, the house of politics.

Kennedy’s choice of running mate for the 1960 US Presidential election was Lyndon Johnson. This was not the obvious choice at the time as Johnson himself had stood for the Democrat ticket but didn’t get the nomination.

Lyndon Johnson has a stellium in the first house, most of it in Virgo. Jupiter is conjunct the Ascendant as well as the Sun and Mars, suggesting someone who was on the way to the very top. Virgoans, however are often happy to do the work behind the scenes whilst someone else takes the credit. In a sense, the ideal Vice President but Jupiter rising in Leo would want and expect the top job. There is an interesting Sun / Moon match up between the two men as Kennedy’s Moon is in the same sign as Johnson’s Sun and Kennedy’s Sun is exactly square Johnson’s Moon. This would be an excellent combination for any two people in a relationship but it also shows the extent to which their fates were intertwined.

During 1960 Pluto moved from 3 – 8 degrees Virgo therefore making conjunctions to all of Johnson’s Virgo planets but by election day on 8th November it was at 7 degrees 52 exactly square to Kennedy’s Sun ( the timing is so spot on as to unbelievable ).  As Pluto is just ahead of the Sun in JFK’s birthchart its only possible transit during his lifetime would be the square. This was obviously his watershed moment.

President Kennedy was assassinated in November 1963, Pluto was at 14 degrees Virgo approaching his Moon. When two planets are aspected at birth, like JFK’s Sun and Moon, any transit would be operational for the whole time it takes to aspect both of them, so Pluto would be aspecting this duo from 1960 to 1967. So the 11th house of politics and the 8th house of death were linked for the whole of this period.

During the mid 60s Pluto and Uranus were conjoined in Virgo and and it’s almost impossible to separate them, for any transits during this time the planets should be considered to be working as a pair. In the Autumn of 1963 Uranus had reached  8 – 9 degrees Virgo, the same point that Pluto had been at in November 1960. Uranus was therefore in square to Kennedy’s Sun and conjunct Johnson’s Moon and Mercury. Pluto brought the Kennedy /  Johnson ticket to power in 1960 but it was its partner Uranus at the same degree that pointed to Kennedy’s assassination and the transfer of power to President Johnson.

There have been a number of conspiracy theories around the assassination of John F. Kennedy. Lee Harvey Oswald, the assumed assassin was himself shot by Jack Ruby before his case could be heard. The reasons for Kennedy’s death are unclear to say the least but most conspiracy theorists believe he was killed because he was a figure who was too liberal, whose popular Presidency was driving an agenda for change that threatened some of the traditional power structures in the US. This would certainly fit with Kennedy’s chart. Virgo is the sign of the workers and the underdog and the Moon in Virgo in the 11th house of politics would instinctively work to support the downtrodden in society. Kennedy’s square from the 11th house Virgo Moon to his 8th house Sun could easily indicate that he was assassinated  because of his liberalism.

Was it a conspiracy ? It’s hard to say whether the assassination was one man’s actions alone or whether he was linked to other shady but powerful figures. From an astrological perspective it was Uranus that pulled the trigger, but perhaps the planet was acting on behalf of it’s partner in crime Pluto, and they don’t come more shady and powerful than that !