A good tip for any trainee astrologer wanting to know how to quickly get to the essence of the major themes in a persons life is look for a T Square. This is an aspect pattern where two planets are in opposition and another is 90 degrees to both of them. The opposition shows where the major tensions in a person’s life are and the apex planet shows how these tensions impact. While the Sun and its aspects in a chart would reveal who the person is, a T Square will often show how they will be remembered. 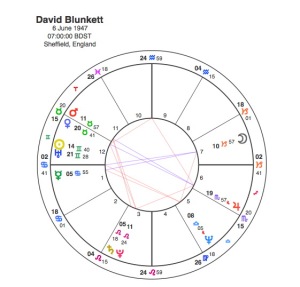 David Blunkett has a Sun / Uranus conjunction. Uranus is the rebel planet, it always looks to do things in a non conformist manner. For thousands of years, the solar system was believed to end at Saturn because the outer planets can not be seen with the naked eye. Saturn, therefore in astrology was always associated with ends and limits.

Uranus was discovered in 1781 and has been seen as the planet that broke through the previously accepted traditional limits. The time of it’s discovery coincided with the American, French and Industrial Revolutions and Uranus has always been associated with political reform and indeed revolution.

Gemini is the sign of communication, so Blunkett’s Sun / Uranus conjunction here would be a perfect placing for a left wing politician and man of the people.

David Blunkett was born with improperly developed optic nerves due to a rare genetic disorder. He grew up in an underprivileged family which endured a tragedy when his father was gravely injured in an industrial accident and died a month later. This left the surviving family in poverty as they received no compensation.

Blunkett studied Politics and at the age of 22, became the youngest-ever councillor in Britain, being elected to Sheffield City Council. Within 10 years Blunkett became the leader of one of the furthest left of all Labour councils. Sheffield was called the  “People’s Republic of South Yorkshire” to describe the left-wing politics of its local government and was designated as a nuclear-free zone.

David Blunkett wasn’t just content to be a rebel maverick however. His left wing credentials got him onto the Labour NEC and elected as an MP but he had the Moon in Capricorn, the mark of a consummately pragmatic politician and this combined with a Cancer Ascendant gave him instincts that were more conservative than his Sun / Uranus conjunction would suggest.

After Labour’s landslide election victory of 1997 he became Education Secretary and pursued tough policies, ready to take on the teaching unions and determined to ensure basic standards of literacy and numeracy. At the start of the Labour government’s second term in 2001, Blunkett was promoted to Home Secretary. Pluto was opposite David Blunkett’s Sun that year, marking the peak of his career.

Many observers saw him as a future Prime Minister, and a rival to Gordon Brown’s hopes to succeed Tony Blair but a look at his chart would inevitably cast doubts on his ability to reach the very top.

David Blunkett is unusual in that he has two T Squares. Oppositions between two planets pulling in different directions tend to push people towards greater activity and achievement because they are forced to resolve the tensions those planets create. This is magnified if the oppositions form part of a T Square and even more so if there are two of them. This explains the driving forces that propelled a blind person from a poor background to become Home Secretary.

One of the T Squares has Pluto as an apex planet which means that Blunkett’s life would be characterised by sudden dramatic changes in circumstances. This would explain the meteoric rise to prominence as the youngest ever councillor. Pluto often acts as a metamorphosis enabling the person to shed the skin of one character in order to suddenly move on to become something else altogether and would explain Blunkett’s quick jettisoning the left wing hero status to become the tough talking cabinet minister.  The trouble with Pluto’s changes is they can take someone down as swiftly and suddenly as they went up.

Blunkett has Uranus just after the Sun which means that any transit to the Sun would be followed by a sudden change. He became Home Secretary in 2001 when Pluto was opposite his Sun marking the watershed of his life and the peak of his career. In 2004 – 5 Pluto opposed Uranus, a transit that would always result in change but usually of the seriously disruptive variety. To understand what kind of change we need to look at Blunkett’s other T Square.

The second T Square is far more important as it includes Blunkett’s Moon and Ascendant. This one has Neptune as the apex planet. Neptune is a very positive influence in the world of the arts or religion but it does politicians no favours at all. It usually works in an undermining fashion particularly when it has difficult aspects. An apex Neptune can often be the cause of a fall from power and particularly where there is some kind of scandal.

So what kind of scandal ? The Moon is in the 7th house so it would have something to do with a relationship but then its in the emotionally conventional Capricorn so a classic sex scandal is unlikely.

In December 2004, David Blunkett resigned his position of Home Secretary after a bitterly-dissolved relationship with Kimberly Quinn led to allegations that he had used his influence to fast-track visas for his ex-lover’s children’s nanny.

This is exactly what the T Square is referring to. The Moon in the 7th house is opposite Mercury in Cancer. Mercury rules written documents and Cancer rules children particularly the protection of them. So Blunkett’s partner Quinn ( Moon in the 7th ) had a problem ( opposition ) with acquiring a visa ( Mercury ) for her children’s nanny ( in Cancer ). Blunkett’s attempts to use his influence to resolve this problem caused a scandal and his resignation ( opposition T Square apex Neptune ).

There is a simple innocent beauty about astrology that describes the comings and goings of human existence so perfectly.

As the owner of two T Squares, David Blunkett wasn’t finished yet, however and following the 2005 general election he was returned to the cabinet as Secretary of State for Work and Pensions.

Two weeks before the election he took up a directorship and bought shares in a company proposing to bid for government contracts to provide paternity tests to the Child Support Agency – part of the Department for Work and Pensions, of which he was to become Secretary of State.

Blunkett had arranged to dispose of the shares but his political opponents claimed there was a conflict of interest.  He was found to have not broken the ministerial code and that there was no conflict of interest, no failure to declare  shareholding or business connection with the company. Despite Blunkett declaring that “I have done nothing wrong” he resigned in November 2005. The general view was that his position had become untenable.

The problem is that astrological symbols are not merely tied to one event. The T Square soon got to work again. Capricorn rules work and old age so we have a conflict ( opposition ) between his role as Work and Pensions Minister ( Moon in Capricorn ) and holding shares in a company that was involved with paternity tests for child support ( Mercury in Cancer ). The result was the same –  accusations of political scandal and resignation ( apex Neptune ). This time his career as a Cabinet Minister was well and truly over.

You really couldn’t make it up, it would be impossible to describe these two apparently different affairs more accurately.

David Blunkett’s T Square predicted what would happen to a promising stellar political career. Pluto’s transits to his Sun / Uranus conjunction showed us when.