Football in England might not be the best but it is the most popular – thats the myth projected by Sky and BT anyway. In fact its not even the most watched thing with Premier League in its name, not by a mile. The record TV audience for the Manchester derby stood at 4 million, the 2017 final of the IPL reached nearly 10 times that number.

Cricket has always been the sport of choice in India and these days it pays its players so well that many are considering giving up the longer form of the game to focus on the Spring bonanza on the subcontinent.

That it would be a huge financial success was never in doubt. 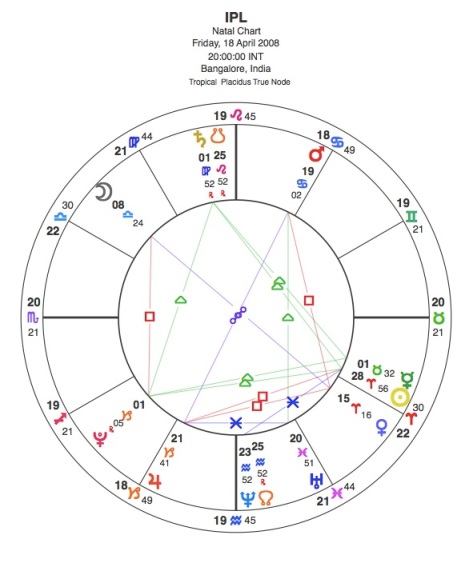 An extremely tight Grand Trine in Earth signs in material houses with Mercury, Saturn and Pluto all contained within a degree and the Sun involved as well says it all.

In fact this was one of the first major sporting charts with Pluto in Capricorn and its placing in the 2nd house shows the explosive financial impact that the tournament has had.

The T Square with a Mars / Jupiter opposition focusing on an apex Venus in Aries in the 5th, shows how exciting and popular it has become. This is all about bludgeoning big hitting and fast paced action, so utterly different from the cricket we used to know.

The very first match did not disappoint with a scarcely believable 158 not out ( how is that possible in 20 overs ) by New Zealander,  Brendan McCullum gave Kolkata Knight Riders an easy victory over Bangalore Challengers.

The contest chart predicted an easy victory as the Moon applied to Venus ruling Kolkata without any impediments. As the Moon was in Libra, it was in the Knight Riders pocket anyway.

The 2018 edition promises to be even more exciting and unpredictable than ever as Uranus will be conjunct the Sun in the IPL chart.

Uranus moves into Taurus and hits the IPL Grand Trine, a sure sign that astrology will be used to make lots of money, and this is a bandwagon that Capricorn Research is happy to hitch up to.

As a taster here are some of the players to look out for.

For Chennai Super Kings, all rounder Kshitiz Sharma is a new acquisition, but Uranus conjunct his Sun should ensure he has a big impact. English fast bowler Mark Wood has yet to really make his mark, but Pluto is conjunct his Sun this year and the IPL could be just the time for him to explode.

Delhi Daredevils have New Zealand fast bowler Trent Boult and he has both Jupiter square his Mars and Uranus square his Sun, so a lot of wickets there then. Both England’s Jason Roy an Prithvi Shaw should be in the runs as well.

For Punjab Kings, batsman Manoj Tiwary has Jupiter on his Sun at the start of the tournament and all rounder Mayank Dagar has the same later on. Chris Gayle is always an immense presence and will no doubt continue to be so with Uranus square his Sun.

Kolkata Knight Riders have the two Australian Mitchells, Starc and Johnson, but their standout bowler could be Vinay Kumar with Jupiter square his Sun. Another Aussie, Chris Lynn should be in the runs.

South African batsman A B De Villiers will do well for the Bangalore Challengers with Jupiter conjunct his Mars. Bangalore have a strong side packed with big names but Zimbabwean Colin de Grandhomme could turn a few heads.

Sunrisers Hyderabad also have some big name hitters, and New Zealand’s Kane Williamson will make a big impact as usual but it could be Shikhar Dhawan that takes the plaudits this season, with Deepak Hooda also contributing well.

Rajasthan Royals’ Australian D’Arcy Short should have a long impact as Jupiter is square to both his Sun and Mars. Ankit Sharma should do well but my tip for surprise player of the tournament is Royals Sanju Samson. With Jupiter conjunct his Sun and Jupiter and square his Mars, he should really live up to his biblical name.

Much as I love the longer form of the game, I can’t wait for the IPL to get started. With my success rate on cricket predictions this winter has been 90%, so by the end of the tournament I should be as rich as the players. If you want to join in don’t forget to Get Ahead of the Game