We would all like to have success in our chosen career, to be acknowledged as a leading figure amongst our peers, but if we had worldwide acclaim, would we be able to cope with it ? 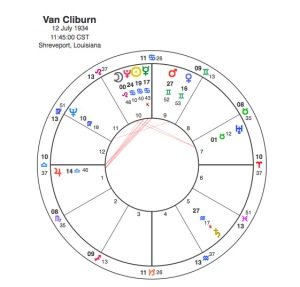 The 10th house is the place of career and social status so to have 4 planets there is obviously a good start. The fact that two of them are the Sun and Moon means that this person is on a powerful career drive. As Pluto is conjunct both of them, even more dynamism and potency is added together with a tendency for sudden breakthroughs and quantum jumps.

Jupiter expands everything it touches and as its rising in square to the Sun we have an unstoppable character who will definitely reach the top of his chosen profession.

When Pluto is in the 10th house and conjunct the Moon, its often the case that the person becomes successful in their chosen career in childhood as was the case with Melissa Sue Anderson.

Its also likely that the child’s mother will have a big part to play.

Van Cliburn’s mother was herself an accomplished pianist who had studied under a student of Franz Liszt, discovered her son playing at age three and mimicking one of her students. She began his own lessons. He developed a rich, round tone and a singing voice-like phrasing, having been taught from the start to sing each piece.

At this age Pluto’s conjunction with the Moon had become exact, but also Jupiter had renewed its connection with his Sun, this time by opposition.

Jupiter was to continue to play an important part in his life. At age 12, on his first Jupiter return, he won a statewide piano competition, which enabled him to debut with the Houston Symphony Orchestra.

The first International Tchaikovsky Competition in 1958 was an event designed to demonstrate Soviet cultural superiority during the Cold War, on the heels of that country’s technological victory with the Sputnik launch in October 1957. Cliburn’s performance at the competition finale of Tchaikovsky’s Piano Concerto No. 1 and Rachmaninoff’s Piano Concerto No. 3 on April 13 earned him a standing ovation lasting eight minutes. When it was time to announce a winner, the judges were obliged to ask permission of the Soviet leader Nikita Khrushchev to give first prize to an American. “Is he the best?” Khrushchev asked. “Then give him the prize!” Cliburn returned home to a ticker-tape paradein New York City, the only time the honor has been accorded a classical musician. His cover story in Time magazine proclaimed him “The Texan Who Conquered Russia”.

Jupiter was square to Van Cliburn’s Moon and Pluto at the time.

For the next 20 years, he performed all over the world.

But the trouble with having a Sun / Pluto conjunction is that there will come a time in ones life when everything will be transformed, the past will be swept away and a completely new situation would be the result. This will invariably come when Pluto makes its square aspect to the Sun by transit.

It happened for Van Cliburn in 1978 – 80. In 1978 with Pluto conjunct his Jupiter and applying square to his Sun, the death of his father and manager had prompted a situation where he became overwhelmed by expectations, crippled by stage fright and exhausted by his celebrity. Van Cliburn stopped performing and withdrew into the Fort Worth, Texas home that he shared with his mother.

Jupiter was also conjunct his Sun in 1978. It had all literally become too much.

His retreat from public life continued for 9 years until in 1987, he was invited to perform at the White House for President Ronald Reagan and Soviet president Mikhail Gorbachev and afterward was invited to open the 100th anniversary season of Carnegie Hall.

Jupiter was square to his Sun again in 1987 but from Aries so it was also opposite its natal position.

In 1994 Uranus and Neptune were in his 4th house opposed his Sun and Pluto when his mother died aged 97.

In 1998, with Neptune opposite his Moon, Van Cliburn was named in a lawsuit by his domestic partner of seventeen years, mortician Thomas Zaremba. In the suit, Zaremba claimed entitlement to a portion of Cliburn’s income and assets and asserted that he may have been exposed to HIV, causing emotional distress. The claims were rebutted by a trial court and upheld by an appellate court, on the basis that palimony suits are not permitted in the state of Texas unless the relationship is based on a written agreement.

He died in February 2013, with Pluto square to his Ascendant.

Van Cliburn had an extraordinary career powered by Jupiter and Pluto but there was a time when it was all too much. Which is some small consolation in the office on a Monday morning.