Each Zodiac sign is said to rule a particular part of the body, starting with Aries ruling the head and finishing with Pisces ruling the feet. Taurus rules the throat and for this reason, together with the sign’s natural artistic tendencies has always been associated with singers. Its a simple symbolic connection but one that is supported by research.

Capricorn Research has a collection of 1120 Singers and Taurus is the most common sign with a score of 130% of the expected figure. As this is quite a large sample the distribution produces a ” p ” score of 0.015. This is not a staggering figure, there being two levels of statistical significance, the first is 0.05 and the second is 0.003. Anything lower than the second figure is deemed to be statistically significant, anything lower than the first one is considered to be worth looking at.

In the category of Pop / Rock Singers there is a sample of 680 and Taurus scores even higher here with 141% of the expected figure. This is obviously a smaller sample but the p figure still holds up at 0.018.

One very good example of a Taurean pop singer is the Irish Bono, the lead singer of rock band U2. 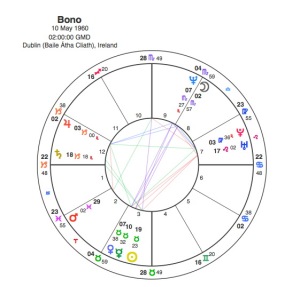 Bono has the Sun along with a conjunction between Mercury the planet of communication and speech and Venus, the artistic ruler of the sign all in Taurus.

Bono has an exceptionally wide tenor vocal range particularly for a rock singer. His highest note was recorded at C♯5, and his most notable reached note was a B5 which can be heard in several of his songs. He is characterised by his use of falsetto, reaching a G6 and has also reached Pavarotti’s notes at a G♯5. His vocal range in live performances was from C#2 to G#5.

Bono’s real name is Paul David Hewson but when he was young he was part of a surrealist street gang that had a ritual of nickname-giving. Bono had several names including ” Bono Vox of O’Connell Street”, and finally just “Bono”. Bonavox is a Latin phrase which translates to “good voice”. He initially disliked the name but when he learned it translated to “good voice”, he embraced it.

Bono has an exceptionally auspicious Grand Trine ( indicated by the green lines in the chart ) in Earth signs between Venus in Taurus, Jupiter in Capricorn and Pluto in Virgo. Jupiter is the great benefic, it expands everything that it touches and brings success and particularly in good aspect with Venus material wealth and possessions. The fact that he also has the Sun in flowing trine aspect with his Capricorn Ascendant points to someone whose gifts are destined to bring him great prominence.

The Grand Trine is a gift from the gods, everything comes to the person easily and success can be achieved without the same degree of struggle that is required of people with other major aspect patterns like T Squares and Grand Crosses.

The reason that trine aspects do not feature so strongly in these astrological writings is that because the individual is used to things coming to them easily, they can tend towards laziness and not be prepared to put in the same amount of effort that someone with a lot of square aspects is forced to do by the nature of the tension between the planets in square to each other.  At the end of the day, it is often the people who are forced to act by squares and oppositions that achieve the most success whilst people with lots of trines can be quite content to float through life.

So Bono’s Grand Trine would give him the incredible singing gifts that he undoubtedly has and would bring great material success but on its own might just have left him with a typical rock star’s life of adulation and sex and drugs and rock and roll with a number of chateaus in the South of France and elsewhere.

The Kite is an even more auspicious pattern than the Grand Trine itself because it involves other planets in easy, harmonious and flowing connection. What the Kite also does is give a much stronger focus for the individual’s energy because it is centred around an opposition. For Bono, the Moon and Neptune are pulling in opposite directions from his Venus forcing him into action in a way that would not happen with just the Grand Trine.

The Moon and Neptune is a very compassionate conjunction which often comes from a spiritual base. Bono has this conjunction in Scorpio so he feels these things deeply and passionately and he has apparently inherited a strong religious conviction from mother. The Moon rules the mother, Neptune rules spirituality and Scorpio rules deeply held and passionate convictions. The conjunction is placed on either side of the 9th house cusp so his focus for these feelings would be towards foreign countries as the 9th house rules long distance travel.

The opposition is the thing that really gets him motivated in life and his Moon / Neptune in Scorpio strongly held compassion for the 9th house of foreign countries sits alongside a classic Venus in Taurus love of money and the beautiful things that money can buy. This apparent contradiction between these two opposite pulls finds its expression in his intense crusade for financial aid to foreign countries.

Interestingly, another person with a Grand Trine with a Kite to a Moon / Neptune conjunction is the Dalai Lama . The Tibetan leader’s pattern is different from Bono’s in that it involves a more compassionate and spiritually motivated Water Grand Trine together with the humility of Moon / Neptune being in Virgo.  The Dalai Lama’s concern is for a more spiritually connected and harmonious relationship with all of humanity whereas Bono’s chief aim reflects the Earth Grand Trine of a greater material equality.

Bono has certainly been on a mission. He is widely known for his activism concerning Africa,  having organised and played in many benefit concerts and has become one of the world’s best-known philanthropic performers. He has met with many influential politicians and was named the most politically effective celebrity of all time by the National Journal.

He has also been called “the face of fusion philanthropy”, both for his success enlisting powerful allies in government, religious institutions, philanthropic organisations, popular media, and the business world, as well as for spearheading new organizational networks that bind global humanitarian relief with geopolitical activism and corporate commercial enterprise.

Like many celebrities who get involved with philanthropic work, Bono has received a fair amount  of criticism around it being hypocritical to have so much money oneself and yet campaign on behalf of the starving billions. This criticism could not come from anyone who has an understanding of astrology however.

Most people tend to assume that everyone else should be consistently one thing or another. People are not permitted to contain different and even opposite characteristics within themselves. Why this assumption is so widely held is strange and actual life experience would tend to suggest that its foolish to view people in such a one dimensional way.

Most people’s birth charts contain at least one opposition and so they would experience two opposing pulls and have to find a way of integrating both sides of their divergent nature into one life. If they try to focus on one end of the opposition only, the other end would simply force them to recognise and act upon it.

In Bono’s case he has to be the mega rich rockstar of Venus in Taurus, Grand Trine, Sun and Ascendant in Earth but he also has to be the passionate worker for foreign aid of the Moon / Neptune in Scorpio.  Without the Moon / Neptune he would simply be a hedonistic creature, without the Venus and everything else in Earth he would  have no influence or impact on the causes that he so strongly wants to help.

So when would all this play out in Bono’s life ? As usual we just have to look at the transits of Pluto. The Ascendant rules our appearance and U2 first broke through onto the music scene in 1980 as Pluto was square Bono’s Ascendant.

The major transit that provided the watershed of his life was Pluto’s arrival in the Kite formation with a conjunction to the Moon and sextiles to Jupiter and its own natal position in 1984 – 5.  In 1984, Bono sang on the Band Aid single “Do They Know it’s Christmas?/Feed the World”.

Bono’s real turning point was on July 13, 1985 when the group took the stage of Wembley Stadium in London for the African poverty fundraiser Live Aid.

Toward the end of U2’s set, Bono spotted 15-year-old audience member Kal Khalique being crushed against the security barrier and leaped into action. He stepped down from the stage, pulled her out of the crowd and slow-danced with her tenderly as the band kept playing. Beamed to a worldwide audience, the dance embodied the spirit of the event in a subtle but powerful way—one person reaching out to acknowledge the humanity of the other.

Who knows whether Bono actually saved her life but global television witnessed a rock god performing a saviour’s act. Bono became a global star that day but he had also hitched himself powerfully to the Live Aid phenomenon.

As Pluto moved through the Kite formation up to 1987, Bono and U2 played a bigger part in awareness and fund raising concerts including performing on Amnesty’s Conspiracy Of Hope tour of the United States in 1986 alongside Sting.

There is something about rich celebrities who make a big noise about their philanthropic work that can be rather grating. In Bono’s case an understanding of his chart shows the motivation to be genuine. He has certainly used his influence to push politicians to greater efforts in terms of foreign aid.

Vox populi is a Latin phrase that literally means voice of the people and this seems appropriate for the man who used to be called Bono Vox.