The character of every astrological sign is a powerful reaction to the one that precedes it. Its as if the Universe has got so sick of a particular type of behaviour after a whole month that it has to provide the exact opposite for the next one.

Just try examining any sign, Gemini is all about change and adaptation, rebelling against what has become fixed and solid in Taurus. Virgo is about humility and taking a back seat after the centre stage excesses of Leo. Capricorn contraction after Sagittarius expansion, the list goes on.

But nowhere is this contradiction between two adjacent signs more transparent than that between Pisces and Aries. This is no doubt because Pisces is the end of one cycle and Aries the start of another. The Piscean personality wants ultimately to lose its sense of individual self, to dissolve into the vastness of existence.

Aries, on the other hand wants to assert the individual self against the whole world. It is the beginning of life, whereas Pisces is the end of it. Pisces sees every shade there is and can empathise with others because it feels their pain. Aries sees only black and white, self and others, winners and losers.

But what happens when a chart has a combination of Pisces and Aries, this must be a very difficult one to juggle.

On some level it probably happens for many people with the Sun in one of those signs because there’s a fair chance that Mercury and / or Venus will be in the other one. But what about if the other sign is really strongly tenanted ?

Capricorn Research has a collection of 66 charts of people who might be called astronomers, astrophysicists or cosmologists.

Despite the small sample the results are absolutely staggering, 15 of the 66 have the Sun in Pisces ( 3 times the number you would expect ). There are also no Aquarians at all.

This Sun sign distribution gives a p figure of 0.00042 which is incredible in a sample so small. When you consider that anything below 0.01 has to be considered as proof of an effect, you would think that some of those astronomers might be interested.

The fact that its not a large collection is possibly because many of these people are extremely reluctant to provide birth times for the work of astrologers who they regard as the devil incarnate. Two cosmologists who have yet to produce times of birth are Brian Cox and Richard Dawkins. For more information on Dawkins see the article Richard Dawkins – Staunch Defender of Sun Sign Astrology.

Cox is a Sun Pisces but he has to carry this placing alongside an exact and extremely powerful Mars / Saturn conjunction in Aries.

Dawkins is a Sun Aries, the simplicity of which is complicated by having the Moon in Pisces in opposition to Neptune.

If it wasn’t for the fact that these two so called scientists have come out so vehemently against astrology, Capricorn Research might be tempted to feel sorry for them. It must be so difficult to hold Pisces and Aries at the same time.

The study of astronomy is so vast and infinite that it seems only natural that so many of its adherents have Pisces strong. To follow this subject but at the same time be so egotistical and dismissive of people with other views of the Universe, smacks of Aries.

As its so difficult to contain both Aries and Pisces within the same character, it seems that both Cox and Dawkins have opted to put all the eggs in the Arien basket particularly when dealing with astrology.

One astrophysicist with a similar combination who quite clearly did not do this and who will be remembered long after the other two have disappeared is Albert Einstein. 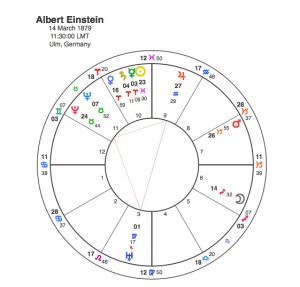 Einstein was one of the most important characters of the 20th century, being dubbed the father of both modern science and the atomic age.

Like so many in his field he had the Sun in Pisces, but the most important planet has to be Pluto, the real father of the atomic age.

Pluto is the apex of a powerful T Square involving a Jupiter / Uranus opposition which runs from the 3rd to the 9th houses. Pluto is also in close aspect to his Sun ( sextile ). This clearly shows his role in the expansion of the scientific view of the Universe.

As regular readers will know, the major turning points in someone’s life tend to coincide with Pluto’s transits to the Sun. This is even more so when someone has a natal aspect between the two.

Pluto was moving quite slowly for most of Einstein’s lifetime and would only make one major and two minor aspects to his Sun.

The major one was in 1905 – 6 when it was square to his Sun. 1905 was Einstein’s ” annus mirabilis “. Up until this point he had been working in obscurity in the Swiss patent office. In 1905 he published 4 papers which included in September on one the Special Theory of Relativity and in November, the one on matter and energy containing the most famous equation ever, e = mc2.

In 1933 – 34 Pluto was trine his Sun. In 1933 while on a visit to the United States, Einstein knew he could not return to Germany with the rise to power of the Nazis under Germany’s new chancellor, Adolf Hitler, so he emigrated to the US.

In April 1955 Einstein died with Pluto inconjunct his Sun and square its own natal position.

So what would these astrophysicists have made of astrology’s proof in their own subject. There’s no doubt Cox and Dawkins would continue to keep the heads buried in the sand, despite the fact that Dawkins owes his own global reputation via the God Delusion to Pluto’s transit in square to his Moon / Neptune opposition in 2006 when it was published.

But these two have gone to great lengths to drown their Piscean side in Arien egotism and self promotion.

Capricorn Research feels that Albert Einstein would not have responded in such a narrow minded fashion. If these facts had been presented to him he may well have been intrigued by them. We may even have had a theory of true relativity.