Everyone can spot a Jehovah’s Witness within a split second of opening the front door. We’re not sure exactly what it is, the fact that there’s always two of them or that they dress like something out of the 1950s, or the particular type of cheesy concerned smile, but we know enough to slam the door shut before they’ve had the chance to open their mouths.

On occasions I have given some of them a chance. Not much of one you understand, but I ask them whether its true that they believe there is only room for 144,000 souls in heaven as clearly stated in the Book of Revelation ( Chapter 7, Verses 3-8 ).

Then I suggest that its probably full up by now and if not they shouldn’t risk one of their spots by trying to convert me as being older, I will probably die before them and they could miss out.

That’s usually enough to get them inching the way back down the garden path, and if not then its back to door slamming time.

Back in the day when this number was revealed, everyone understood what it meant, but then they all knew about astrology.

Twelve is the number of totality because it is all of the Zodiac signs, and just in case anyone wasn’t sure they did 12 x 12 to make 144.

Then on top of that they picked a thousand because that was always the largest number. This was in the time where knowledge had to be something that was experienced rather than accumulating pieces of information that had no relevance to the person’s actual life.

They could not conceive of a million, it was probably never used in biblical times.

So 144,000 would be the astrologically ultimate infinite number. It simply meant that there’s room for everyone in heaven.

The trouble is, these days some people are so literal. They actually believe that there’s only room for the population of Peterborough up there.

But then that gives them the option of believing that God has given them a superior destiny to the rest of us.

One event that a few people take quite literally is date of Creation itself.

James Ussher was a prolific scholar  and also the Irish Archbishop of Armagh and Primate of All Ireland in the mid 17th century. He is most famous for dating the beginning of all things to 6 pm on 22nd October 4004 BC. It was a Saturday evening, naturally so the Almighty could put his feet up the following day.

Of course, these days Usher is widely regarded as a laughing stock mainly for being about 4.5 billion years out, but Capricorn Research has always had some sympathy for him, which was magnified when I saw his chart.

I’m always drawn to my fellow Sun / Moon in Capricorns who have nothing better to do with their lives than contemplate when creation started.

Ussher was clearly no idiot. Mercury conjunct Uranus in Aquarius would see to that.

And the Moon’s opposition to Neptune nicely shows his fascination with the Divine. But its not the usual floaty, mystical poet stuff here. A double Capricorn wants to take the unknowable and nail it down.

He wasn’t the only one. In Ussher’s time such a calculation was regarded as an important task, and even the physicist Isaac Newton had a go at it.  Bizarrely Newton has the Sun at 13.41 Capricorn, only 3 minutes away from Usher’s Moon.

So what about Usher’s findings ? The 22nd October when adjusted for calendar changes, puts us bang on the Autumnal Equinox.

So this was the moment that God looked at his creation and saw that it was good. And looking at this chart, you can hardly blame her. 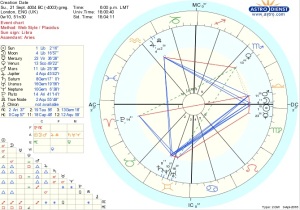 Libra is the most beautiful of all signs, it is all about the Autumn colours.

0 degrees Libra is the epitome of balance and harmony. The 7th house cusp does the same.

So to have the Sun conjunct the Moon at the beginning of Libra on the cusp of the 7th house is probably is idyllic as it gets.

And the most favourable of all aspect patterns is the Grand Trine, so to have one in Air from the Sun and Moon including Jupiter, Saturn, Uranus and Neptune is the best astrological representation of paradise that I can think of.

Four thousand years or four billion, who cares ? Both time scales would be irrelevant to people in the 17th century anyway. They lived much more in the moment than we do and they weren’t so impressed with very big numbers.

What they would have wanted was something that gave the feel of the thing, a symbolic representation of the quality of such a moment. And having trawled through thousands of other moments since that Sunday in 4004 BC, Capricorn Research has so far failed to come up with a chart anything like as beautiful as this one.

In fact there’s only one little problem with it.

Mars is opposite Pluto in Aries in the 1st house. An equally perfect symbol of the egotistical and aggressive humans destined to make a mess of it all.