So what would be expect to see in her chart. As a writer Mercury would be strong, and because much of her writing is aimed at children and teenagers, the Moon or the 4th house would be accentuated. As the subjects covered are radical and controversial we would expect Aquarius or its ruler, Uranus to be to the fore. 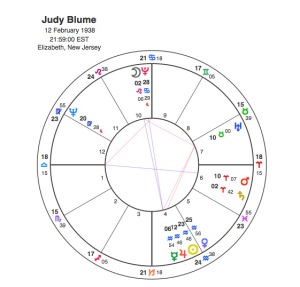 Judy Blume has a 4 planets in Aquarius and 3 in the 4th house, including the Sun and Mercury. Her Moon is elevated at the top of the chart and it is part of a T Square in opposition to Mercury with an apex Uranus.

Mercury is conjunct Jupiter in the 4th house, showing her success as a children’s writer. The Moon conjunct Pluto indicates the ability to tap into her reader’s deeply held emotional issues and concerns being able to voice these matters in a caring, constructive and protective way. As the Moon is in Leo she expresses them in a dramatic and entertaining fashion. This conjunction is in the 10th house at the top of the chart so her impact is enormous and she can speak for a whole generation.

The opposition from Mercury to the Moon focuses by T Square onto Uranus in the 7th house. The whole thrust of her writing is towards more openness and freedom ( Uranus ) in relationships ( 7th house ).

An apex Uranus in the 7th house would also have something to say about her own relationships. Uranus is unpredictable and wants and needs freedom resisting any attempt to be tied down. Judy Blume was married three times, the first one for 17 years which she would later describe  as “suffocating”.  Her 2nd marriage lasted for 2 years and she described the split  “It was a disaster, a total disaster. After a couple years, I got out. I cried every day. Anyone who thinks my life is cupcakes is all wrong.”

The second divorce occurred in 1978 with Pluto conjunct Blume’s Ascendant. This year also marked an important turning point in her career as she tackled another genre—adult reality and death. Her novel ‘ Wifey ‘ which was published in that year has become a bestseller, with over 4 million copies sold to date. Another novel ‘ Smart Women ‘ shot to the top of The New York Times best-seller list in 1983 with Pluto square her Moon.

With the Moon in Leo in the 10th house opposite Mercury in Aquarius in the 4th, Judy Blume was the Queen of adolescent fiction.