Capricorn Research likes nothing better than a good conspiracy theory. If studying Politics at University taught anything, it was to question everything and never accept the party line without serious research. But just as everyone else is casting round looking for the sinister shadowy individuals that control these events, the writer of these pages is engaged on a quest for the real culprit – which planet dunnit ?

In most cases this is fairly straightforward. You have to look no further than Pluto who’s conjunction with the US Ascendant took the major role in 9/11 and its relationship with Mars caused the death of Princess Diana.

Pluto’s usually responsible for most of them but its not always the one that pulls the trigger. Sometimes it will groom one of the other planets cultivating a special relationship with them and making them take the flak for its deeds.

If any of the other slower movers enters Pluto territory then they are considered to be fair game. The perfect example of this is Uranus’ conjunction with Pluto in the mid 1960s.  Pluto required the  assassination of John F Kennedy in November 1963, but it made Uranus pull the trigger.

This territory naturally includes its own sign, Scorpio so when Jupiter dared to step into this sign in 1993 / 4, the giant planet became a pawn in Pluto’s power games.

Mexican politics has what might be called a colourful history, not least during the reign of President Carlos Salinas de Gortari.

Salinas has by any standard of measurement, a difficult chart. The spring of 1948 was notorious for a powerful and aggressive Mars, Saturn, Pluto conjunction in Leo and Salinas has his Moon in opposition to these three.

His Sun is opposite Neptune which is a tricky aspect for anyone. For politicians it often points to scandal with a resulting negative impact on their careers, with Richard Nixon and Teddy Kennedy as high profile examples.

He also has a T Square based on an opposition between Jupiter and Uranus which focuses on a disingenuous Mercury in Pisces.

In fact the only planet that isn’t involved in difficult and stressful contacts is the unaspected Venus right at the end of Taurus.

Capricorn Research does not wish to give the impression that difficult aspects creates baddies, far from it most of the greatest achievements of humankind have been on the back of challenging aspect patterns.

Its just that sometimes those challenges can take someone into territory that’s perhaps best left uncharted.

Whenever Pluto is in aspect with a major planet in someone’s chart, its next transit to that planet will likely trigger the most significant event in that person’s life. Carlos Salinas had Pluto opposite the Moon at birth, the only transit that it has made to the Moon during his lifetime was the square in 1988 when he became the President of Mexico.

However this event was not as straight forward as it sounds.

The Ministry of the Interior installed a modern computing system to count the votes. On July 6, 1988, the day of the elections, the system “crashed,” and when it was finally restored, Salinas was declared the official winner.  The process involved two suspicious shutdowns of the computer system used to keep track of the number of votes. Even though some declare that Salinas won legally, the expression “the system crashed ” became a colloquial euphemism for electoral fraud and ex-president Miguel de la Madrid later admitted that the elections had been rigged.

This small matter did not affect Salinas Presidency. His term of office oversaw a period of rapid growth coupled with low inflation which gave Mexico a prosperity not seen in a generation and Carlos Salinas’s popularity and credibility at the time was high.

But it was the last year of his term of office where things started to go wrong.

Salinas’ campaign manager for his election victory was Luis Colosio.

The first thing to note about Colosio’s chart is that he has the Sun in Aquarius opposite Pluto ( remember Salinas had the Moon in the same sign opposite Pluto ).  Colosio also has Jupiter involved in this opposition.

Aquarius of course is the sign most associated with politics as is the 11th house. Luis Colosio had Mars conjunct a retrograde Neptune there, again not a great indication of a successful political career.

The transiting Neptune was square Colosio’s Mars during Salinas’ election campaign in 1988 and also square its own position as he worked his way into Salinas’ cabinet in 1992.

Perhaps Colosio should have heeded the warnings of Neptune, but the planet’s very nature is one of illusion, creating the image of dream like success only to find out that it was exactly that, a dream.

Mexico’s constitution permits presidents to remain in power for only one term, so Salinas would have to stand down.  Colosio apparently enjoyed the president’s favour, so his party announced he was to be its candidate for the upcoming presidential election.

But by this time Pluto had taken over. In 1993, with the transitting Pluto in square to his Sun, triggering the birth opposition,

This proved to be the very peak of Luis Colosio’s life.

Salinas’ support was motivated by rumours that his close friend, Manuel Camacho would replace Colosio as the candidate. Camacho eventually declared that he wouldn’t run. The day after Camacho’s statement, Colosio was killed.

On March 23rd 1994 at a campaign rally, Luis Colosio was shot in the head.

The shooter, was Mario Aburto Martinez.

Martinez had an interesting chart for an assassin. The Sun is exactly conjunct Uranus showing a strong political motivation.

A Mars, Mercury, Pluto conjunction rising indicated aggressive tendencies, but the thing that really did the was the Moon conjunct Venus and Jupiter.

How can it be that such a benign conjunction caused such an outrageous act ?

Well it was in Scorpio and opposite Saturn.

But the synastry is revealing.

In JFK’s assassination, Pluto had moved a little way past the danger point, but Uranus was bang on it.

In March 1994 the transiting Jupiter was at 14 Scorpio, conjunct Martinez’s Moon and creating a T Square to Colosio’s Sun / Jupiter opposite Pluto.

Martinez was arrested at the site and never wavered from his story that he had acted alone.

But like the Kennedy assassination there are many questions up in the air. The authorities were criticized for their poor handling of Aburto, having shaved, bathed and given him a prison haircut before showing him to the media, which started rumors about whether that man, who looked so different from the one arrested, was really the murderer.

Colosio also received three bullet wounds, and it was never clear if they could have been done by a single person or not.

Martinez confessed to the murder and was sentenced to 42 years in prison.Despite the confession and conviction, the New York Times reported that there was widespread belief within Mexico that the conviction involved a conspiracy and coverup mainly by Salinas. A later Mexican film called “Colosio, el asesinato” alleged that the Salinas government was behind the crime.

If we were looking for a link astrologically we might say that Salinas Moon at 9 Aquarius opposite Pluto at 12 Leo and Martinez Moon / Jupiter at 9 – 12 Scorpio was interesting particularly as Jupiter returns to this spot at the time of the assassination.

But it wasn’t just Colosio who met his end at this time.

José Francisco Ruiz Massieu was the brother-in-law of Carlos Salinas and was due to become the PRI majority leader in the Chamber of Deputies. All that changed in September 1994 when he was murdered by  gunman, Daniel Aguilar Treviño.

Massieu had an exact Sun / Saturn conjunction so not a good sign. But the thing that did for him was an even more exact Moon 11 Taurus square Pluto at 11 Leo.

Unfortunately Capricorn Research does not have birth details for Daniel Trevino, or for party deputy Fernando Rodriguez Gonzalez who was arrested 2 days after the murder because Treviño confessed to authorities that he  paid him $500,000 USD for his work.

Under interrogation, Gonzalez  revealed the participation of another party deputy, Manuel Muñoz Rocha linking him to the murder. Muñoz Rocha had disappeared just days after the murder but made a phone call saying that he was willing to come forward and give his side of the story. However Muñoz Rocha was never to be seen or heard of again.

On February 28, 1995, Raúl Salinas, the brother of former President Carlos Salinas, was arrested at his Mexico City home and was considered the mastermind of the Ruiz Massieu assassination. 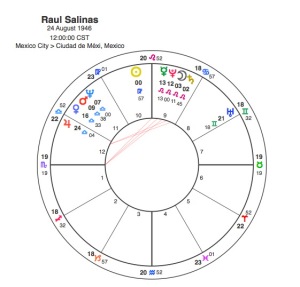 Since so much of this stuff seems to revolve around Leo / Scorpio its interesting to note that Raul Salinas had an exact Moon / Saturn conjunction there as well as a very close Mercury / Pluto one.

Jupiter was conjunct that Mercury / Pluto when the assassination took place.

And Pluto was transiting square to his Sun in February 1995 when he was arrested.

Raúl Salinas was found guilty on January 21, 1999 when Neptune was opposite his Moon. On appeal, his sentence was cut to 271⁄2 years. In June 2005 the conviction was overturned and Raúl Salinas freed.

Daniel Trevino implicated  Carlos Salinas in the murders of  both Jose Massieu and Luis Colosio.

Trevino said Massieu was killed by “Salinasism,” a term used in Mexico to refer to the Salinas machine, because “(Massieu) knew the order to assassinate Colosio was forged in Los Pinos.” Los Pinos is the name of the president’s official residence.

“Maybe not everybody agreed, but everyone accepted (the murder), some for personal interest, others for political pressure, and others to not upset the Salinas machine.”

Trevino also said that agents of Raul Salinas kidnapped his family to ensure he did not implicate his bosses.

So it does seem likely that the figure ultimately responsible for all this is the one with the Moon in Aquarius opposite Pluto.

He used Jupiter ‘s transit through mid Scorpio to get other people even including his brother to do all his dirty work for him and take the flak.

In all the best conspiracy theories the real culprit never gets brought to justice.

The whereabouts of Carlos Salinas, who fled to exile in Ireland in 1995 after his power and prestige were wiped out by the arrest of Raul, were unknown.

All a very murky and unseemly business, but perhaps an argument for astrology to be used in these kind of investigations.

So how to tell if your favourite conspiracy theory is true or not ?

Simply look at the charts for the events and the major players.

It’s safe to assume that Pluto will be responsible anyway, so if it’s clearly linked with the action then there’s nothing in the conspiracy.

If it’s another planet that triggers it then maybe there’s more to the situation than meets the eye. If that planet has some symbolic connection to Pluto then you can be confident that dark and shadowy figures lurking beneath the surface are really the ones responsible.