Boris Johnson’s name, when translated from the Russian means ” Dick Fighter ” ( go on, look it up ). Only when you know this can you understand the phenomenon. 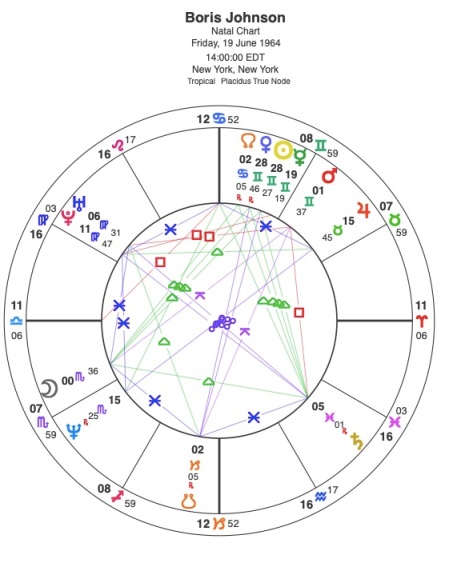 His Sun exactly conjunct Venus in Gemini and Libra Ascendant give us one picture – the tousled haired idiot who can talk the hind legs off a donkey but is a loveable rogue because of it.

The 4 planet Grand Trine including the Sun, Venus and The Moon just drips with inherited wealth and privilege giving us another.

But as always the things that are important are the ones that nobody quite sees.

This is the sheer nastiness of a Scorpio Moon coupled with a T Square apex 8th house Gemini Mars that just wants to fuck everyone.

So lets have a little look at the micro version of all this in his own love life.

According to one ex lover, Johnson is proud of his Turkish heritage and his views on monogamy ” are decidedly eastern “.

” Eastern ” as in Genghis Khan, who had 12 wives and countless other lovers with so many illegitimate children that over 16 million people are directly related to him.

But in true Moon in Scorpio fashion, the astro details of all this are quite difficult to uncover.

His first wife, was apparently born in 1964, which is not a lot of help. She did say he had a bad temper though and Johnson regretted proposing to marry her almost straight away.

His second wife, Marina Wheeler had a Venus and Mars conjunction in Cancer ( which explains why she was always referred to as the long suffering… ) and was hardly going to do the job for Dick Fighter so he gave her 4 kids whilst having multiple affairs , at least one of which produced another child.

Petronella Wyatt was one of his lovers, but she is listed as having been born in May 1968. She became pregnant and had an abortion.

His current squeeze, Carrie Symonds is a sensitive Sun, Moon Pisces with an exact ( a mere few minutes ) Venus in Taurus opposite Pluto in Scorpio.

So based on this information we can say that 1, she likes it rough and 2, she probably won’t last very long. The police have already been called once.

In recent news we see that pole dancer and ” businesswoman ” Jennifer Arcuri  reportedly received over £ 10,000 in public money for doing stuff in private with the current Prime Minister. This was apparently for ” technology lessons ” although Arcuri apparently told a friend that she had ” Boris bruises ” on her thighs and breasts. Maybe someone got their wires crossed.

Unfortunately we have no birthday for Arcuri apart from the fact that she was born in 1985.

Also we have no birthdate available for Porkie the Bullingdon club pig, which is a real shame because a spot of synastry would surely be very revealing.

Still no matter. Capricorn Research is not put off by such things.

Even if all we know about Jennifer Arcuri is that she was born in 1985, that still means that her Pluto is conjunct Johnson’s Scorpio Moon. Along with everyone else born in 1983 – 85.

Perhaps we should just say that anyone born during these years is fair game.

Ernestine, the world’s oldest pig must be relieved that he was born in 1991, although to be fair, Boris has not shown that much interest in live ones yet.

Maybe to stop this apex 8th house Mars, Scorpio Moon hooligan destroying what is left of the UK, we should get everyone born with Pluto at the beginning of Scorpio to shag him.

My favourite would be Wayne Rooney. He likes doing it with old people anyway and has the Sun conjunct Pluto exactly on Boris’ Moon.

Shrek might have broken the record caps for England but his true calling awaits.