One reasonable question often raised by sceptics – is there any single astrological placing that will always have the same or a similar effect for everyone that has it ?

This is difficult to answer because each of us are the product of our whole chart, the interplay of many different permutations, but if there is one that is pretty much guaranteed to have an effect on its own it is the Moon in Cancer.

I would be prepared to say that whatever else there is in the person’s chart, anyone with this Moon would find that issues around their family become a major theme in their life, much more so than for the average person.

What issues in particular will depend on many other things, not least the house position of the Moon and the aspects it receives from the other planets.

A couple of weeks ago I decided to have a fresh look at my file of 545 timed charts of murderers. The initial reason for this was to look for possible astrological links between murderers and their victims.

So I am working through them alphabetically.

This article is the 3rd one.

The first two revealed clear and powerful connections between the two.

As well as that, both murderers had strong Pluto contacts with their lights and the murders were committed under transits of the same planet.

Another fascinating pattern shows that the sign positions of the murderers lights points to something about the style of killing involved.

The next one on the list is that of Jacques Allaire. 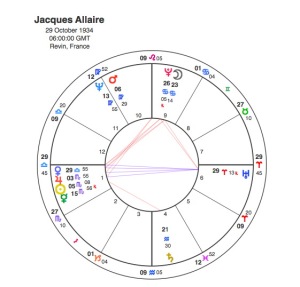 Jacque Allaire was born with a 1st house stellium ( multiple conjunction of planets ) in Scorpio. Technically Venus and the Ascendant are in Libra but anything in the final minutes of a sign are considered to be in the following one.

This stellium is opposite Uranus on the cusp of the 7th house and this opposition points to tremendous volatility in relationships with sudden unexpected and disruptive behaviour. The Sun opposite Uranus adds a strong wilful and stubborn streak to Allaire.

The tension in this powerful opposition focuses by T Square onto the Moon / Pluto conjunction in Cancer.

This points to an explosive release of tension through a powerful act ( T Square ) involving Allaire’s family and particularly children ( Moon in Cancer ) which is likely to result in death ( Pluto ).

I could find only one piece of information about Allaire. He killed both his son and grandson in July 1987. No background and reasons are given.

So once again the planet and sign indicating the act, points to the type of murder committed.

In July 1987 Pluto was at 7 degrees Scorpio, having just passed the conjunction to his Sun, but close enough to still have an affect. Pluto had been in the stellium from 1983 to 86 so we can only guess at the horrendous pressures that lead to this terrible result.

Because there is no more information about this horrific event we can only speculate.

Maybe Jacques committed the killing as some kind of warped act of love for his son and grandson because he thought that living in an imperfect world would be too much for them. Perhaps he was suffering from a severe psychological disturbance at the time.

Or maybe it was just a vicious, brutal, heartless murder.

Either way it was certainly an apex Moon conjunct Pluto in Cancer type killing.