There always has been a debate in astrological circles about death which has focused on two questions.

1. Is it possible to predict someone’s death with any degree of certainty ?

2. Is it morally acceptable to do so ?

The answer to the first one is that depends on the person’s natal chart.

The answer to the second one is that depends on what they have done with that chart.

In some cases the answer is very definitely yes to both.

The last century has seen many candidates for the title of most evil, Adolf Hitler, Joseph Stalin, Pol Pot. 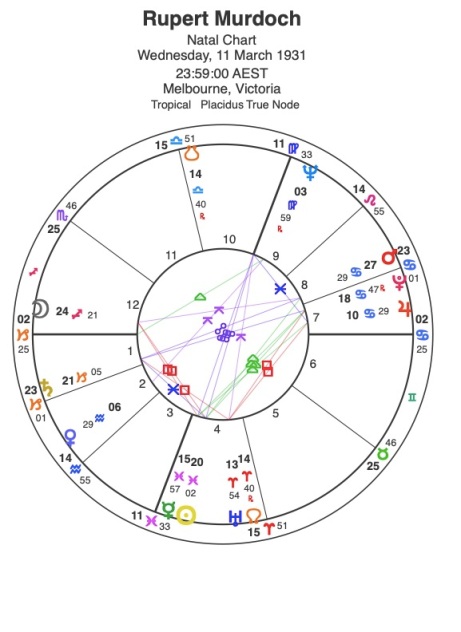 This is not the place for an astrological dissection of Rupert Murdoch’s character.

What I will say is that he shares the Moon in Sagittarius hard aspect to a Mutable Sun with Donald Trump, so there is a similar megalomaniac nutcase feel which hasn’t stopped either man accumulating billions and a following amongst the more educationally challenged people of this world.

The one consolation is that Neptune is about to hit the lights of both of these tyrants so we can watch them both sink without trace.

Whereas with Trump there is fair chance of him being incarcerated in a small cell, Murdoch stands an equally good chance of being stuffed in a much smaller box.

This is down to that Mars in the 8th house conjunct Pluto opposite Saturn.

And Pluto is about to hit this one.

Pluto will be opposite Murdoch’s Mars between March 2021 and Jan 2023.

Neptune will be aspecting his Sun and Moon between now and Mar 2023.

So surely the wizened old git will be departing this Earth sometime then.

So the only remaining question would be is there any chance of saving his soul by then ?

Would some kind of deathbed repentance and giving away all his ill gotten gains save him from being shafted by red hot pokers by an army of goblins for the rest of eternity ?

That would be a no.

So all that remains is to find some tiny positive thing about his life, something that he could claim to have given to aid humanity.

I’ve looked long and hard and found nothing, but they say you should always be compassionate, even in the face of your most hated enemy.

So I have decided to help out here. In order to find some kind of tiny positive from Rupert Murdoch’s life, I am going to use the inevitability of his death to further our understanding of horary astrology.

Some might say this is a misuse of the noble and ancient art.

Some might say that it is not possible or appropriate to ask such questions about a person with whom I have no immediate relationship with.

My feeling with horary is that the chart itself will always reveal whether it is appropriate or not.

And this one certainly does. 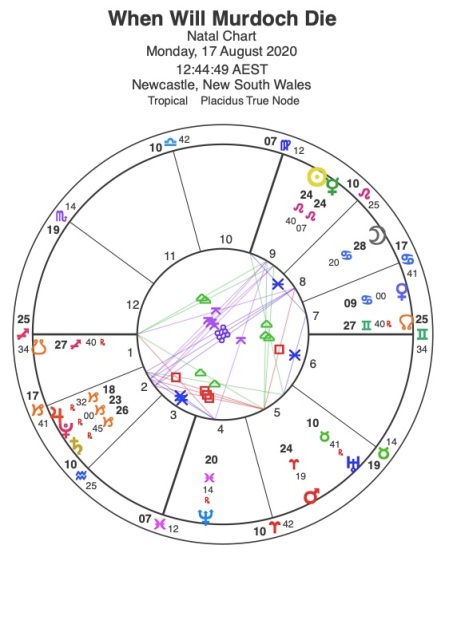 It is very clear this chart is referring to Rupert Murdoch because the Ascendant is 25 Sagittarius, within a degree of the old git’s Moon.

It is also very clear it is about his death because the Moon is in the 8th house.

The Moon is Void of Course. So what does that mean ?

Usually a VOC Moon will mean there is no future in the question.

But we can’t read that to mean he will not die. Of course he will. Under these circumstances a VOC 8th house Moon must mean he does not have much time left.

This is where it gets interesting.

What timing method do we use ?

The planet that signifies Murdoch is Jupiter, in fall in Capricorn and retrograde in the 2nd house.

This must be indicating that his business empire is fading.

Jupiter will soon start going direct again and will then reach a conjunction with Pluto, the planet most associated with death.

Pluto rules the 12th house so maybe there is hospitalisation here.

Or do we take the fact that Jupiter is 4.5 degrees away from Pluto and 1 month per degree would bring us to the New Year ?

Or perhaps it’s the Moon ?

Given that the Moon is the ruler of the 8th and is dignified in the 8th, maybe we should take that as the signifier of Rupert Murdoch’s death.

And given that it has only 1 degree 40 minutes to go in that sign, perhaps that would give us the timing.

If so does it mean he will croak in early October this year ?

My feeling is that the thing that will kill him has already made an appearance due to his Saturn transits this year, but the actual event  will not happen until transit Pluto makes the opposition to his natal Mars.

So if its going to be the Moon in this horary that does for him, we should probably equate 1 degree per year.

Therefore he may well be hospitalised in October or November but he will finally shuffle off this mortal coil about mid April 2022.

His transits then would still have Pluto within a degree of opposition to his Mars but this date would also show both Neptune and Jupiter exactly square to his Moon.

It will be fascinating to watch how these combinations of natal and horary astrology work together over the next few years.

It will be a tremendous opportunity to see the intricacies of astrology timing in action.

Capricorn Research will make sure he has plenty of popcorn supplies.