Politicians are well known for choosing campaign slogans that have a way of coming back to bite them on the bum. One of the most entertaining examples was British Prime Minister John Major’s ” Back to Basics ” campaign in 1993. It was intended as a nostalgic appeal to traditional values full of generic platitudes about families and self-reliance.  It was widely interpreted by the media as including a “family values” component and it subsequently backfired when a succession of Conservative ministers were caught up in a series of scandals.

Major should have known better,  whereas scandals involving Labour MPs were generally financial, those involving the Tories frequently had some kind of sexual component. His own extra maritals with Edwina Currie should have been enough to help him avoid such a campaign, although this did not come to light during his reign as Prime Minister. Judging by the response to his own Cabinet Minister, David Mellor’s little detour from the family values ticket, Major got off very lightly.

Mellor’s role as a politician will not be remembered by many outside his immediate family, but his involvement in a notorious kiss and tell story certainly will. Its very possible that the press had their knives out for him after he was interviewed on a TV programme following the setting up of the controversial Calcutt Committee Inquiring into Press Standards. Mellor claimed  that “the press – the popular press – is drinking in the Last Chance Saloon” and called for curbs on press freedom.

The press got their retaliation when actress Antonia de Sancha sold them a story of Mellor’s extra-marital affair with her. Normally this would have been one of those, here today, gone tomorrow pieces but it was given considerably more exposure due to the fact that Mellor and de Sancha’s phone conversations had been secretly recorded by de Sancha’s landlord, an activity that is now against the law, but then was considered almost normal. De Sancha called it ” emotional rape “.

The notorious publicist Max Clifford got his teeth into the story and produced a number of pieces that de Sancha has said were entirely untrue and a complete invention on Clifford’s part.  The part of Clifford’s invention that proved most popular was the news that Mellor made love wearing his favourite Chelsea football shirt.

It’s important to point out that Capricorn Research’s generation had suffered 13 years of Tory rule at this point and our only way of getting our own back was through entertainment at their expense. This explains the enormous popularity of Spitting Image and also the reason that David Mellor’s away performances in a Chelsea strip drew a much greater tabloid attendance than would have otherwise been the case.

Chelsea FC were probably quite happy though as it provided another avenue for shirt sales and in those dark pre Abramovich days they needed every penny they could get.

Unfortunately the birth times of the actors in this tragi / comedy are not known but noon times suffice to cover the basic themes.

David Mellor was a Sun Pisces, Moon Leo but it is the aspects of these two that really paint the picture.

Mars rules sexual activity and it is in close conjunction with the Sun. These two are in Pisces, a sign known for secrecy and a rather fluid interpretation of life in general, including behaviour in relationship.

The only aspect this conjunction makes is a difficult square to Uranus, the planet that rules the media, in Gemini the sign that rules communication.

Astrology is always very helpful to its followers as it will often repeat the same message just in case we were too dozy to spot it the first time.

Pluto’s energy works mainly underground in the dark, but at a certain point will thrust itself into daily consciousness with a kind of atomic explosiveness, completely destroying everything that had existed before.

Whilst the Sun covers the things that we deliberately, consciously associate ourselves with and will say a lot about our chosen path in life, the Moon is far more likely to reveal our unconscious, instinctive patterns of behaviour. The Sun will be found in our career, the Moon more likely in what politicians refer to as our private life.

So the Moon’s conjunction with Pluto is clearly pointing to where the watershed in David Mellor’s life will occur.

The Moon is opposite Mercury, the planet of communication in Aquarius, the sign of the media. And this Mercury is also opposite Saturn, showing that the media will give him a hell of a lot of trouble.

As these are the only aspects in his chart and they are basically saying the same thing, there can be no doubt about the major theme in his life. Nor by the way, the moment that it would be enacted.

Whenever Pluto is in conjunction with the Sun or Moon, the only transit it will make to that body is a square and it will be by far the most explosive in the person’s life.

Antonia de Sancha’s story came out in 1992. Major supported Mellor through the incident, but Fleet Street maintained the pressure on him and Mellor resigned on 24 September 1992.

Pluto was square Mellor’s Moon and opposite Mercury from 1991 – 4.

Some of the entertainment surrounded the excruciating footage of David Mellor and wife Judith appearing at the garden gate trying to present a united front to the assembled media. Fortunately for Judith, no birth details are available but no doubt she suffered enough humiliation at the time without a detailed examination of her chart adding to her troubles. Antonia de Sancha on the other hand….

De Sancha’s Sun is at 21 degrees 23 Virgo, Mellor’s is at 21. 36 Pisces. They say opposites attract but there’s no need to be quite so exact about it.

Any relationship between people with an opposition between their Suns is going to have a strong degree of challenge involved in it because they would naturally go in very different directions. The closer the opposition, the stronger the tension and greater the likelihood that the relationship will struggle. The attraction could well be initially very strong but the opposing polarities will also find a way of repelling each other.

That the attraction was very strong is backed up by de Sancha’s Venus at 18.34 Leo being exactly conjunct Mellor’s Moon at 19.08 Leo.

De Sancha however, has Venus in square to a Moon / Neptune conjunction in Scorpio, indicating that her choice of relationships ( Venus /  Moon ) have a strong element of idealism and fantasy but the net result is likely to be confusion and an undermining of any sort of emotional security ( Neptune ).

This contact also means that de Sancha’s Moon is in square to Mellor’s Moon. A difficult and challenging aspect between a couple’s Suns or Moons can be ameliorated by easier aspects between the other pair. Hard aspects between both pairs is just looking for trouble.

Another important point about de Sancha’s Venus is that it is conjunct Uranus. Her love life ( Venus ) will be played out in ( conjunct ) the media ( Uranus ).

Synastry, the comparison of charts of people in relationship is a fascinating subject. As well as enabling us to see the themes between the couple, we can also add important planets from one chart to the other in order to see the impact of the relationship on each of their lives.

So David Mellor has a difficult square between his Sun / Mars and Uranus, showing a stressful relationship with the media in general. When we add de Sancha’s Sun into the mix, Mellor’s square aspect is turned into a powerful T Square with an apex of Uranus. So its the relationship with de Sancha that proves to be the tipping point for Mellor.

This is also confirmed by the fact that between 1991 and 94, Pluto is not only transiting as a T Square to Mellor’s Moon and Mercury,  its also square de Sancha’s Venus and Uranus as well.

This was a tough one for Antonia de Sancha and she has had scarcely any work as an actress since the scandal, and considers it the reason a subsequent marriage failed.

It was probably not the major turning point in her life, however which came earlier. She is the daughter of a Spanish film producer father, who died in the mid-1980s, and a Swedish mother who, suffering from severe depression, committed suicide 18 months later. This occurred when Pluto was conjunct her Moon / Neptune between 1986 and 87. The Moon rules the mother and sadly Neptune has rulership over suicide.

In a way there were three people in this relationship and odd man out was media publicist, Max Clifford. 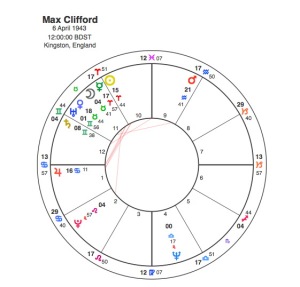 Clifford has an Aries Sun and Taurus Moon, but the interesting thing from the perspective of this article is the square aspect between his Venus at 18.44 Taurus and Mars at 21.41 Aquarius.

Venus and Mars are the two planets that govern sexual relationships and Clifford’s Mars in Aquarius shows how instrumental he is in giving such things plenty of media coverage.

The fact that Clifford’s Mars and Venus threw stressful aspects to Mellor’s Moon / Mercury and de Sancha’s Venus / Uranus show that he would be instrumental in magnifying the differences between them and causing all the trouble.

In the chart of an individual two planets in opposition can be powerfully focused by another planet square to each of them which forms the apex of a T Square.

This can also occur when the opposition is between planets in the charts of a couple in a relationship. The tension between them can be exploited and focused by a planet in a third party’s chart if that planet forms a T Square apex to them.
The opposition between De Sancha’s Venus in Leo and Mellor’s Mercury in Aquarius is drawn towards Clifford’s Venus in Taurus so the troubles between Mellor and de Sancha ( opposition ) proved to be of great advantage to Clifford ( apex his Venus ).

The media exploitation of the affair proved to be an important stepping stone in Clifford’s career, turning him into a major player in the publicity world and the goto person for anyone with a similar kiss and tell story for sale.

Mellor and de Sancha would be forgiven for wanting Clifford to get his comeuppance. Twenty years may feel like a long time to wait but in May 2014, Max Clifford was found guilty of the sexual assault of a number of girls under the age of 16 and was sentenced to 8 years in prison.

Karma always gets you in the end, and because it’s ruled by slow moving Pluto, it takes it’s time. But Pluto finally got there, in square to Clifford’s Sun in 2014, making it the turning point of his life.

Meanwhile if any Tory politicians want to try and get away with a little bit of Back to Basics avoidance, Capricorn Research would be happy to check their charts against any of those of potential mistresses in order to avoid any Mellor type disasters. It is however a well known fact that astrologers don’t get paid enough for their services, so if another Max Clifford came along wanting to dish the astrological dirt…….

2 thoughts on “David Mellor and the Chelsea Strip”