According to a lot of supposedly intelligent people, we live in a chaotic world. They spend their whole lives searching for meaning, but their definition of what constitutes connection is so narrow that they can only conclude that we are being constantly bombarded by utterly meaningless and entirely disconnected events.

Anything that appears to have connectedness but falls outside of their defined boundaries is dismissed as mere coincidence. One of these is the circumstances surrounding the assassinations of Presidents Kennedy and Lincoln.

Both men were elected 100 years apart (Lincoln in 1860, Kennedy in 1960); they were both succeeded by Southerners named Johnson, and the two Johnsons were born 100 years apart (Andrew in 1808, Lyndon in 1908). Both assassins were born 100 years apart (Booth in 1839 and Oswald in 1939) and both died before they could be brought to trial. Lincoln was shot in a theatre and his assassin was cornered in a warehouse, while Kennedy was shot from a warehouse and his assassin was captured in a theatre. Finally, Lincoln was shot in Ford’s theatre, while Kennedy was shot while riding in a Ford Lincoln, and to top it all off, Kennedy had a secretary named Lincoln while Lincoln had a secretary named Kennedy.

Pretty impressive eh ? But any kind of symbolic connection between them, nah.

This is despite the fact that every US President elected in a year ending in zero between 1840 and 1960 died or was killed in office. That’s 7 in a row.

Capricorn Research is tempted to ask what are the chances of that happening. It is certainly a lot smaller than the chances of some scientist coming along to try and persuade us all that it would be a normal occurrence.

But the fact is, it only takes a small knowledge of astrology to know what we are talking about here. There is one planetary cycle of exceptional regularity and that is the Jupiter / Saturn relationship. The conjunction between these two occurs every 20 years. It goes without saying that this occurred in 1841 and every 20 years to 1961 during the 1st year of office of all 7 of these Presidents.

Jupiter and Saturn are the two planets that traditionally have had the strongest impact on Mundane or Political Astrology. Jupiter ruled the king or ruler or leader, Saturn ruled the end of things or death.

When these two giants come together, well its not rocket science. The whole point of Astrology is to make things so simple and plain that even dim witted humans can see the message.

But google this presidential curse and you won’t find any reference to Jupiter and Saturn. What you will find is some nonsense about the “Curse of Tippecanoe”  which derives from an 1811 battle. As governor of the Indiana Territory, William Harrison used questionable tactics in the negotiation of the 1809 Treaty of Fort McHenry with Native Americans, in which they ceded large tracts of land to the U.S. government. The treaty further angered the Shawnee leader Tecumseh, and brought government soldiers and Native Americans to the brink of war in a period known as Tecumseh’s War. Tecumseh and his brother organised a group of Indian tribes designed to resist the westward expansion of the United States. In 1811, Tecumseh’s forces, led by his brother, attacked Harrison’s army in the Battle of Tippecanoe. Tecumseh’s brother Tenskwatawa, known as the Prophet, supposedly set a curse against Harrison and future White House occupants who became president during years with the same end number as Harrison.

This curse was apparently set in motion despite the fact that Harrison would not be elected for almost 30 years after the battle and unless Tenskwatawa was an exceptionally skilled astrologer, there was no reason to suppose that he would become President.

The obvious question would be why not set one on all of them, why spare those not elected in a year zero. Apart from anything else, its fairly unlikely that the Shawnee used the same calendar anyway.

But this is a far more acceptable way of presenting the curse than anything to do with astrology. Of course what people present as the truth and what they secretly believe are not necessarily the same thing at all.

Ronald Reagan elected in 1980, narrowly survived an assassination attempt the following year. His response to this was to get astrologer Joan Quigley on board and from then on his scheduled meetings were arranged by astrological consultation.

Note that Reagan didn’t employ his own Indian Medicine Man to mitigate the effects of the curse, he went straight to the Jupiter / Saturn effect. There’s nothing like a fear for your own neck to make you see things as they are.

Reagan’s 1980 Jupiter / Saturn conjunction occurred in Libra, an Air sign, whilst all of the others since 1840 occurred in Earth.

It may be however, that the appointment of Quigley appeased the symbolic gods of astrology as not only Reagan but also George W Bush in 2000 escaped their tenure with no harm done. Capricorn Research could not possibly comment about this apart from perhaps to suggest that the rest of the world did not come out of it so lightly.

As Joan Quigley has just recently died there have been a number of articles published about her time at the White House and the powerful influence that she had. Some have said that she encouraged Reagan to look favourably on Gorbachev, an outcome Capricorn Research believes ended the threat of a 3rd World War.

From our own narrow perspective the Universe does appear to move in a mysterious way. Perhaps the powers that be had observed the American people and realised that at some point they would be daft enough to elect as President a has been old actor most famous for playing a support role to a chimp.

Recognising that equipping the most powerful nation on Earth with such an idiot as leader would inevitably put at risk the peace of the planet, it was resolved to keep on bumping them off until they begged for astrological guidance.

But whatever way you look at it, the idea of coincidence is already looking to be on shaky ground. So when the remarkable series of connections that arise with regards to the Lincoln / Kennedy assassinations, perhaps we should look a bit deeper. 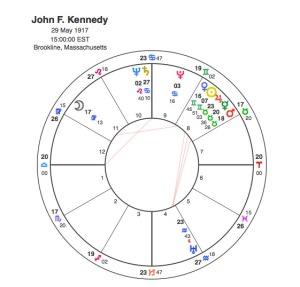 It’s true that both JFK and Abe Lincoln had the Suns in Air signs and Moons in Earth but that’s not really what we are talking about.

The point in a chart that signifies the peak of their career or the highest office in the land is at the very top, the Midheaven.

Both Kennedy and Lincoln have a Saturn / Neptune conjunction there. Saturn as we know signifies endings and Neptune rules the mysterious and unexplained. For politicians Neptune is invariably a negative feature and it’s placing around the Midheaven usually points to a fall from office.

Death is traditionally ruled by the 8th house and which is very frequently tenanted when the individual’s method of shuffling off this mortal coil is unusual or symbolic.

This certainly seems to be the case for JFK who has no fewer than 5 planets in the 8th. This seems very fitting for someone whose death prompted most people on the planet to ask ” where were you when you heard the news ” and is still the subject of the most vivid conspiracy theories over 50 years later.

Amongst his stellium in the 8th JFK has Mars, certainly an indication of a violent or at least sudden accidental death.

And of course Abe Lincoln also has Mars in the 8th.

Both of them have Mars in aspect to their Moons, JFK by trine, Lincoln by square.

But the most intriguing thing is that the moment of their deaths brought together these two themes of Saturn / Midheaven and Mars in the 8th.

The why question is always unanswerable in astrology. Why were Kennedy and Lincoln assassinated ? Who knows, perhaps the Universe took a fancy to their vice presidents at the time and  recognised that both incumbents would win a 2nd election, so decided the only way to engineer this would be to bump off the men in charge.

It does seem that both the Johnson boys were fated to benefit from the death of their predecessors. 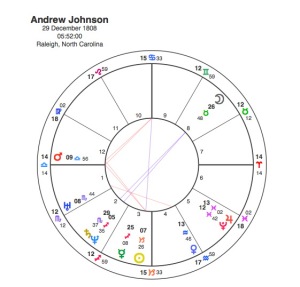 Interestingly we again have a similarity of character. Just like Lincoln and Kennedy, both Andrew and Lyndon Johnson had their Suns and Moons in the same element ( Earth ).

That Saturn / Neptune combination that did for Abe and JFK’s careers was there in both Johnsons’ charts aspecting the 8th house.

In Andrew’s chart Saturn and Neptune were conjunct opposing the 8th house Moon. In Lyndon’s they were in square with Saturn in the 8th itself.

At the time of taking office Andrew Johnson had Uranus opposite his Mercury.

So what about the assassins then ?

John Wilkes Booth had the perfect chart for an assassin. His Sun was opposite Saturn and this opposition lined up with the cusp of the 8th house. Not only that but it was square to Lincoln’s Sun.

Saturn was exactly conjunct Booth’s Ascendant at the time.

Lee Harvey Oswald also had his Sun opposite Saturn. This opposition was in square to JFK’s Midheaven.

Also Saturn was only 6 degrees past Oswald’s 8th house Mars at the time of JFK’s death.

Of course many conspiracy theories suggest that it wasn’t Oswald that killed JFK. Capricorn Research is quite open to that as a possibility but would need to be presented with the chart of another suspect before changing the narrative.

Unfortunately we don’t have the birth data for Lincoln and Kennedy’s secretaries or the dates of the opening of the Ford Theatre or the manufacture of the Ford Lincoln.

But you have to admit that the astrological connections between John F Kennedy and Abraham Lincoln are impressive.

The question of who killed who and why has kept conspiracy theorists busy for decades. But the real conspiracy is the extent to which the powers that be will go to cover up the obvious astrological explanation of these phenomena.

So many things are dismissed as mere coincidence, in fact this happens so often that it can’t be just a coincidence.

2 thoughts on “Coincidence ? – The Greatest Conspiracy Theory of All”