For the first time in history, the Mayor of London will not be one of the city’s own.

But anyone worried that Capricorn Research has been taken over by the BNP, I must stress that I am talking about Zodiac signs.

London is known to be ruled by Gemini. According to William Lilly it is associated with 14 degrees of that sign. And he must have known because he used that degree to accurately predict the Great Fire in 1666.

Ever since the elected position of Mayor started in 2000, the office has been split between two people, Ken Livingstone and Boris Johnson, both having the Sun in Gemini.

Although we don’t have the birth details of Dick Whittington of nursery rhyme fame, it was obvious that he was also a Gemini because he kept turning back and changing his mind.

In fact Richard Whittington was a real mayor of London appointed by Richard 11 in June 1397. Within days of taking office Whittington had negotiated with the King a deal in which the city bought back its liberties for £10,000 (nearly £4m today), and he was reelected by a grateful populace on 13 October 1397.

Not only was it likely that the Sun was in the sign in June 1397 but there was also a Neptune / Pluto conjunction at the beginning of Gemini. For once, Capricorn Research can’t be bothered to look up when this last occurred, but believes it was probably long before London ( or maybe even mankind ) was invented.

And on Oct 13th, that Neptune / Pluto was opposed by a Mars / Saturn / Uranus conjunction in Sagittarius, a suitable astrological depiction of freedom in the city of London.

The first election in 2000 did not get off to a great start as the Conservative candidate Jeffrey Archer was forced to stand down when a newspaper printed a story accusing him of committing perjury during a 1987 libel trial which concerned his dalliance with a prostitute. He was later convicted and imprisoned. 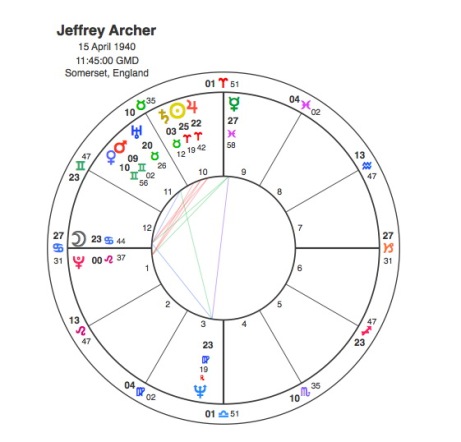 Archer’s chart shows both his spectacular rise and fall.

The Sun in Aries in the 10th house shows someone who is determined to get to the very top, and the close conjunction with Jupiter indicates that he would get there. However the Sun is also conjunct Saturn.

This harder they come, the harder they fall motif is reinforced with the Sun being in square to the Moon and Ascendant both conjunct Pluto.

Archer’s chart contains a close Venus and Mars conjunction in Gemini in the 11th house of politics suggesting he might have made a good mayor of London but Pluto was opposite these two in 1999 forcing him to step down to please her majesty.

Norris has the Sun in Gemini so that works.

Another Gemini Sun, Ken Livingstone had sought the Labour Party nomination but was defeated by Frank Dobson. He described the result as “tainted” because the election system gave greater weight to the votes of London Labour MPs rather than rank-and-file party members, and decided to contest the election as an Independent candidate. On handing in nomination papers he was automatically expelled from the Labour Party. 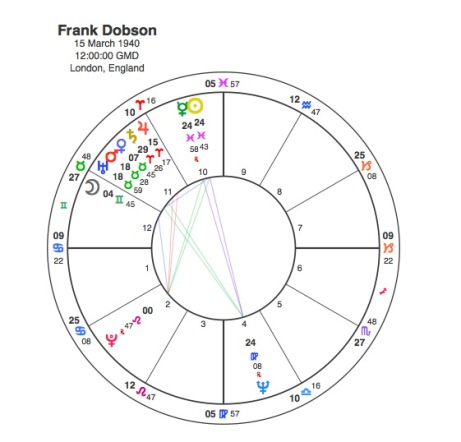 Fascinatingly Dobson has the Sun at 25 Pisces in exact square to Livingstone’s Gemini Sun and opposite his Virgo Moon. Dobson also has the Sun opposite Neptune which is not the kind of thing that would propel you to high office.

Jupiter was conjunct Dobson’s Mars as London went to the polls but unfortunately so was Saturn and the official Labour party candidate finished a distant 3rd.

Interestingly Livingstone and Norris were born within a few weeks of each other and shared many of the slower moving transits.

Although we don’t have birth times the likelihood is that Neptune was square to Norris’ Moon meaning that he was bound to lose this contest of the Geminis.

Livingstone gained Labour’s nomination in January 2004, three weeks after being re-admitted the party. Again he was up against Norris.

Both men had Saturn and Jupiter Returns that year but Ken’s Jupiter was more significant because it was conjunct his Moon and square to his Sun.

However 2006 – 7 saw Livingstone going through a Pluto opposite Sun square Moon watershed transit.

This is the kind of development that always brings sudden unexpected change. It can propel a relatively unknown figure to high office but if someone has been there a while and well and truly got their feet under the table its likely to cause a shock by booting them out. Particularly if their opponent has the same thing.

Boris Johnson is of course another Gemini, but his Sun is at 28.27 degrees, almost 3 later than Livingstone’s. So Pluto was opposite his Sun in 2008 when he became mayor. And the children’s TV programme stereotype of confused, bumbling and out of touch old man wearing a gold chain came true.

In 2012 the same two Twins were at it again and if the election had been held earlier in the year, Ken might have got his revenge as Jupiter was conjunct his Mars and Venus. However between April and June, Jupiter returned to its natal place in Boris’ chart and made a conjunction with his Mars.

For this year both of them have decided to fight other battles and so the mayoral contest is between Labour’s Sadiq Khan and Conservative’s Zac Goldsmith. 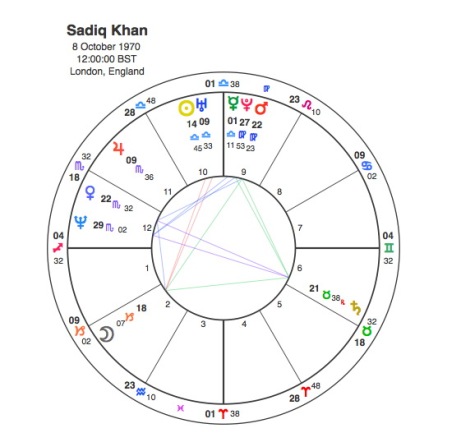 Not a Gemini in sight. But with Pluto square to Khan’s Sun and quite possibly conjunct his Moon as well, it looks like a Labour victory.

Jupiter will also be moving through Khan’s Virgo / Libra stellium over the next year so you would expect that to coincide with carrying a gold chain around.

This election has been marred with all kinds of racist allusions, and some people have even asked whether the accusations of anti semitism aimed at Labour have been part of a campaign to affect the outcome of this election.

This would certainly fit with Lilly’s claim that 14 Gemini is London, because Saturn in Sagittarius which has been doing its bit for hatred of foreigners and waves of anti immigration sentiment, is opposite that degree now.

But it won’t be won by a Gemini this time unless Boris has a change of heart and campaigns on an independent We Hate Europeans platform. Or Ken stands on an At Least they’re not Jews ticket.