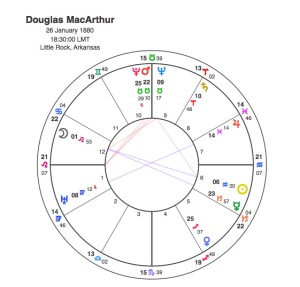 Douglas MaArthur was an American general, the Supreme Commander of the Allied forces in the Pacific during World War 2. He received the Japanese surrender, oversaw the occupation of that country and also conducted operations during the Korean war. MacArthur has the Sun in Aquarius and the Moon and Ascendant in Leo.

Capricorn Research has a collection 457 charts of members of the armed forces, the majority of whom were military leaders. The most common sun sign is Aquarius with a score of 51, 34 % above expectation. Aquarius can give a clear, cool head under fire and the ability to stay detached and make logical decisions even under the most extreme pressure. The Moon in Leo gives a natural authority and an instinctive ability to lead others which is obviously reinforced by the Leo Ascendant. One of the most common aspects in the armed forces group is the Sun / Moon opposition with 33, and 9 of these run across the 6th and 12th houses, more than twice the expected number.  A Sun / Moon opposition creates a strong pull in two different directions but it can also lead to the ability to see things from different angles and can create an excellent strategist.

A conjunction between Mars and Pluto invariably creates a fighter and this aspect scores 38 % above expectation in the armed forces group, an almost identically high score to that of a collection of 239 boxers. MacArthur has this aspect right at the top of the chart in the 10th house and conjunct the Midheaven. Planets in this position point to themes that have to be expressed through the career. This Sun / Moon / Ascendant combination together with the elevated Mars / Pluto conjunction paints an appropriate picture of the man who became the Supreme Commander in the Pacific. It’s the type of chart you’d expect for the leader of the Jedi in Star Wars.

Pluto’s slow movement through the signs of the Zodiac means that it takes up to 20 or more years to travel through any one sign and its sign position says a lot about the major global themes of a whole generation. Pluto first reached Leo in 1937 and remained there until 1957 a period which covered World War 2, the aftermath and eventual global recovery and prosperity. There is often a pattern of great crisis during Pluto’s passage through the first half of a sign, followed by a sudden development about midway with the establishment of completely new conditions during the 2nd half, in other words a typically Plutonian experience from the planet of death and rebirth.  World War 2 began in 1939 in Pluto’s first full year in Leo and ended with the planet at 10 degrees of that sign. Many individuals who played a major role in the war had important planets in early Leo which were being triggered by Pluto’s transits at the time.

As Pluto takes about 250 years to travel round the Zodiac at least half of humanity will never experience a Pluto / Sun conjunction, their version would be the opposition. Douglas MacArthur had Pluto opposite his Sun from 1942 to 1944 and given the US did not enter the war until 1941, this was obviously the watershed period of his life. the ground had been prepared however as Pluto was conjunct MacArthur’s Moon from 1939 to 41.

MacArthur remained in Asia after the war to manage the Japanese occupation and also to take charge of the Korean War. When the Chinese invaded Korea and took Seoul, MacArthur and US President, Harry Truman were faced with the prospect of abandoning the country. The US army regained Korea but Truman was believed to be looking for a way out of the war with a negotiated settlement, an option that had to be shelved possibly due to statements that MacArthur made about China that were off message. Harry Truman’s Moon is at 5 degrees Scorpio creating a T Square with MacArthur’s Sun / Moon opposition showing an obvious tension in the relationship between them.  Truman’s Sun is conjunct MacArthur’s Mars and Midheaven showing the power the President had over his career, as Truman relieved him of his command in 1951. MacArthur however, was a very charismatic figure and there was general public disagreement with the decision and Truman who was already unpopular saw his rating sink to the lowest ever for a US President.

There were expectations that MacArthur might run for President in 1952 but he declined, endorsing Howard Taft who lost to Eisenhower. Pluto was square to MacArthur’s Mars from 1951-4 and its most appropriate that the great military career indicated by the natal conjunction of these two planets came to an end with the only transit that they could make during his lifetime. Pluto was also conjunct Truman’s Mars and square his Sun and the decision to remove MacArthur was one of the last acts of his presidency.

With its powerful placing on his Sun / Moon opposition during World War 2, Pluto was Douglas MacArthur’s Supreme Commander.