It maybe a sad indictment of human beings but the love lives of the stars of stage and screen have always attracted more attention than anything else. Despite the fact that they worship these people, the one thing everyone wants to watch more than anything else is when their ” perfect ” relationships unravel. They may have more money than the rest of us can dream of but it is a consolation to know that it can’t but you love.

Whether its Tom Cruise and Katie Holmes, Paul McCartney and Heather Mills, Madonna and Guy Ritchie or going back a little way Elizabeth Taylor and Richard Burton, the things that constantly sells magazines is when a celebrity marriage falls apart. But surely none would have sold more than the Jennifer Aniston, Brad Pitt, Angelina Jolie affair.

Its probably true that more astrological pontificating has been published on this issue than any other in the history of the subject but this won’t stop Capricorn Research adding his tuppence worth, and true to the sign it will be done almost 10 years after the main event.

So the question on the mind of most men is how does someone as wooden as Brad Pitt get to be married to two of the sexiest women around ?

Well the macho Sun rising in Sagittarius is good for a start.

The Moon exactly conjunct Venus is a winner in any sign and the fact that its in Capricorn does give off a certain cool, but it seems that the real draw is the tight Mars / Jupiter square 9 – 10 degrees Capricorn / Aries.

When looking for the themes for someone’s love life, the simplest place to go is to Venus and Mars and also perhaps the Moon.

Jennifer Aniston has her Moon in Sagittarius and her ruling planet Venus opposite Jupiter so she would naturally be drawn to these types. Whats more Venus is opposite Uranus and the Moon is square to Pluto so there will be plenty of changes, even explosive and disruptive ones, in her love life.

Her Mars is in Scorpio conjunct Neptune, a fairly classic placing for a sex symbol who is the object of many male fantasies. It can also suggest an idealistic and perhaps unrealistic approach to relationships and the fact that it is square to her Sun indicates that it will give her a lot of challenges in this area of her life.

Aniston’s Moon is conjunct Pitt’s Sun. Her Venus is at 9 degrees Aries exactly conjunct his Jupiter and square his Mars.

Jennifer and Brad first met in 1998 and married in 2000 so naturally we would expect her Venus and his Jupiter to be harmoniously linked at this point. Pluto was at 9 – 10 Sagittarius casting a easy flowing trine aspect. It was also conjunct Pitt’s Ascendant in 2000.

For a few years, their marriage was considered the rare Hollywood success.

When two people who have such close aspects come together in a relationship, the effect of transits is doubled because they will hit both of them at the same time.

Given that Aniston has a close Moon / Pluto square we would expect the predicted upheaval to occur when Pluto makes its conjunction to the Moon. This happened in 2005, the transit became exact in January the very week they announced their separation.  A divorce was finalized on October 2, 2005 with Pluto conjunct Pitt’s Sun.

During this period there was intense speculation in the media that Pitt had been unfaithful to Aniston with his ” Mr. & Mrs. Smith ” co-star, Angelina Jolie, a fact that Brad denies but he does admit to falling in love with her whilst on set. 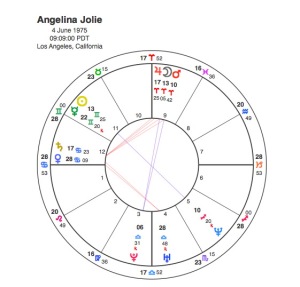 Angelina also has a powerful chart as a sex symbol. She has Venus exactly on the Ascendant with the Moon conjunct Mars and Jupiter in Aries.

Her Mars is closely square to Brad’s Mars. Her Moon, Mars, Jupiter are square his Moon, Mars, Mercury, Venus. This combination not only shows a powerful attraction but also depicts their roles in the film.

Angelina’s Sun is opposite Neptune and this falls exactly on Pitt’s Ascendant, so for him she would be the woman of his dreams.

There was a suggestion that one factor causing the break up of Brad and Jennifer was that he wanted a family and she wasn’t ready for that. That being the case Angelina’s Venus in Cancer on the Ascendant would naturally draw him and they now have 6 children.

For all that double Sagittarian desire for freedom, Brad Pitt has the Moon conjunct Venus in Capricorn so his instincts would be to settle into a conventional family unit.

It will be interesting to see how things develop for the Brangelina brand as Pluto is currently square to her Moon. If there are any developments, Capricorn research promises not to wait 10 years to report on it.

5 thoughts on “Aniston, Pitt and Jolie – The Transit of Pluto”