Top Gear is the TV version of Marmite, you either love it or hate it. It’s very likely that these divisions fall closely along gender lines, as the motoring series panders largely to boys who may have grown up but still harbour a place in their hearts for all the banter, insults and simplistic certainties of their 8 year old selves.

The show has a simple format that has barely changed at all in 13 years, but the excitable, slightly controversial and occasionally politically incorrect flavour certainly taps into something as it is the most widely watched factual television programme in the world.

Top Gear began as a conventional motoring programme in 1977 but it faced the axe because it had become too boring so it was revamped in 2002.

The excitement, the assertiveness of the presenters, the childlike simplicity and view of the world in black and white conjures up the image of one sign only and thats without taking into account that its all about racing cars.

Aries has always been associated with Motor Racing, a link confirmed by Capricorn Research’s sample of 106 Racing Drivers – see Aries is the Fastest Sign. So we would expect it to play a major part in the chart for Top Gear. 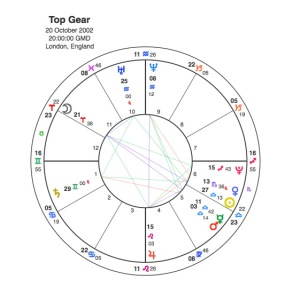 When it comes to charts of TV shows, the Sun sign is not as significant as in an individual’s birth chart. One main reason for this is that series are unusually introduced for a season and as a result tend to start at particular times of year.

The sign of the Moon or any other major planets tends to be more important but the aspects that the Sun makes will have a lot to say about the nature of the programme.

The Top Gear Sun is opposite the Moon in Aries. As the Moon rules childhood, the fact that it is in this sign probably says more about the boyhood dreams of everyone involved.

As the Sun and Moon are in opposition we can see the challenging nature of the programme, but Top Gear is not at all subversive.

This is clear from the fact that the Sun / Moon opposition is part of a Kite formation including a Grand Trine with Uranus and Saturn.

With the Sun, Saturn and Uranus working in such Air sign harmony, Top Gear manages to tick the controversy box ( Sun trine Uranus ) without causing any offence to anyone in authority ( Sun trine Saturn ).

The Grand Trine also accounts for the show’s phenomenal success.

Top Gear has had the same 3 presenters for over a decade, but it is without question the vehicle for one man. 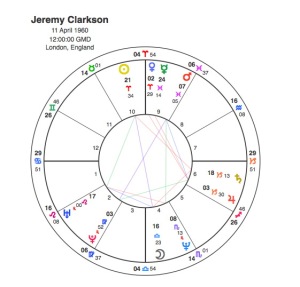 The fact that Top Gear is Clarkson is clearly shown by the repetition of the Aries / Libra, Sun / Moon combination.

Of course in natal charts the sign position of the Sun is considerably more significant than that of the Moon and the egocentric, boorishly assertive Clarkson would have to be an Aries Sun.

It is true this is only a noon chart so we cannot be sure of the exact placing of the Moon, but Capricorn Research has frequently found that in cases where no birth time is available, the exact noon positions work supremely well.

Certainly it does in this case as Clarkson’s Sun is at 21 degrees 34 Aries a mere 4 minutes from the Top Gear Moon.

He also shares the Sun in trine to Uranus although its not part of a Grand Trine here. Clarkson’s Sun does make an aspect to Saturn but it is a tough square, creating the apex of a T Square with his Moon.

Whilst the programme itself is seen as entertaining and relatively harmless, its the character of Jeremy Clarkson that draws all the opprobrium.

Clarkson writes a regular column in the Sun newspaper and portrays himself as a right wing libertarian although there is a strong sense that the whole character is created largely and deliberately for effect. He has been called a racist and a bigot, and has certainly managed to offend large numbers of people for his ethnic stereotyping.

There is a sense that he enjoys the controversy and deliberately says things to provoke a reaction in a typically Arien way. But as the Sun and Moon are square to the apex Saturn, its inevitable that a lot of trouble would be caused, particularly when triggered by powerful transits.

In March 2015, with Pluto square to his Moon, Clarkson was dismissed from the show for punching a producer over a catering dispute.

Over the next couple of years, Uranus is conjunct Clarkson’s Sun so the likelihood is that we will see a reinvention of his career but Pluto will also be square his Moon so there will be more stressful episodes running in tandem.

Jeremy Clarkson’s partner in crime is the ” Hamster “, Richard Hammond 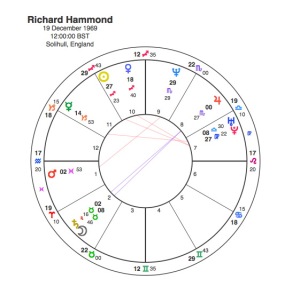 Hammond’s Sun is at 27 degrees Sagittarius in exact trine aspect to the Top Gear Sun.

The standout aspect in Richard Hammond’s chart is an exact square between the Sun and Pluto. This is so close that the noon chart places them only 1 minute apart.

As a Sagittarius, Hammond would be constantly wanting to push and break boundaries. With the Sun square to Pluto these urges would carry such an intensity as to even threaten his own life. For someone involved in motor racing to have an aspect such as this, a serious driving accident should be expected.

In so many cases in these articles, when someone has a Sun / Pluto aspect a sudden, dramatic, life changing incident occurs when Pluto makes the only transit of their lifetime to their Sun.

In September 2006, Hammond was in a crash of a jet-powered car he was driving at a speed of  288 mph. Some accounts suggested that the accident occurred during an attempt to break the British land speed record.

Hammond was seriously injured an in a coma for two weeks.

He recovered and returned to the Top Gear in January 2007 with Pluto exactly conjunct his Sun. The accident had taken its toll, however and in a later interview he described the effects of his brain injuries and the progression of his recovery. He reported suffering loss of memory, depression and difficulties with emotional experiences, for which he was consulting a psychiatrist.

James May is the 3rd member of the Top Gear team. May tends to play the role as the straight man of the series and is  referred to by the others as ” Captain Slow ” a perfect moniker for someone with the Sun in Capricorn. 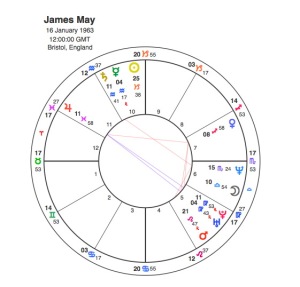 It may be that personality wise, May is different from the other two and even from the general thrust of the series, but he is an important part of Top Gear as shown by the fact that his Sun is square to both the Sun and Moon in the chart for the programme.

May also has the Moon in Libra conjunct that of Clarkson.

As a result of Jeremy Clarkson’s sacking, all three have left Top Gear, Hammond and May feeling it would not be appropriate to continue.

So what is the future for the show ?

Just as Uranus coming to conjunct Clarkson’s Sun suggests reinvention, it is also approaching the Top Gear Moon, so there will be a continuation of some sort, possibly with a new format.

It may well be that the show will continue until Pluto squares its Moon in 2018 – 19.

There will be new presenters obviously, but from a look at the chart of the one chosen so far, the show is unlikely to lose its Arien quality. 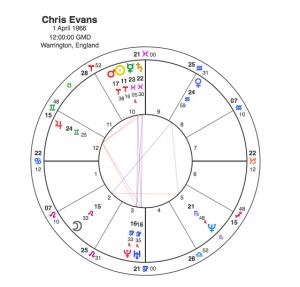 Radio show host Chris Evans has been linked with the show since Clarkson’s sacking. Evans has the Sun conjunct a powerful Mars in Aries.

Uranus went over Evans Mars in the Spring and will do so again this Autumn. Pluto is also about to square his Mars next year.

So will Top Gear be going into reverse ? Obviously we would need to see the charts of any other presenters, but a look at Chris Evans transits suggests right foot hard down on the accelerator.