Capricorn Research has long been a fan of using the Contest Chart to predict the result of football matches.

This system does not work with any old match, it has to be something unique and of global significance. It works quite well with cup finals but its in the area of international tournaments that it really comes into its own.

For the 2014 World Cup, I examined every chart and made a prediction for each game. For the matches that I felt really confident about, I placed small wagers at the bookies and came away from the tournament with a much healthier bank balance. The results of these predictions are here – How to Predict Football Matches.

I have attempted to apply the same criterion to cricket and have been reasonably successful. Again its important to note that the games considered have to be of global significance, so we are talking about major test playing nations, not a twenty twenty between Bangladesh and Sri Lanka.

But a recent review of the method has caused me to have a slight rethink.

Test cricket is different from football.

With football charts its best to take the Ascendant and its ruler to signify the favourite and the Descendant for the underdog.

In most cases this would work out the same anyway because the home side in cricket is usually the favourite, due to the massive advantage caused by the state of the pitches, which can be tailored by the groundsmen and also the weather and cloud conditions which the home side are suited to.

The other important difference is that football matches last for 90 minutes, or maybe 120 in a tournament. If the result is tied that game will be decided in the most dramatic way possible with a penalty shoot out.

A cricket test match lasts the best part of 5 days, and even after this there’s a reasonable chance of both teams shaking hands on a draw.

So the relatively short game of football would be decided by the Moon’s next aspect, and the closer it is, the more significant the victory.

In a test match the Moon has plenty of time to not only complete any aspects but to progress through another couple of signs as well. So perhaps we should not be so hasty to take its first aspect to a significator is being the primary one.

Take the recent series between South Africa and England. I got off to a bad start with my predictions for this series. England after all are notoriously poor travellers and had just come away from a disappointing loss to Pakistan in the UAE. South Africa had also lost badly in India, but they were the home side and also no 1 in the world.

So when I quickly looked at this chart, I assumed it would be a home win.

The Moon is applying square to Jupiter for South Africa so I felt this would be a simple home win.

However the Moon goes on to oppose Mercury for England and England won convincingly.

The chart for the 2nd test shows the Moon making no aspect to either Jupiter or Mercury which is appropriate because it was in fact a draw.

The 3rd test chart is very similar to the 1st one as the Moon applies first to an aspect ( opposition ) to Jupiter for South Africa but then goes on to sextile Mercury for England.

This game was too close to call for a long time until Stuart Broad had one of those unbelievable spells of bowling taking 5 wickets for 1 run as England beat South Africa by 7 wickets.

So England won two tests and the series as a result of the Moon’s 2nd aspect to a significator.

And it seems that if the Moon applies to both significators, the later one is the important one in this form of cricket.

Test cricket is a very odd game in many ways. It seems that the powers that be in the cricketing world make no effort at all to encourage more people to watch the game. In fact they do their damnedest to try and put them off.

These days where most people’s attention span seems to peter out at about 5 seconds, cricket expects people to stay put for 5 days.

As I’ve already mentioned, matches often end in a draw which can’t be satisfying for the watching public.

The slightest drop of rain and everyone comes off the pitch and in some countries that could mean there is no play for hours or even days. But the most absurd thing is the also give up playing for bad light despite the fact that all the major grounds have floodlights.

Cricket’s organisers also refuse to arrange the sport in a proper competitive way by having a test league with promotion and relegation to ensure that every match counts. They seem to believe that a tour to a particular country is an end in itself, with no reference whatsoever to where the result leaves either side in the overall scheme of things.

So we frequently get a situation like the one in South Africa where one team has already won a series before its finished and the final match is simply a lame duck.

No doubt everyone believes that the victors will play just as competitively in the final game simply for the good of the sport, but this is just a nonsense.

At the top level of all sport, everyone agrees that its mostly played in the mind and the difference between winning and losing is about 5 % of extra energy and focus and determination that one side brings to the table.

So once Stuart Broad has taken his 5 wickets for 1 run and the whole side have had their celebrations for winning the series, the cricketing authorities presumably expect the world’s top bowler to just go out there and do it again. Its utterly absurd.

Broad took 3 wickets for 124 runs in 2 innings as South Africa won easily. Because there was no motivation to access that extra 5 %, England were mentally on their way home, despite what anyone says should be the case.

Unfortunately this type of thing messes up the astrology as well. 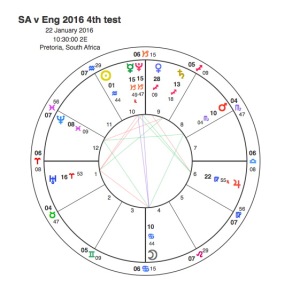 The Moon makes no applying aspect to Mars for South Africa or Venus for England.

However the Moon is separating from a trine to Mars, which as a rule would mean the match would be going away from South Africa. Under normal circumstances this would be a reasonable indicator of an England win.

But a chart is symbolic of the whole situation and so despite their win in the 4th test, this home series has gone away from the home side. This fact is quite neatly summed up by the Moon in Cancer separating from a trine to Mars for South Africa.

So to conclude, the contest chart applies very well to test cricket as long as we remember to play the long game.

And also if the powers that be can’t be bothered to come up with a format that makes the final match competitive, don’t expect the Universe to waste its time trying to predict it.