Its a phrase that’s been attributed to many sources from the Bible to the Guinness advert and an experience shared by most Capricorns. But anyone with the Sun in aspect with Saturn would be familiar with it. The ringed planet brings delays, obstructions and frustration but all these things are sent to try us, to make us develop faith, patience and discipline. If we are prepared to play the long game, real success will be ours in the end and it will taste all the sweeter for the sacrifices made on the path.

This is how Caroline Wozniacki must be feeling today as after 7 years of trying since her first Grand Slam Final, she dragged herself over the winning line in a tension racked match against Simona Halep in Melbourne. 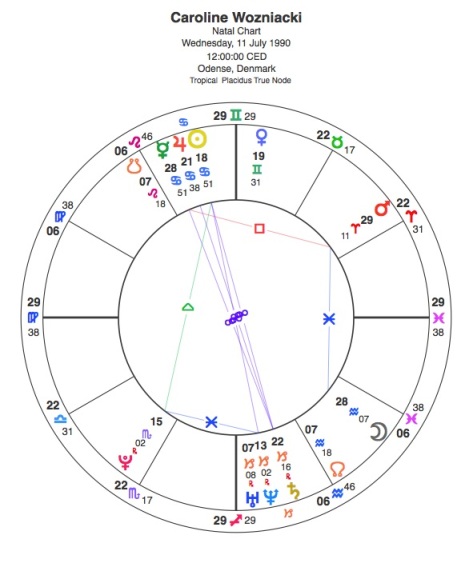 With the Sun conjunct an exalted Jupiter in Cancer, there was never a doubt that she would be a winner, but that opposition to a powerful Saturn in its own sign meant that she would have to suffer on route.

This is the way with oppositions, you get both types of experience in your life. And you can’t get much more opposite than Jupiter and Saturn.

Wozniacki’s Sun is also opposite Neptune so there must have been times of self doubt, but with Mars in the final degree of Aries she would always fight to the bitter end.

An opposition points to tension in a life but this can be eased by another planet in trine and sextile to both ends. Wozniacki has such a planet, the all powerful Pluto in its own domain, Scorpio.

So when would all this waiting end ?

The answer is simple, when Pluto came into aspect with the Sun.

So with Pluto at 19 degrees Capricorn making its first and quite possibly only major transit of her life to Wozniacki’s Sun, she finally hit the winner.

Just to make sure Jupiter was also trine her Sun.

Her natal opposition held out as long as possible taking an emotional final between two exhausted and injured players to 3 sets, but in the end Saturn actually did for her opponent. 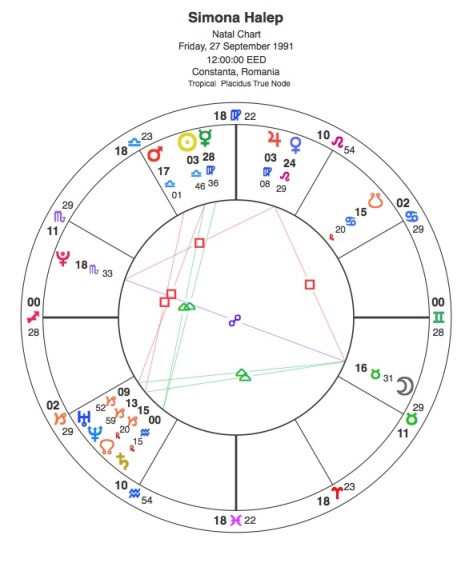 Although she fought remarkably hard throughout the match and the tournament, Simona Halep was never going to win in the end. Saturn is at 4 degrees Capricorn in square to her Libra Sun.

For Halep, the wait goes on. To find out how long you have to follow Capricorn Research.

After all I did back Caroline Wozniacki to win this tournament before it started, and like any true native of the sign I’m happy playing the long game.

Everything comes to those who wait, but if you don’t want to why not  Get Ahead of the Game – Sports Predictions in Advance