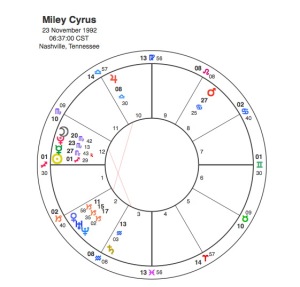 Miley Cyrus is an American singer, who burst onto the scene as a 14 year old as the star of the TV show, Hannah Montana, a programme about a school girl who is also a famous pop star. Her music career has continued to advance although she has recently attracted a lot of attention from some older female pop stars who are criticising her videos and live shows as being thinly disguised soft porn.  Cyrus is a heavy user of ‘ twerking ‘, a sexually provocative way of dancing which has been popular for a few years now. This has led certain sections of the media to throw their hands up in horror that all this stuff is widely available before the 9 pm watershed and is being avidly consumed by the same 7 year old girls that were glued to Hannah Montana.

The first thing that jumps out from Miley Cyrus’s chart is the Sagittarian Sun exactly on the Ascendant. Sagittarians are known for their directness of thought and action and their insistence on telling the truth as they see it, regardless of any offence it may cause. The only important thing is that its out there and if people have a difficulties dealing with it, that’s their problem. They have an openness and an honesty and you always know what they are thinking. Pushing boundaries is the what they do.

Whenever the Sun is rising the individual finds self expression very easy and natural. With the Sun bang on the Ascendant, the individual has no choice but to express everything that’s going on for her. It is the strongest place in the chart for the Sun and scores very highly in the charts of famous people.

Cyrus also has a close Moon / Pluto conjunction in Scorpio. The Moon in Scorpio creates an extremely passionate person with a strong sex drive. This aspect with Pluto would enhance this and create someone with a powerful sexual magnetism. These people are often drawn towards the darker methods of sexual expression and are driven by an intensity of feeling that is unusual. As a rule the Scorpio Moon is quite secretive and has a strong sense of self control so other people would be surprised at the kind of things they get up to. Miley Cyrus, however, has this aspect in conjunction with the Sun and Ascendant at the beginning of Sagittarius so there’s no chance of secrecy here. It’s all expressed strongly and directly like everything else.

The combination of the Sun, Moon, Ascendant and Pluto is very unusual. It would only occur for about an hour every couple of years or so. For Cyrus, it shows someone who has to be as sexually provocative as possible. In fact this is her job in this life and everyone else can either enjoy it or switch to the other channel. Such a strongly assertive character is not going to be put off by a bit of negative press. It will almost certainly push her to more extremes of provocative behaviour.

Pop music was always like this, of course. One of the main purposes of its existence is to shock the older generation, and as generations become more broad minded, the shock tactics have to be more extreme.  As the media debate about twerking has rumbled on many have made the natural comparison between Cyrus and Madonna. Madonna, of course played the same role twenty to thirty years previously and is still going strong. Madonna created a lot more controversy than Cyrus has but this is probably to do with the time that she was doing it. A comparison of the charts is absolutely stunning.

Both have the Sun, Moon, Mercury and Pluto in conjunction with the Ascendant. Its as if the spirit that propelled Madonna through those powerful early years of her career, jumped ship as she got older and reincarnated into the body of a teenage TV star. If anything Cyrus’ chart is more powerful because the aspects are closer, so its likely that she’ll be courting controversy for some time yet. Madonna of course was the only one doing it then and there are plenty of other copies now so its unlikely that Cyrus’ career will be anything like as powerful and influential but with all that Sagittarius, it won’t be for want of trying.

Another aspect of the Moon / Pluto conjunction is that it often brings people to prominence from a young age. The Moon rules youth and childhood and this conjunction is shared by Melissa Anderson and Mozart. In Madonna’s case it was experiences in her childhood that shaped her later career. For Miley Cyrus it was the phenomenon that was Hannah Montana.

As Pluto is conjunct the Sun, Moon and Ascendant it won’t make any major aspects for many years. In this case it is worth looking at other slow moving planets and its appropriate that Jupiter was transiting Cyrus’ stellium in 2006. Hannah Montana premiered on March 24, 2006, to the largest audience for a Disney Channel program, and its instant success helped propel Cyrus to teen idol stardom. The next two years could be difficult ones however as Saturn makes its first acquaintance with this group of planets and for once the brakes will be applied to her career. It could be that the criticism that she has recently received may be Saturn warming to its task but whatever the setbacks she will certainly reinvent herself and continue on her way. It will be interesting to watch the development of the astrological Madonna Mark 2.