It is a sad statement of affairs that Capricorn Research produces more articles on football during the summer than at any other time. Whilst the season is in process, my fix can be obtained watching and following it all unfolding, but in between times it can only be sustained by following the transfer gossip. So to distract myself from idle speculation about the transits of players who might be playing for another club completely in August, I have decided to focus on club football history.

So where to start, there is only one place, the 10 times winner of the European Cup and world’s richest and most talked about club, Real Madrid. Unusually for any football chart, we actually have a birth time. 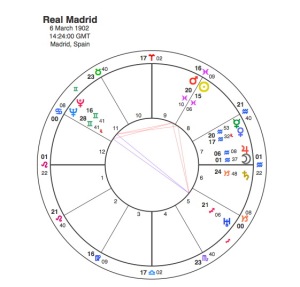 This is such an iconic chart, it could have been put forward as the one to symbolise the beautiful game itself.

The Sun is conjunct Mars, ruler of all sports in Pisces, the sign of the feet. In fact this same conjunction with the Sun at exactly the same degree exists in the chart for the first international football match ever played between England and Scotland in 1870.

But the fact that the Madrid chart has it as an apex to an immense T Square shows why Real have been such a dominant force in the game for most of its history.

Capricorn Research has studied the charts of many individuals born with the Uranus opposite Neptune / Pluto aspect in the early 1900s. This was a very rebellious and independent generation perhaps being fortunate enough to be too young to have fought and died in the First World War but coming of age in the Roaring Twenties.

In the chart for Real Madrid, this opposition shows a constant drive to break the mould. Its interesting that the T Square apex is on the 9th house cusp, because this is without doubt the most international of all clubs, both in terms of its global appeal but also because it has always  brought in star names from many different countries.

Throughout football history even the most successful clubs have held onto parochial values. This was particularly so in England where the football authorities refused to enter the World Cup for 20 years and would not allow any of its clubs to participate in the European Cup at first.

The Real chart also has an expansive and dominating Moon / Jupiter conjunction in opposition to a Leo Ascendant which says a lot about Madrid’s conviction that they are the greatest club by divine right and that will always be the biggest and the best.

Real jumped straight in with the European Cup and signed up many of the stellar names in world football at the time to make sure they dominated the competition as they won it in each of the first 5 years. This policy has continued right up to the present day.

This approach was mainly down to one man, the club president at the time Santiago Bernabeu Yeste who gave his name to the Real stadium that was rebuilt after being damaged during the Spanish Civil War. 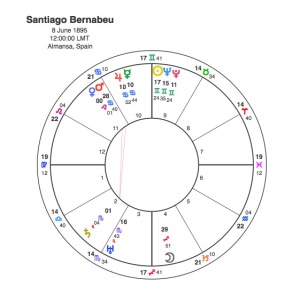 Bernabeu was born in 1895 also with the Neptune / Pluto conjunction but this was aligned with his Sun at 17 Gemini in close square aspect to the Real Sun.

Even with a powerfully dominant chart such as Real’s it always helps to have the powers that be on your side, particularly in a dictatorship. 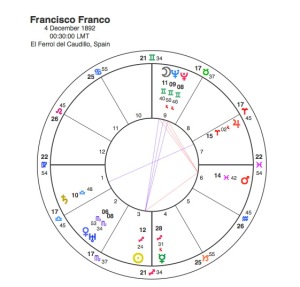 Fascinatingly General Franco was also born with the Neptune / Pluto this time conjunct his Moon and opposite the Sun.  Not surprisingly for a politician that owed his power base to military force, this opposition focuses onto an apex Mars. But the simply stunning piece of synastry here is the fact Franco’s Mars is at 15 Pisces exactly conjunct the Real Madrid Sun meaning that the club would be among the chief beneficiaries of his rule.

In fact in 1920 the club were granted the title Real ( meaning royal ) by King Alphonso XIII but were forced to drop it in 1931 when Spain became a Republic. After Franco’s victory in the Spanish Civil War, the title Real was restored.

Real’s arch rivals Barcelona were strongly linked to the Republican forces and have always been connected with the Catalonian independence movement. 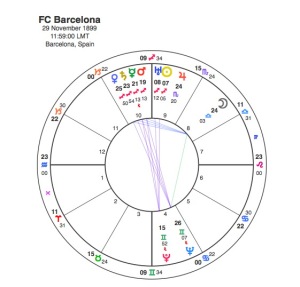 Interestingly the chart for Barcelona has a 6 planet stellium in Sagittarius, all of them are in conflicting square aspect with Madrid’s Sun and Mars.

Real’s connection with the Franco regime ensured they won the protracted battle with Barcelona for the signature of Alfredo di Stéfano. Di Stéfano had starred for the Colombian side Millonarios during a friendly tournament in Madrid.  Barcelona reached a transfer agreement with River Plate, who was still di Stéfano’s official employer according to FIFA.

However, this agreement needed the consent of Millonarios.  Franco bribed Barcelona’s “chief scout” Josep Samitier, who employed Joan Busquets, a director of Millonarios’ Colombian rivals Santa Fe to disrupt the deal. Real Madrid made an agreement with the Colombians.

FIFA, however approved Barcelona’s deal, but Franco’s government passed a law outlawing the purchase of foreign players. The government then arranged a deal which meant di Stéfano would play for Madrid.

Alfredo di Stefano won eight league titles and five consecutive European Cups with Real Madrid and is still thought of by some to be the greatest footballer of all time. For more information on his life and astrology see Alfredo di Stefano – Cancer’s Club v Country 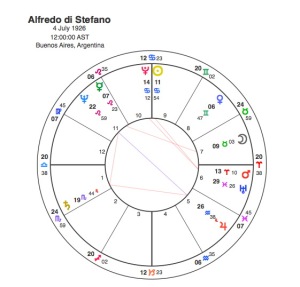 For this article its sufficient to note that di Stefano’s Sun was conjunct Pluto in harmonious trine aspect to the Real Sun ( and of course to Franco’s Mars ).

Ferenc Puskas was one of the world’s top players scoring 84 times in 85 games for the mighty Magyars of Hungary including 4 against England in their two famous victories in 1953.

His club was Honved of Budapest who were playing in the European Cup in Spain when the Hungarian revolution broke out. The revolution was crushed by Soviet troops and the Honved players decided against going back to Hungary. Puskas was banned for 2 years from football but signed for Real in 1958 in time to win 2 European Cups. 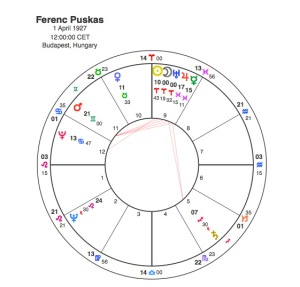 Interestingly for someone who took such a rebellious and assertive stand, Ferenc Puskas had the Sun and Moon in Aries with the Moon conjunct Uranus.

Fittingly Real’s domination of the European Cup from 1956 – 60 coincided with both Uranus and Neptune aspecting Madrid’s Moon / Jupiter / Ascendant combination.

A 6th European Cup was added in 1966 as both Uranus and Pluto were opposite the Madrid Sun but this was a turning point although it didn’t seem like it at the time. Madrid had to wait over 30 years for a 7th trophy.

The 7th was acquired in 1997 when Uranus and Jupiter were conjunct the Real Moon / Jupiter and the 8th in the following year as Neptune came to conjunct the Moon.

But a real change came between 2001 and 2004 as Pluto was square to the Madrid Sun and Mars. In July 2000, Florentino Perez became president and the galactico era was born. 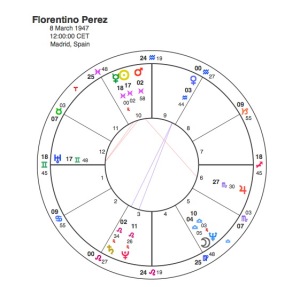 The synastry between Perez’s chart and that of Real is staggering. Their Suns are both conjunct each other in mid Pisces.

Perez Venus is conjunct and his own Moon is trine Real’s Moon / Jupiter.

Perez’s Moon is conjunct Neptune in Libra which shows a strong drive to create a beautiful environment full of the most glamorous stars.

Real had enormous debts in 2001, but managed to get their old training ground rezoned, resulting in a deal that earned them almost €500 million. This move hinted at a level of government sympathy not seen since Franco intervened in the Di Stefanio affair almost half a century previously.

They spent the proceeds on the Galacticos, including Zinedine Zidane, Ronaldo, Roberto Carlos and David Beckham. And just for good measure Luis Figo was enticed from Barcelona, a promise that got Florentino Perez the presidency in the first place.

Needless to say a 9th Champions League was delivered in 2002 as Pluto was square to the Madrid Sun.

But Perez’s plans turned out to be like many of the Neptunian variety, illusory. Manager Vincent del Bosque was surprisingly sacked, presumably for being a dour Capricorn and not nearly glamorous enough but for many the sale of Claude Makelele summed up the stupidity of the era.

Makelele was a defensive midfielder but his sale prompted Zidane to remark ” Why put another layer of gold paint on the Bentley when you are losing the entire engine ? ”

Claude Makelele was not a Perez / Real type player as evidenced by the fact that his Moon was in Virgo a place for people who do all the hard work behind the scenes and usually don’t get the appreciation for it. His Moon was also square Saturn but the main problem was that it was opposite both Real and Perez’s Suns.

Perez acknowledged his mistake and resigned in 2006 but roared back three years later splurging big money on a new generation of galacticos including Kaka and Cristiano Ronaldo.

Despite this the 10th Champions League, the Decima continued to elude them. Even employing Jose Mourinho as manager didn’t work, despite the fact that the Special One had his Sun conjunct Real’s Jupiter.

Many of Real’s greatest stars have been Cancerians, Zidane, Raul and di Stefano being prime examples, and it was Perez determination to break the world transfer record yet again that cracked it this time. Gareth Bale’s Sun is trine the Real Sun and Mars, and Jupiter was conjunct the Welshman’s Sun when he scored that breakthrough goal in the 2014 final, as predicted by Capricorn Research some months beforehand.

So what now for Real ?

True to form Florentino Perez has sacked Carlo Ancelotti the manager who won the Decima and replaced him with Rafa Benitez.

With Neptune conjunct and Saturn square to his Mars at the end of next season its hard to see Benitez delivering Champions League number eleven. Its true that the Real chart does have Jupiter opposite the Sun at the same time which might indicate more success or perhaps just another massive spending spree.

The next few years look uncertain however. Neptune is heading for a conjunction with both Real and Perez’s Sun from 2017 – 19. Normally this would not be a good sign for a football club, you would expect confusion, disillusion and even disintegration to set in and perhaps this is finally the end for the President.

Real are not an ordinary club however so we’ll just have to wait and see.

2 thoughts on “Real Madrid – The Finest Football Team that the World Has Ever Seen ?”