Most of the clips on TV’s You’ve Been Framed seem to be someone doing appalling ” Dad Dancing ” at a family wedding only to trip over an obstacle and spend the evening in A+E. If pushed to come up with an astrological symbol to reflect this experience it would be hard to beat Sun in Cancer opposite Saturn.

Yet even during its heyday, the programme never reached the kind of audience that witnessed Alan Pardew showing his touchline moves as the club he played for as a lad and now managed, Crystal Palace, took the lead 12 minutes from time against Man Utd in the 2016 FA Cup final at Wembley.

Those few moments seem to encapsulate the managerial career of Alan Pardew quite beautifully. He is known for helping to create a close family atmosphere at the clubs he manages often giving them a good start only for things to go horribly wrong as he falls flat on his face. 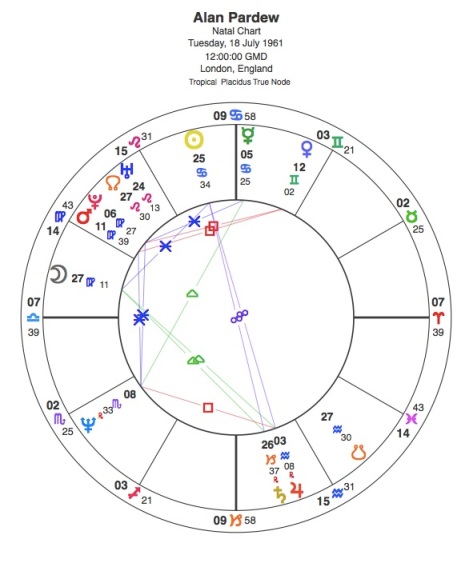 Alan Pardew has the Sun in Cancer very closely opposite a tough Saturn in Capricorn.

Both Saturn and Neptune were afflicting his natal Mars that day so despite his nifty moves ( Mars ) he was soon to have the rug pulled out from under his feet ( Neptune ) and hit a brick wall ( Saturn ) at the same time.

Less than seven months later, with Neptune still opposite his Mars, his family booted him out of Selhurst Park.

It has to be said that Alan Pardew has previous when it comes to ” issues in the technical area “.  He was sent to the stands after head butting Hull’s David Meyler. He was caught on camera calling Man City manager Manuel Pellegrini an ” f…ing old c…”, but he seemed to save most of his ire for confrontations with Arsenal’s Arsene Wenger whose Sun is at 28 Libra, making a tetchy T Square with Pardew’s Sun / Saturn opposition.

West Brom picked Pardew to save their season after Tony Pulis had been given the push with WBA hovering close to the relegation zone,

Many punters felt the best man to save the Baggies from relegation was Pulis himself  ( as a Capricorn his teams might be boring and pragmatic but he has never been relegated before ).

Pardew set about trying to make WBA play more attractive football with the result that 10 weeks later they were 5 points clear at the bottom of the table.

As a true Cancerian Pardew responded to this situation by taking his team on a bonding trip to sunny Spain.

What could possibly go wrong ?

Uranus transits will always bring an element of the unexpected and the planet has been forming a T square with Pardew’s Sun / Saturn this year.

Any astrologer worth their salt would have advised Alan Pardew against heading for the sun this week.

Mars ( the planet of driving ) is currently in Sagittarius, the sign of foreign travel but in exact square to Pardew’s own Mars which is still besieged by an opposition from Neptune ( the planet of deception ).

So 4 of the older ( Saturn ) members of Pardew’s family ( Sun / Cancer ) stole ( Neptune ) a taxi ( opposite Mars ) while in Barcelona ( a footballing city ruled by Sagittarius as the club have 6 planets in that sign ).

So what happens next for Alan Pardew ? Well it looks like trips to Barcelona will be soon be replaced by the somewhat shorter distance to Birmingham City with the chances that his next touchline antics will get no more viewers than the current version of You’ve Been Framed.