The Champions League round of 16 is Capricorn Research’s favourite of the whole competition. It is the first knock out round when the big teams seriously come together, and the excitement is magnified because of the winter hibernation.

For English fans its even greater this year because 5 participants made it this far for the first time ever. Some truly massive clashes add spice as well.

One problem for astrologers looking at contest charts in this competition is that the games all start at the same time so its difficult to know which game the chart refers to, so if you’re going to chance using this method you have to apply the chart to the match that has the highest profile and attracts most interest.

The way the round of 16 matches are arranged makes it easier as there are only 2 games each evening and although there is little difference between the charts for Turin and Basle, there’s no contest in terms of where most attention was focused last night.

Most punters would have expected Man City to win in Switzerland although the magnitude of the result may have some of the powers that be worried about the quarter final draw.

But for sheer intrigue it has to be this one. 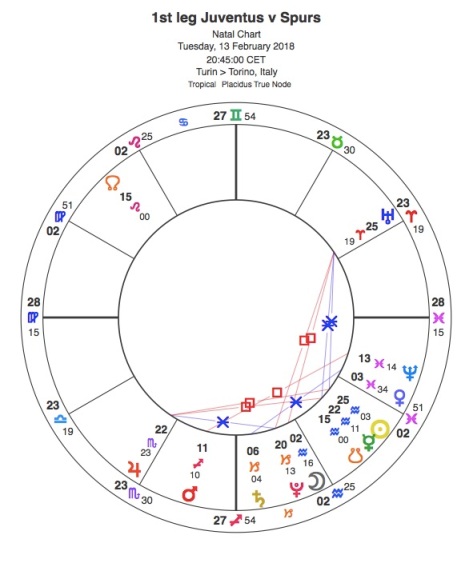 The late Ascendant is always a bit of a worry owing to the horary considerations of judgement, but Capricorn Research tends to dismiss these concerns as belonging to a time when there might be a reasonable doubt around the calculation of the rising degree.

It certainly doesn’t seem to have affected this chart.

The planets dignitaries are often a good description of how the two teams are placed coming into a match.

Mercury is exalted in Aquarius which makes sense as Juventus have so much experience in the Champions League and are currently on a long undefeated run.

Jupiter for Spurs in Scorpio is strong but has no essential dignity.

The one thing that is a worry for the home side is that Mercury is combust which suggests they would be much weaker than expected.

The Moon is in Aquarius applying to a conjunction with Mercury, which would normally be the sign of a win for the home team, but it also applies to a sextile to Juventus.

Mercury and Juventus are both at 22 degrees of their signs. So a draw is the obvious prediction.

As the Moon reaches Mercury first, it is fair to assume Juventus would score first, which of course they did, being 2-0 up in the first 10 minutes.

So the chart predicts the result pretty clearly although apart from Mercury’s combustion it doesn’t really indicate how much better Tottenham were than their illustrious opponents.

Thursday’s solar eclipse occurs at 27 Aquarius, so we have to ask the question whether that impacts on the result.

Juve’s ancient goalkeeper Gianluigi Buffon has said that he will finally retire this summer unless his club wins the Champions League. Buffon is a Sun Aquarius and Juventus has the Moon in the sign.

Are we seeing the eclipse of the ” Old Lady ” ?

See Get Ahead of The Game to find out.