Just over a year ago I wrote an article titled ” Is There a Place For Pisceans in Football ? “ This was about Nicolas Anelka in the light of a goal scoring salute that may or may not have had antisemitic intent.

But the events of the last 24 hours have shown that there is a place for Pisceans and it seems that place is running the whole show. If there is a record for the number of insults, criticisms and jokes on social media about one person it must surely have been broken this week. But will any of it stick and change anything ?

The answer from yesterdays vote is an emphatic no, or at least not quite yet anyway. We all know Pisces is the most difficult sign to pin down, its like trying to catch a handful of water from a flowing stream. Fluidity in movement, malleability is its nature.

It is the last sign, it has to absorb and mop up all the past experience of the previous 11 signs and disperse it into the void, in order to allow a completely fresh start to occur in Aries. More than any other sign it has to face that Neptunian theme of dissolution, of losing one’s sense of self and even what most would call reality.

So many people are asking what is Sepp Blatter actually for ? If there is order in the Universe, how come he is still in charge of FIFA ?

All signs have their good bits and bad bits. We know that each has the potential to express its noblest virtues but also its lowest vices. Pisceans can be highly evolved spiritual teachers or con men, crooks and thieves. The trouble with this sign is its sense of itself is so fluid, how can any of them be sure what level they are functioning on ?

So when Blatter reaches out his hand to his ” dear friends ” promising to lead us out of the current chaos to the promised land, the sensible thing might be to keep our own hands stuffed firmly in our pockets particularly as what we see in front of us is an abyss.

You only have to look at him after all. The Gnome of Zurich looks like one of those little aliens on Star Trek pointing us innocently towards a wormhole when we all suspect that what faces us on the other side is an army of Kardashians with weapons already powered up. So we might ask what kind of Piscean is he anyway ?

On the face of it you might think harmless enough, the Moon in Libra gives him that sweet talking, charming, diplomatic and persuasive side that has managed to get so many countries to back him all these years.

And Leo rising shows the image of leadership together with a generosity of spirit. This is what he projects but we need to look deeper than this. What is he actually being generous with ?

Look at the Sun, it is in the 8th house. This house is a strange one, all we can be sure of is that the true motivations for someone with the Sun in this position are not what is portrayed by the Leo Ascendant. The 8th is the place of other people’s money.

But further examination of the chart can show us where it goes. Any opposition creates a certain energy or tension, in this case financial. If there is a TSquare planet that is square to the opposition this energy is forced out in that direction. Blatter has a T square pointing to an apex Jupiter in Sagittarius on the cusp of the 5th house.

Jupiter is the great benefactor, the planet of largesse, Sagittarius is all about abroad and foreign countries and the 5th house is that of children. So if this chart belonged to an ordinary person, he would probably be an ageing con man laundering his ill gotten gains through his childrens’ bank accounts which would probably be based in some offshore tax haven.

If we think of the 5th house in this situation as corresponding to new young footballing nations, Capricorn Research trusts that the reader can get the picture.

The thing with Jupiter is that it’s always convinced that all its actions are for the greater good. No doubt Blatter would claim he has the noble aim of spreading football to the darkest corners of the world and supplying places like Sierra Leone with astroturf and their children with football coaches to save them from a life of drugs and crime.

Or it could be something to do with there being 209 FIFA votes available and only 56 of them are in Europe.

Another interesting thing about Blatter’s chart is that this gentle and diplomatic Libran Moon is opposite a dynamic, aggressive thrusting Mars in Aries in the 9th house of foreign travel.

So apart from the USA, which for some reason Sepp hasn’t found time to visit recently, he’s constantly off everywhere doing that Moon in Libra 3rd house, charming talk and deal arranging just to seal it with a snatch your arm off Mars in Aries handshake.

Having Mars in Aries on the 9th house cusp is such an important factor, its no wonder he is the seemingly permanent head of FIFA. 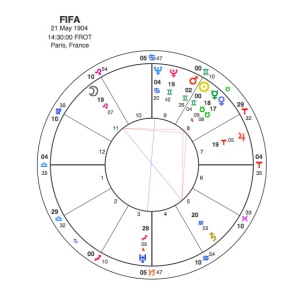 As you can see the FIFA chart also has Mars on the 9th house cusp in Gemini in conjunction with its Sun. This is absolutely what would be expected of a global ( 9th house ) sporting ( Mars ) organisation.

But its also very interesting to see the main thrust of this chart through its very own T Square. We have the grand scale noble social ideals of the Moon in Leo in the 11th house but this is in opposition to Saturn in the 5th, again suggesting some kind of dark shady arrangements with children / new footballing countries.

This opposition focuses by T Square onto a twin apex Mercury, the trickster and Venus the planet of money in Taurus, the sign of money, in the 8th house, the place of other people’s money.

Saturn came into the FIFA’s T Square in the Autumn of 2013 when various newspaper reports brought news of dodgy dealing. It stayed right through the 2014 World Cup and it was only the wonderful entertainment of the tournament itself that spared the governing body from the intense focus and criticism that was constantly in the news.

This last week Saturn has been opposite FIFA’s Sun and Mars and its planning to stay there until the end of October.

Capricorn Research is a self confessed football addict that gets very twitchy during the close season and has often advocated World Cups to be played every summer. FIFA will certainly regret not having a tournament this year, if only just to take away some of the media focus that Saturn’s transit will bring.

FIFA will survive, even if it gets a good kicking over the next few months but what about Blatter ?

Another way of looking at his T Square shows Sepp to be constantly under criticism ( Sun conjunct Saturn ) about money matters ( opposite Neptune in the 2nd ) but he’s such a slippery customer ( Pisces ), he always comes out of it with his standing actually enhanced ( T square apex Jupiter ).

Yesterday’s election is a case in point. 133 votes to 73 is a strong show of support whatever the Europeans say. So will this always be the case, are we stuck with Sepp forever ?

The answer is No. Unfortunately this election came just a bit too early. Saturn is so busy with FIFA’s chart at the moment that it hasn’t quite got round to Blatter’s yet….

One very interesting feature is that Sepp has a T Square made up of his Sun and Jupiter, Saturn and Neptune. All three planets will renew their acquaintance with this T Square over the next few years.

Jupiter does this in October / November this year, so once the dust settles after FIFA’s own Saturn transit, it will probably appear that Sepp has got away with it.

Jupiter is there again in February and March 2016 and again in July but by this time Saturn will have started to impact. Saturn starts to makes its influence felt even at the beginning of 2016 as its square its natal position but its true impact will build slowly throughout the year until it’s square to Blatter’s Sun in December.

But the other more scary thing is Pluto. Both Pluto and Uranus have been chipping away at Blatter’s position for a while now, in aspect to his Mars since the summer of 2013. Uranus opposed his Moon during the summer of the World Cup and again during April, but Pluto square his Moon is a different matter.

Pluto crept up very close to square Sepp’s Moon this Spring, but in the last few weeks has started going backwards. Its as if it’s just on reconnaissance, checking out its next victim.

It will be square his Mars again for the whole of the second half of this year and then comes to actually square the Moon in the New Year. It will be there until March, again in May to August, again in November to January 2017 and again in August to November the same year.

That’s one thing about Pluto, its thorough, it doesn’t just content itself with the standard planets’ transit of 3 times hitting its target. It will often go for 5 bites of the same cherry.

So even if the Teflon coated Sepp Blatter has survived this week, Capricorn Research really can’t see him getting beyond 2017.

And even the slipperiest Piscean will have to fall off the edge into the abyss when Neptune conjuncts his Sun in 2020 – 21. We all just have to make sure we’re not holding his hand at the time.