The greatest gift that Astrology can offer a person is an acceptance of their own true self and the path they have to follow in life.

Of course, everybody says that people are different and it would be a very boring world if we were all the same. But this common recognition of difference for most people is very marginal, and it doesn’t take much for someone to veer away from their invisible line to be labelled as not normal.

Astrology states that every single individual is different and not only that they are meant to be so because they are a representative of a unique moment in time, which has as much validity as any other moment.

Most of the suffering in the world comes from people not recognising this simple fact in either themselves or others and a potent field for this kind of suffering is the area of sexual identity.

Our culture has struggled to come to terms with homosexuality over the last 50 years, at least now we can say that with the acceptance of gay marriage, our society has taken some important steps  in the recognition of difference. Homophobia like racism is a punishable offence, but it still lingers in the unconscious of many people.

Many of people’s fears around homosexuality are based on a misconception that there is a simple division along sexual lines. You are either gay or straight. This assumption creates serious problems because in truth there are as many different expressions of sexuality as there are sign and house positions of Mars, Venus and the Moon and the many aspects that each of these can make to each other and all the other planets create a situation of utmost complexity.

Sexuality and even sexual identity surely must be a spectrum. Someone with Mars conjunct Jupiter in Aries cannot really be talking about the same experience as someone with the Moon conjunct Saturn in Virgo opposite Venus / Neptune in Pisces.

It may well be that a man with the latter combination would have a number of doubts about their own emotional and even sexual expression. But the division of sexuality into a simple two camps can cause a great deal of pressure to be placed on anyone to make sure they are seen in one of those camps or another. It can also account for a certain vilification of people in the opposite non existent camp in order to prove that the person making the comments belongs to the side of ” right “.

This is particularly the case for teenagers who are dealing with profound changes in their own sexual and emotional development. Capricorn Research has to admit to being quite homophobic in his teens. It is now recognised that most of this was based on the fact of having a chart where everything bar Neptune and Pluto are in female signs and even houses so naturally felt out of tune with society’s definition of masculinity in the 1960s.

There is always a pressure on young men to have Mars in one of the Fire signs so having it in Pisces was the cause of a lot of internalised suffering.

This in many ways was why the discovery of astrology in the early twenties was such a radical and profound turning point. The understanding that being a triple Capricorn with Mars in Pisces was what the Universe required of me utterly changed my life.

The one saving grace was that the Moon, Venus and Mars were all in flowing sextile or trine aspect so this meant adjustment to and acceptance of these placings came relatively easily.

One can only empathise with people who find themselves with more difficult combinations.

Some feel so out of synch with their own bodies and societies expectations of them that their only recourse is to change their sex.

Astrologically what would  be required for someone to take such a radical step ? The answer is probably not as dramatic as you might expect. 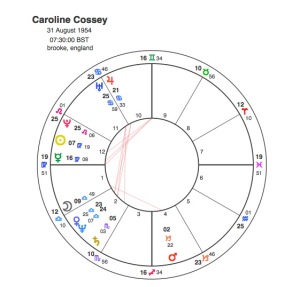 Caroline Cossey has the Moon in Libra along with an exact Venus / Neptune conjunction. A moment’s reflection on that combination would probably bring forth images of someone who was extremely attractive, so much so that they might have iconic status and be captured on film. If its revealed that Cossey was a  ” Bond girl ‘ a look at her chart would naturally confirm this.

However Caroline Cossey was born a man, initially called Barry.

Raised in a close and loving family, Barry was nonetheless an unhappy child. He felt a misfit, he loathed the pursuits of boys and wanted to play with the girls.

This would be understandable, that Moon, Venus and Neptune in Libra is a very feminine combination and its not the kind of thing you’d expect on the rugby fields.

Its also probably true that certain signs are more comfortable and confident during their teenage years than others and that Virgo would not be one of them.

So with the Sun and Ascendant in Virgo and Moon, Venus , Neptune in Libra its not completely incomprehensible that Barry wanted to be a girl.

But to opt for sexual reassignment is quite a drastic step.

As Caroline Cossey has all of her planets within one half of the chart, there are only 2 major aspects there. In Capricorn Research’s experience this tends to emphasise the effect of the ones that are there.

The Moon is in Libra in the 1st house in square to Mars in Capricorn in the 4th. Mars is so much to do with the masculine energy and Capricorn is a symbol that fits very easily with society’s expectations. The 4th house is our inherited past.

Barry’s own personal image ( Moon in Libra in the 1st ) felt very out of step ( square ) with the expectations of the male body that he’d  been born into ( Mars in Capricorn in the 4th ).

The other aspect is a square from Venus / Neptune to a Jupiter / Uranus conjunction.

This seems to suggest that Barry had an idealised vision ( Neptune ) of feminity ( Venus ) and a strong desire to free himself ( Jupiter conjunct Uranus ) in that direction.

So at the age of 17 he began taking the first steps toward sexual reassignment.

Of course Pluto is the planet of transformation and we would expect it to be involved in such a situation. The transiting Pluto was conjunct his Moon when Barry became Caroline in 1976, obviously the turning point of her life.

Just to make it clear, this transit is a once in a lifetime occurrence. I would defy anyone to read this or any of the pages on this website and maintain that there’s nothing in astrology. Unfortunately the only people likely to read it are already converted so evidence like this will just give them extra confirmation of their experience.

It is difficult to get birth times for Transgender subjects, but Capricorn Research does have a collection of 34. Whilst this is a small sample it throws up some very significant results.

The average distribution per sign or house would be 2.83.

Like Caroline Cossey, Virgo is the most common Sun sign with a score of 8. This score is equalled by Mars in Virgo.

The strongest sign in general however is Scorpio with The Sun in this sign scoring 4, the Moon 5, Mercury 5, Mars 4, the Ascendant 4 and Venus a whopping 9.

If ever there was an astrological symbol that could describe a sex change it would have to be Venus in Scorpio.

The  ” p ” figure for the Venus sign distribution is 0.008, well beyond the figure 0.05 that statisticians require in order to establish a link. This figure is almost unheard of in such a small sample.

The 9th house seems to be prominent as Mars is there 8 times and Uranus 7.

Neptune appears in the 1st house 6 times, which may point to a shared uncertainty and confusion about the body and appearance.

The most interesting aspect has to be Uranus conjunct the Ascendant which occurs at a frequency of 287% of the expected number of times.

Neptune has an important role to play. As in Caroline Cossey’s chart it is conjunct Venus twice as frequently as expected.

The relationship between Neptune and the Moon is significant with the conjunction occurring at 159%, the opposition at 264% and the square at 232%.

Neptune is both conjunct and square Mercury 264% of the expected number of times.

Venus continues with the Scorpio theme as it’s aspects with Pluto produce the following results : Conjunction 199%, Opposition 199%, Square 132% and sextile 199%.

Interestingly enough the most common aspect is Venus sextile Mars occurring at 301% of the expected figure.

The most interesting thing about all these results is that apart from the 9th house scores, they are pretty much what most astrologers would expect.

Coming back to Caroline Cossey’s chart, we saw that she had the operation when Pluto was conjunct her Moon. It would be interesting to note what happened when the same planet reached her Venus / Neptune conjunction.

This transit occurred in 1981, by now Caroline was a model working under the name Tula. She appeared in ” Playboy ” in 1981. She was also cast as an extra in the 1981 James Bond film ” For Your Eyes Only. ” Pluto conjunct Venus / Neptune indeed.

Its important to remember that Cossey’s Venus / Neptune was square her Jupiter / Uranus conjunction. Shortly after the film’s release, the tabloid ” News of the World ” came out with a front page headline that read “James Bond Girl Was a Boy.”

Uranus of course rules the media and she was outed on a Jupiterian scale.

By her own accounts, Tula was so upset she contemplated suicide ( Venus conjunct Neptune, the planet closely associated with taking one’s own life ). However, she continued her modelling career and responded by releasing ”  I Am a Woman ” her first autobiography in 1982.

A pretty impressive all round transit performance by Pluto there. After this one the distant planet took at rest and let Neptune have a go.

In 1984, with Neptune and Jupiter conjunct her Mars and Jupiter also square her Moon Caroline met Greek shipping tycoon, Elias Fattal, and he proposed 18 months later. This presented two problems as she would have to convert to Judaism and she would have to reveal that legally she was a man. In the following two years she took instructions for the religious conversion. With a wedding date set for May 1989, she won her battle to be declared legally a woman. At her Jamaica honeymoon, Caroline felt herself the happiest woman alive.

But this was to be short-lived because Neptune, Saturn and Jupiter were square her Moon and Uranus was conjunct her Mars in 1989.

The newlyweds returned to London in June. They were met by Caroline’s mother and sister who handed them the Sunday tabloids. In brutal journalism, Caroline was portrayed as a gay gold-digger and Elias as warped. Elias had never told his parents the whole story and his family now closed ranks. The marriage was annulled and Caroline was legally forbidden to ever speak to or contact Elias again.

In 1991, with Uranus now square to her Moon, Caroline published her second autobiography, “My Story.”

In September 1991 with Jupiter conjunct her Sun she became the first post-operative transsexual to pose nude in Playboy magazine.

In 1992 with Jupiter conjunct her Moon, she married Canadian architect, David Finch, having announced her engagement on the “Shirley” show. An interesting question is whether the knowledge of their birth chart would have made changes in a person’s life. In Caroline Cossey’s case, probably not as she still had the courage to go through with the operation and to pursue a modelling career, despite the opposition that she received on the way. It is likely though, that an awareness of her rightful place in the overall scheme of things would have made her life a lot easier, however.

Knowledge leads to acceptance. Ignorance leads to the News of the World.