Heard of any of them ? Quite possibly not, but all these men reached their career peak when they took their national teams all the way to the World Cup Final.

Even if you haven’t heard of them, its likely that they will be highly thought of in their home countries for their achievements.

Unlike Raymond Domenech who you probably have heard of.  Not for taking France to the final and within a whisker of winning the 2006 World Cup, but for the much more serious crime of bringing astrology into disrepute.

Not that using astrology to pick your squad is a bad idea, its the most sensible move I have ever come across from a football manager. It’s just that you have to have some understanding of the subject first. 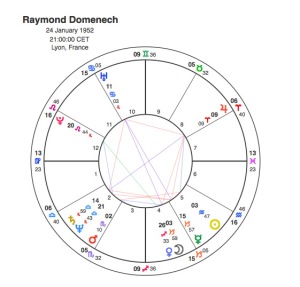 Interestingly, Raymond Domenech has the kind of chart a lot of astrologers would kill for. So many of them love Aquarius so much, they probably want to be one.

And what better to have Mercury, Uranus and Jupiter in aspect to each other ?

The only problem is these three planets are part of a Grand Cross which includes Saturn.

So Domenech’s interest in astrology gets him into trouble.

He famously complained that the French media had portrayed him wearing a wizard’s hat. Mercury, Uranus and Jupiter gave him such a hat but as a complete novice, the squares between the planets made it far too big for him and it came down over his eyes.

And Saturn’s role in turning his T Square into a Grand Cross, well and truly sorted him into the footballing equivalent of Slytherin.

One quote in particular places him squarely in the astrological Crabbe and Goyle camp.

“When I have got a Leo in defence, I’ve always got my gun ready. I know he’s going to want to show off at one moment or another and cost us.”

Well a few Leo defenders spring to mind and there are some including Joleon Lescott and Titus Bramble that even their own fans would keep a gun handy. Others like Giorgio Chiellini, Miguel Angel Nadal and Marco Materazzi, against whom such weaponry wouldn’t be much use.

This does just sound like a knee jerk dissing of your opposing Sun sign. But it had nothing compared to his contempt for Scorpios. He claimed they worked against his own interests.

Why was that ? Scorpio is another Fixed sign which pulls in a very different direction to his own Aquarius, but more particularly Domenech had Mars in Scorpio in exact square to his own Sun so he was bound to fight with them.

He famously refused to pick Robert Pires because he was a Scorpio.

This was a particularly stupid thing to do because if there’s one sign you would want with you in the World Cup its Scorpio.

A while ago Capricorn Research picked a Cosmic Fantasy League based on Sun signs. Scorpio won easily but with a forward line of Garrincha, Pele, Gerd Muller, Maradona and Luis Figo its not that surprising. Marco Van Basten and Ian Rush had to settle for a place on the bench.

But in Robert Pires’ case, its not surprising Domenech didn’t want him there. 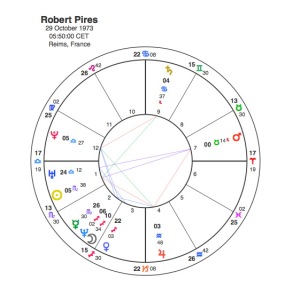 Pires’ Sun was conjunct Domenech’s Mars and Pires’ Mars was square Domenech’s Sun, so not much love lost there then.

Pires’ Saturn was also opposite Domenech’s Moon so you can see why the manager was concerned about him.

When researching this piece, I came across a comment from a fan that suggested that Robert Pires was quite skilled when playing ” away from home ” much in the manner of Ryan Giggs and John Terry and that this might have contributed to his losing his place in the national side.

Now Capricorn Research has no way of knowing whether there was any truth in this suggestion but a Scorpio Sun opposite Mars in the 7th house might point that way.

In which case ” dropped for being a Scorpio ” is a delightful astrological euphemism that I will endeavour to use from now on.

Raymond Domenech was like England’s Glenn Hoddle who was sacked for expressing his views on the past lives of disabled people. Hoddle may not now be forced to share a weekly discussion on tactics with the likes of Michael Owen and Ian Wright if he had shown a slightly more sophisticated understanding of the principles of reincarnation at the time. For more info on this see – Will Glenn Hoddle be Reincarnated as a Manager ?

He would certainly have kept the England job if he’d won the 1998 World Cup.

The same applies to Domenech’s case. If he had won the 2006 World Cup he would have been lauded rather than pilloried and kept his job for longer. And if his grasp of astrology had been a touch more rounded, France may well have won it.

The final went to penalties and was won by Italy, but the whole mood of the match was changed right near the end of extra time, when the French captain, the impeccable Zinedine Zidane was sent off for head butting Marco Materazzi, after the Italian had made some reference to his mother.

For Zidane, it was an extraordinary end to his career accompanied by all kinds of witty comments like ” Murder on Zidane’s Floor “. It was as if something in him decided to ruin his reputation. Maybe he felt he needed a bad boy image to be considered among the truly greats like Maradona and George Best.

Or maybe it was just in his chart. 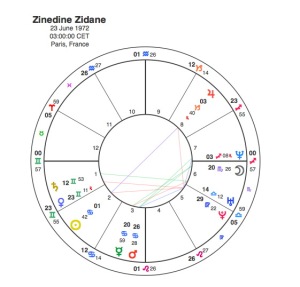 When thinking about great footballers, one doesn’t normally consider Cancer as a great sign, but this is a mistake.

Because in the Cosmic Fantasy League a forward line including Messi, Platini, Di Stefano, Bale and Zidane came 2nd to the Scorpios.

Zidane’s Sun in Cancer was opposite Jupiter, expanding his instinctive gifts to an extravagant level. But this opposition focused by T Square onto an apex Pluto to guarantee an explosive result.

Up until 2006, this T Square had simply worked through Zidane’s finishing power especially in the 1998 when Jupiter’s transit in trine to his Mars brought him 2 goals in the final against the favourites Brazil and the World Cup to France for the only time.

But by 2006, Pluto was about to transit back into that T square, opposite his Sun and over the next couple of years, Zidane retired with his reputation in tatters.

But maybe Domenech should have seen the head butt coming. With a little bit more knowledge of astrology, it would have been possible.

For one thing, Zidane’s T Square was firmly planted on Domenech’s Moon in Capricorn in the 4th house clearly showing the captain’s impact on his manager’s reputation at home.

And perhaps if Domenech’s suspicion of Scorpios had extended to include the Moon, Zidane might not have been playing in that final.

But the one think for sure is that Domenech’s comments about Leo defenders would come back to haunt him. 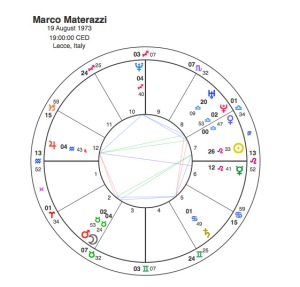 Marco Materazzi’s fall to the ground after Zidane’s headbutt would have been admired by any Leonine actor. Having the Sun in that sign he spotted an opportunity to wind up his opponent and truly made the most of it.

Having Saturn exactly conjunct Zidane’s Sun and opposite Domenech’s 4th house Moon shows the impact that Materazzi had on the careers of both.

At the time Pluto was trine Marco Materazzi’s Sun. Not only did he get Italy’s equalising goal in the final, but he also scored a penalty to help put the French out.

But perhaps the bigger question in all this is if there was only manager in the history of football to use astrology to pick his team, why did the Universe dump his team out on penalties by giving him Saturn to plague his Mercury ?

Capricorn Research has long been convinced that the powers that actually run things in the cosmos do not want all and sundry to know about their astrological methods. It seems to work better if the vast majority of astrology’s targets are completely unaware of the circle on their backs.

Why else would the research tools and opportunity to prove that astrology works – The Capricorn Astrology Research Project  be given to someone with his Sun and Moon in that sign in the 12th house ? The obvious cosmic intention is to ensure hardly anyone would read it.

And having a strong Saturn would suggest that many of the people that do would just dismiss me as an idiot for it. But in a world packed full of muggles, I’m honoured to be pilloried for wearing a wizard’s hat.